Salads in a jar! Mason jar salads! They're the hottest thing since....salad on a plate. 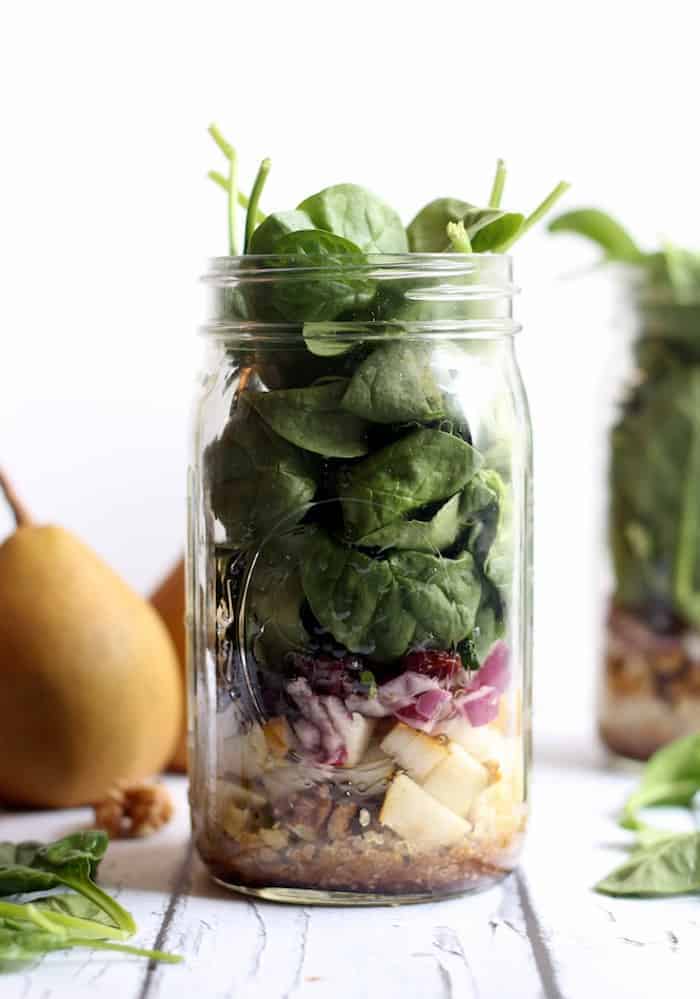 I turned my Mediterranean Quinoa Salad into a salad in a jar for yesterday's news segment and everyone went bonkers. There's something magical about dumping a bunch of layers into a bowl and watching it turn into a salad before your very eyes. Like, how in the world did that just happen.

Ya know how lately I've been talking about how I haven't been in the mood to cook? Welp, these Mason jar salads have been the answers to all my prayers. Since my desire to cook is fleeting, I've been trying to take advantage of the ten minutes when I feel like making something that doesn't involve Hummusapien or Alchemy and make as much as humanly possible in that itty bitty time frame.

These are SO simple. Since the dressing is at the bottom of the jar, you don't have to worry about the greenies getting all funkalicious. They stay nice and crisp while the goodies at the bottom soak up the vinaigrette. BADA BOOM CHICKA BOW WOW BOMB DIGGITY. 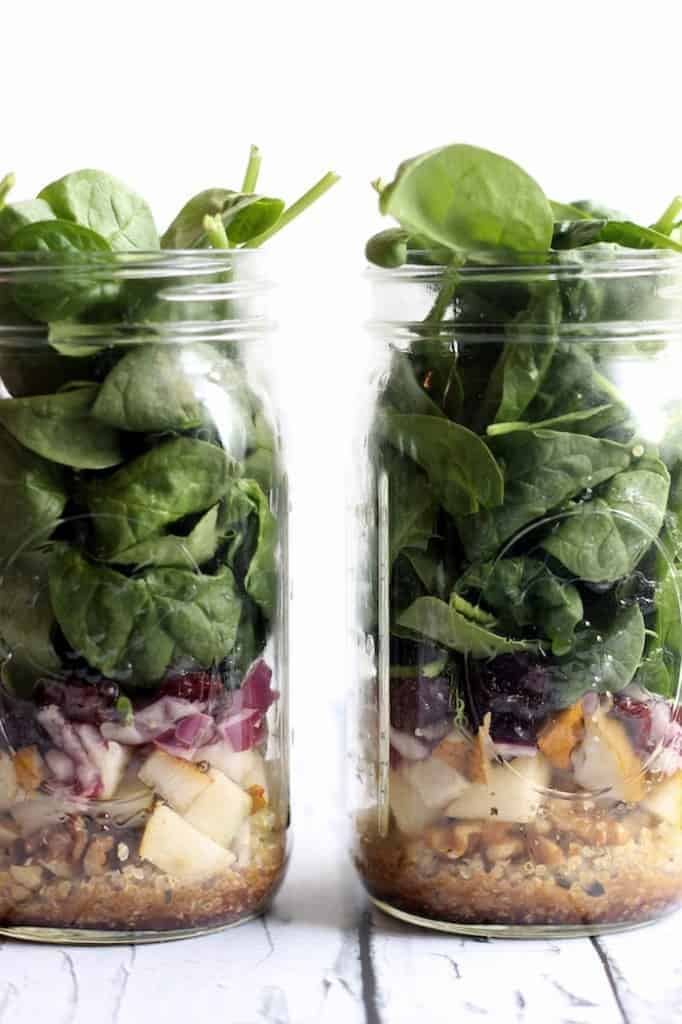 When I saw that Taylor's Gold pears were on sale for $1.99 at Whole Foods Market Upper Arlington, I was initially going to make them into muffins. Who doesn't die for a juicy, sweet pear stuffed into a muff? The issue is that I always bake up forty seven things and then think, "Wait. Why did I just make MORE baked goods when I don't have any food to eat for actual meals?!" Muffins are not meals. Or are they?

Then there's the frozen quinoa. Yes, it's of course a tad pricier than buying it dry in bulk, but sometimes you just want to whip up your lunches in a flish flash without having to turn on the stove. Can I get an AMEN! 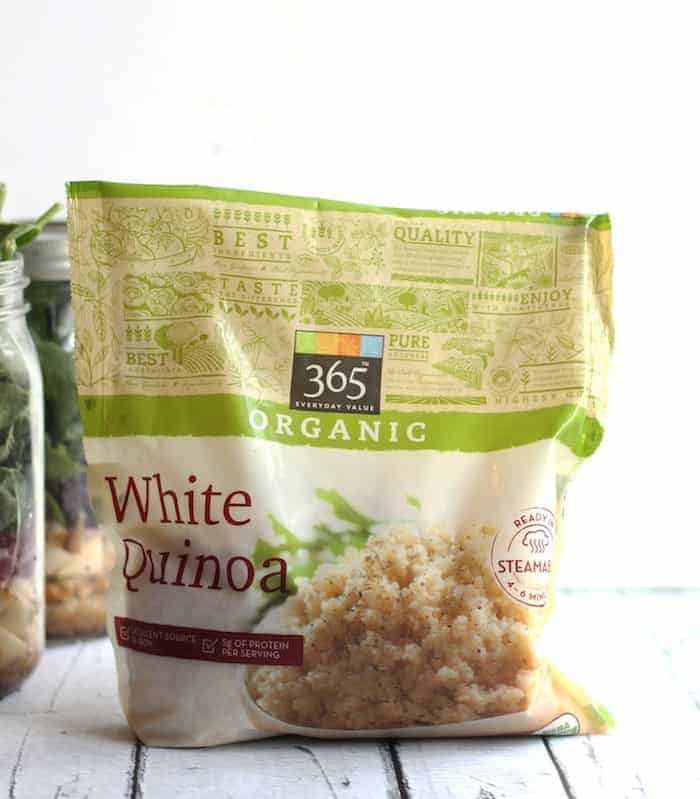 Microwave the bag of quinoa. Whisk together the four-ingredient dressing. Chop walnuts, onion, and pears. Layer. A monkey could make this salad!!

If microwaving frozen quinoa and making Major jar salads ahead of time will make you all eat healthier, than so be it. Sometimes it's well worth it to spend that extra dollar on a convenience item if it means the difference between cooking at home or calling for take-out. 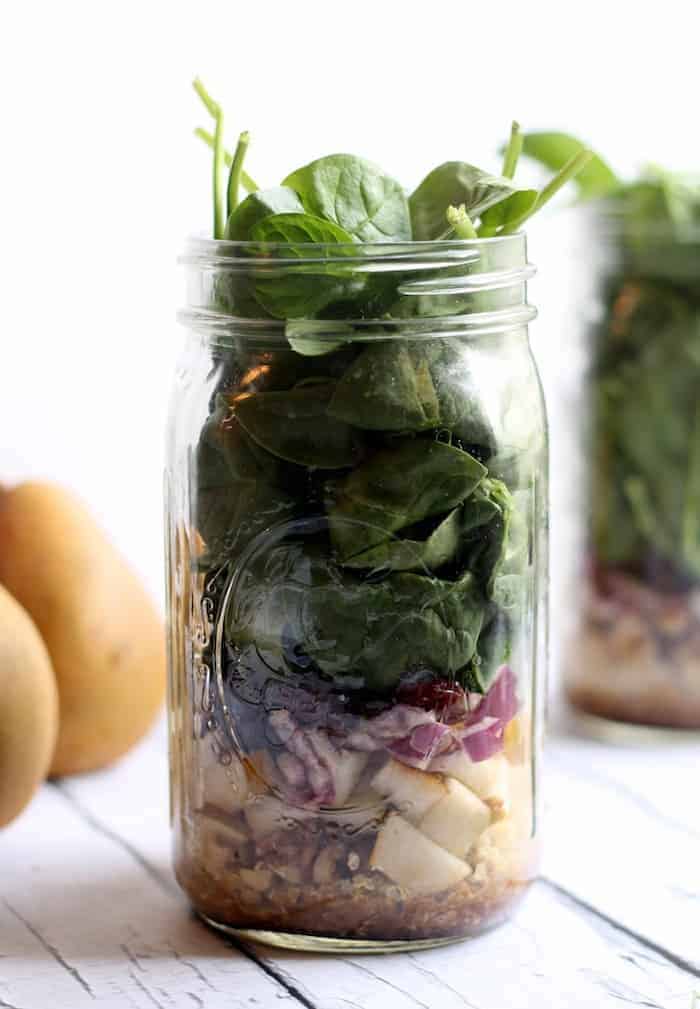 So make a few of these on a Sunday night and put it in your lunchbox with a big bowl for dumping. Hey lunch (for Monday, Tuesday, Wednesday, and Thursday), you just got SERVED.

For the maple balsamic dressing:

[Tweet "Make these Pear, Quinoa, and Spinach Salads in a Jar for the work week! via @TheHummusapien @WholeFoodsUA"]

This post is sponsored by Whole Foods Market Upper Arlington as part of our ongoing partnership. Thanks for supporting the companies that make Hummusapien possible!