This Creamy Chocolate Blueberry Smoothie is packed with superfood and naturally sweetened! With 14g of fiber and 7g of protein, it's the ultimate drink. 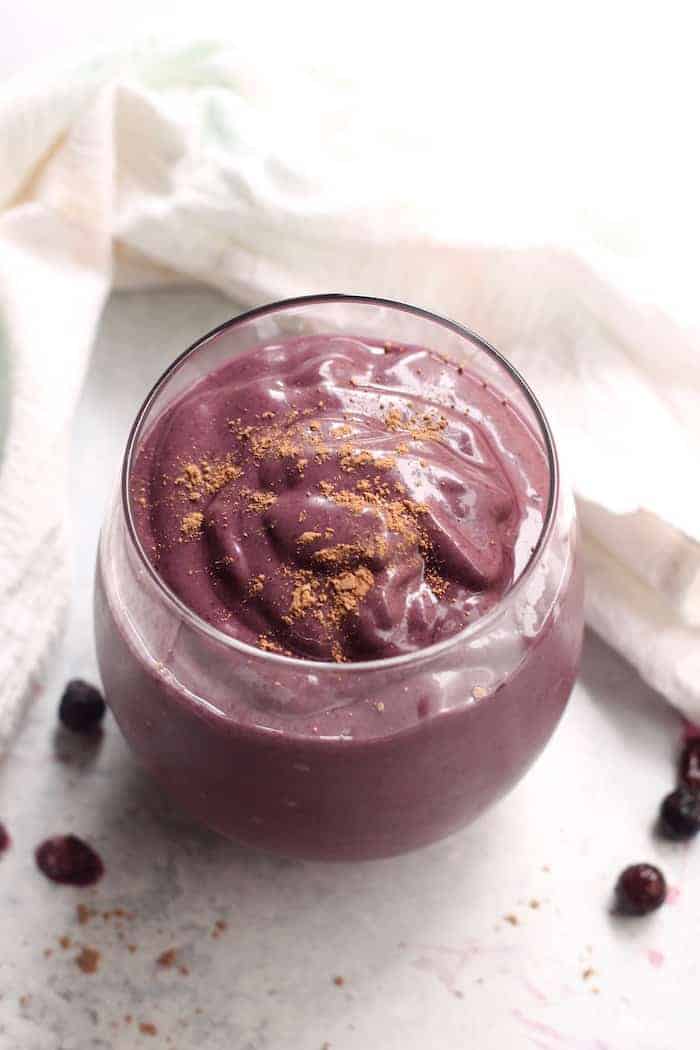 I don't know what it is about the chocolate + bloob combo but I'm in a committed relationship with them both.

Everyone is okay with it.

The Blueberry Cacao Smoothie was the first smoothie I knew I just had to put on Alchemy's menu a couple year's back (followed closely by the Snickerdoodle). There were skeptics at first, but customers were quickly won over by the epic marriage of blueberries, cacao powder, avocado, vanilla extract, hemp seeds, and Ohio maple syrup.

It's now one of our best-selling smoothies and I have a feeling that's not gonna change any time soon. Today's recipe is different than that smoothie (gotta keep something secret!) but it's equally amazing in its own way.

I was never ever ever one to put ice in my smoothies until I made Megan's Peanut Butter Cup Shake a couple days ago and my life was forever changed. Like how did I live before this ice in the smoothie thing?!

Now lookie here. I don't own an ice cube tray nor does my freezer make ice for me...so obviously I googled "how to make ice without an ice cube tray" and proceeded to freeze a large ziplock baggie full of water, hammer it into chunks, and call it a day. It worked like a dream.

Woudya look at that SHEEN!!!! 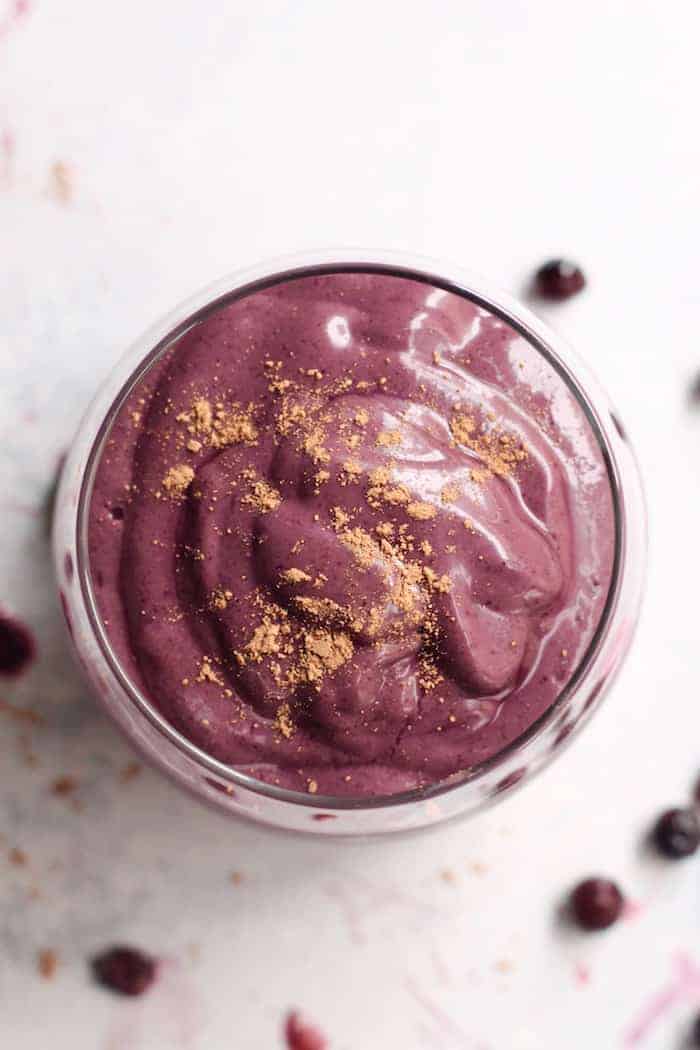 I thought ice would make the smoothie watery (which is like my biggest smoothie fear), but if you don't over-blend it and if you use it in combination with other creamy elements, it actually adds the most gorgeous thickness.

How To Make A Creamy Smoothie

How does one make a creamy smoothie, you ask? Fat. Especially if you’re not using a naturally creamy fruit or veg like frozen banana or zucchini, fat is where it’s at.

Today’s fat of choice is avocado. It adds luscious texture and slight sweetness. It is not optional, that is unless you want to sub a nut butter, which would also be a delight but not as great as avocado.

Another key to dream creaminess is making your smoothie THICK. That means a higher proportion of fruit to liquid and not over-blending since blending generates heat.

To make this smoothie even thicker, you could use more blueberries, frozen spinach (be warned that it’ll change the color!), or frozen cauliflower.

Consider this creamy dreamy Chocolate Blueberry Smoothie the cooler/older/better version of the Blueberry Cacao Power Smoothie I posted back in 2014. And guess what? Your smoothie will be okay if you don't put greens it it. I swear.

Now if you don't have ice on hand and want to make this immediately, which would be very normal, I think frozen spinach would work in place of the ice. Go for the loose kind in the bag, not the kind in the tightly-packed box. 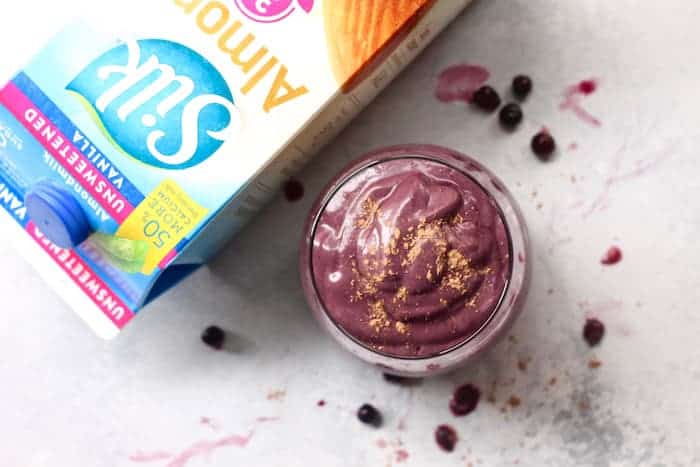 As far as the dates go, I'm a Medjool date girl through and through. Trader Joe's sells them in their refrigerated produce section and Costco sells them in 2-pound boxes for less than $10. Be still my heart!

If they're not soft, you can try soaking them in hot water for a few minutes. If you absolutely can't find dates, you could do a tablespoon of pure maple syrup to sweeten instead. Really ripe banana could work too, but I'm not a big banana in smoothies fan unless it's with peanut butter. 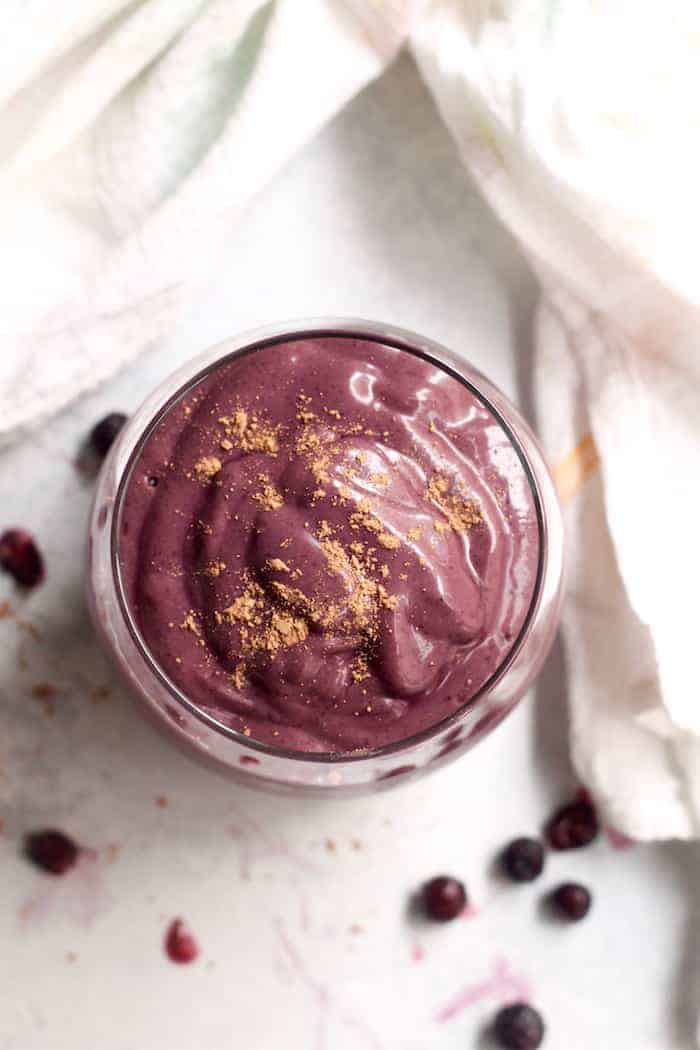 I used my Nutribullet for this recipe and it worked perrrrrrfectly in case you're wondering what kind of blender you need. If you aren't on team super-thick-smoothie, feel free to thin it out with more water or almond milk. S

ilk unsweetened vanilla almond milk has been my go to since my early nut milk days! I first went plant-based back in 2011. It feels like forever ago!

Nowadays I feed my bod what it craves, whether that's a donut or a kale salad or mussels or fried eggs. While I don't restrict what I eat (AKA nothing is off limits or not "allowed,") I do absolutely feel my best when I use dairy-free, plant-based alternatives.

I also just freaking love the taste of Silk's unsweetened vanilla almond milk. Why else would I drink it straight from the carton when Jeff isn's looking?! #TastesLikeBetter to me! 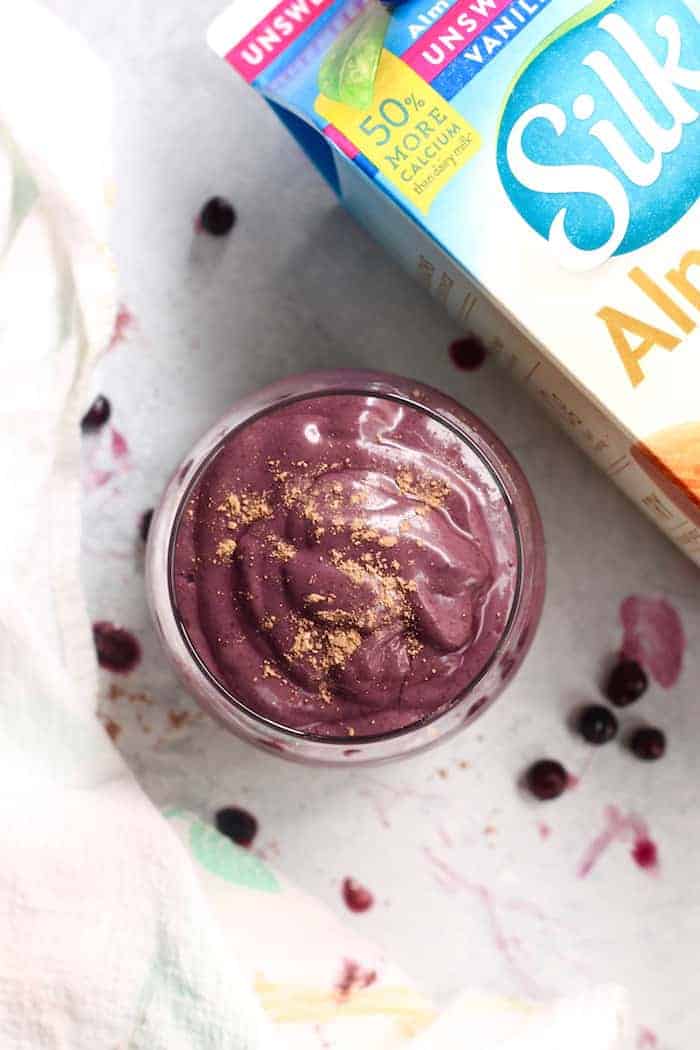 If I could be a smoothie in my next life, I'd be this one. And you'd totally be allowed to eat me with a spoon.

This Creamy Chocolate Blueberry Smoothie is decadent, packed with superfoods, and totally naturally sweetened! With 14g of fiber and nearly 7g of protein, enjoy it for breakfast or as an afternoon snack.

This is a sponsored conversation written by me on behalf of Silk. The opinions and text are all mine.