This Strawberries and Cream Chia Pudding is so creamy and decadent that you'd never believe it's healthy! Completely naturally sweetened, vegan, and gluten-free, it makes the perfect afternoon snack or dessert. 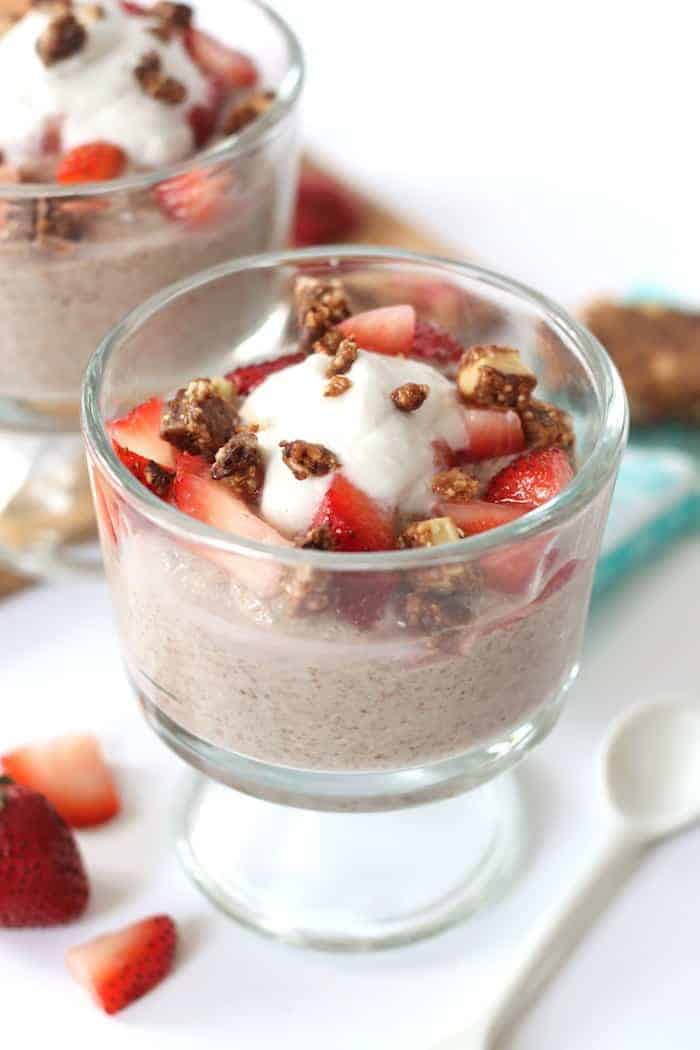 Not with a human. With a food group. A food group called THIS CHIA PUDDING. I've been eating it so frequently that I've deemed it a food group and I think you should, too!

I've decided that blending the chia pudding makes it three and half billion times better. It's a real game changer. You know how some people hate chia pudding because of that tapioca texture? No longer! This version is super creamy and decadent tasting thanks to the blended chia concoction, naturally sweet Medjool dates, and raw cashews. You'd never know you were shoving a boatload of fiber and anti-inflammatory omega-3's into your pie-hole. Nevaaaaaa! 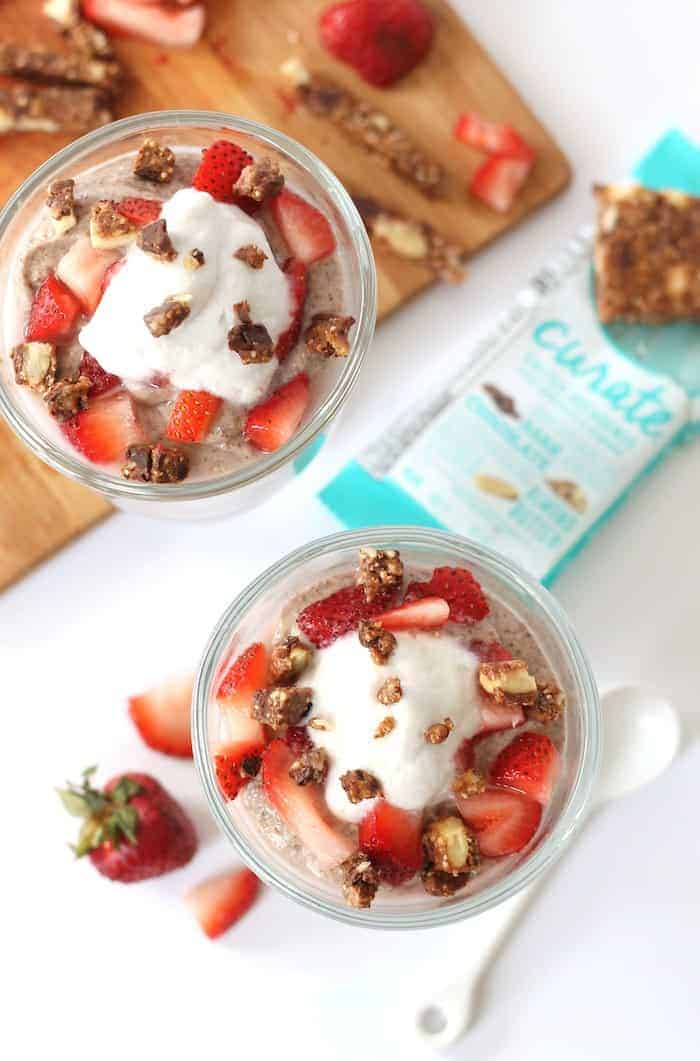 But the toppings...the toppings took it over the top, as toppings should. I've been making coconut whipped cream using canned full fat coconut milk for a while now, but I've never featured it in a recipe. Today is the day!

Aside from fresh coconut whipped cream and juicy strawbs, you probably noticed those chocolatey looking chunks on top, AKA my new favorite afternoon snack bar a la Curate Snacks! 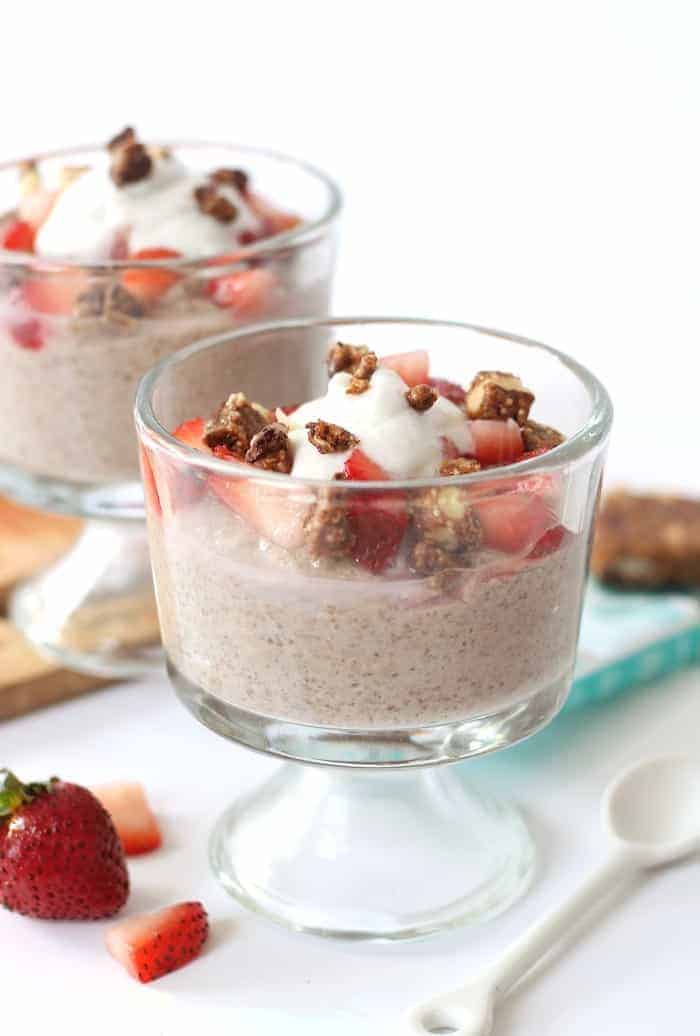 Curate recently came out with a line of whole food snack bars (both adult and kid bars) that put a culinary twist on traditional snacking. They're all totally non-GMO, gluten-free, and have no artificial colors, flavors, or preservatives. The best part is not just that they're a wholesome snack you can trust, but that they seriously taste divine. 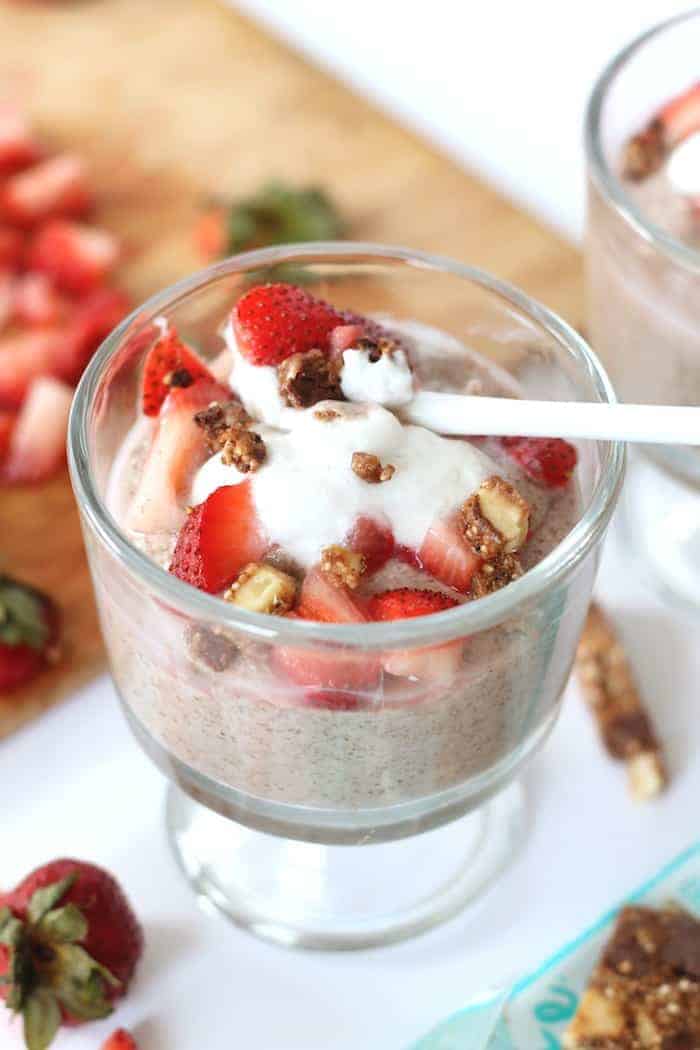 It adds the perfect chocolatey crunch and chew to each bite paired with the cooling coconut whipped cream. Enjoying one of these bad boys as a mid-day snack is one thing, but topping your chia pudding is a whole other level of yumminess.

There are six flavors in the line, but my favorite is obviously the Salted Decadence (Hemp Seeds, Marcona Almonds, Quinoa, Dark Chocolate and Sea Salt) because salt + chocolate is everything. Other tasty flavors include Dark and Tempting Balsamic Fig and Hazelnut), Irresistible Dark Chocolate (Strawberries and Pistachios) Indulgent (Dark Chocolate and Hazelnut), Harmonious Blend (Marcona Almond and Apricot, and Sweet and Tart (Berry Bliss). You can snag these beauties at Target and on Amazon! 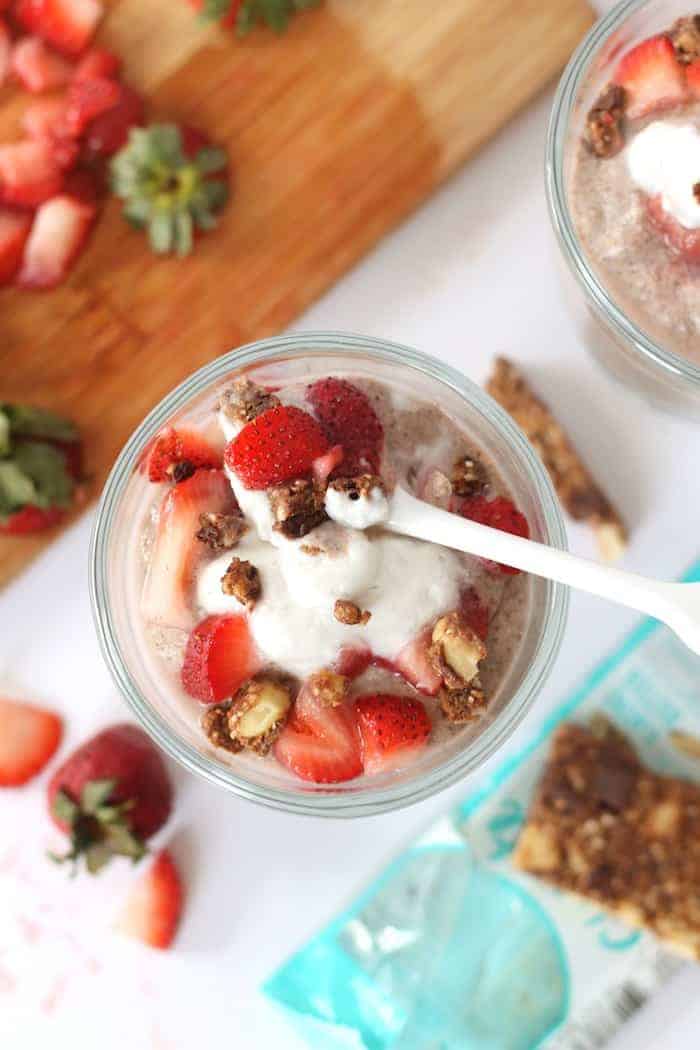 Don't be surprised when (not if) this becomes your new favorite treat. Scrumptious is a vast understatement!

This Strawberries and Cream Chia Pudding is so creamy and decadent that you'd never believe it's healthy! Completely naturally sweetened, vegan, and gluten-free, it makes the perfect afternoon snack or dessert.

For the chia pudding:

For the coconut whipped cream: