Bright and flavorful Lemon Coconut No-Bake Bites packed with fiber and protein for a filling snack. Made with coconut flour and naturally sweetened! 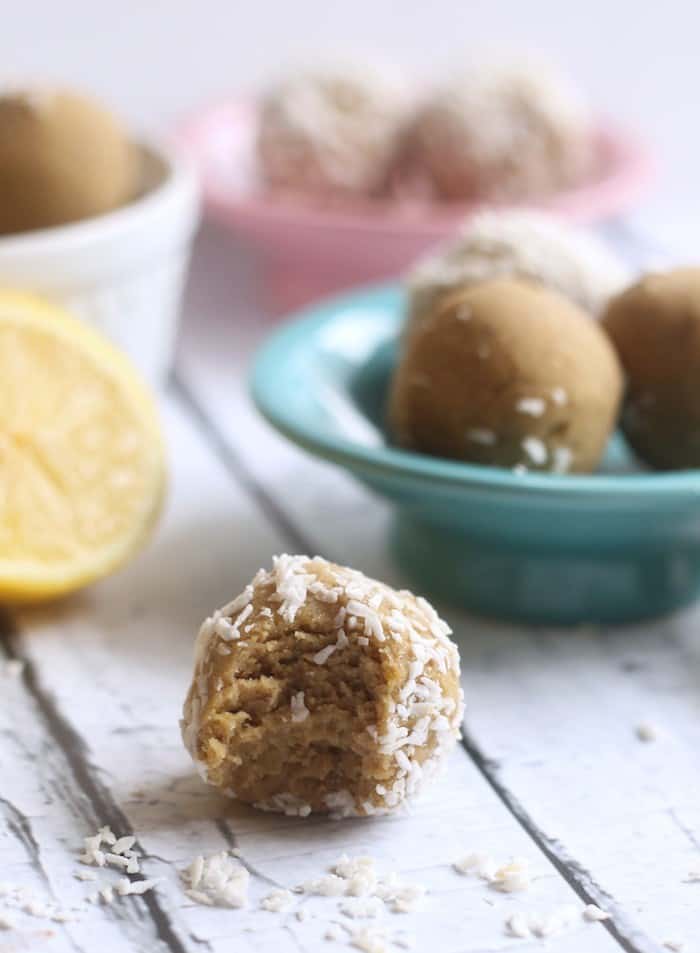 These were the best-tasting accident I've ever laid mouth on.

When I make a recipe for the blog that uses a lemon, it means I have to buy an entire bag of lemons considering I'll need about three for the photo shoot alone.

Same thing goes for any recipe that uses fruit. It's all about the colorful peaches and cherries and bloobs in the background striking a pose.

So naturally I had a crisper drawer full of lemons (among a million other fruits) leftover from an upcoming lemonade post that I had absolutely no idea what to do with. Since I like having snackities around that satisfy my sweet tooth without being packed with added sugar, I decided to get my lemon no-bake bite experiment on.

Stocking up on this Vega Vanilla Protein + Greens when Whole Foods had a crazy protein powder sale didn't hurt the need for no-bake bites, either. 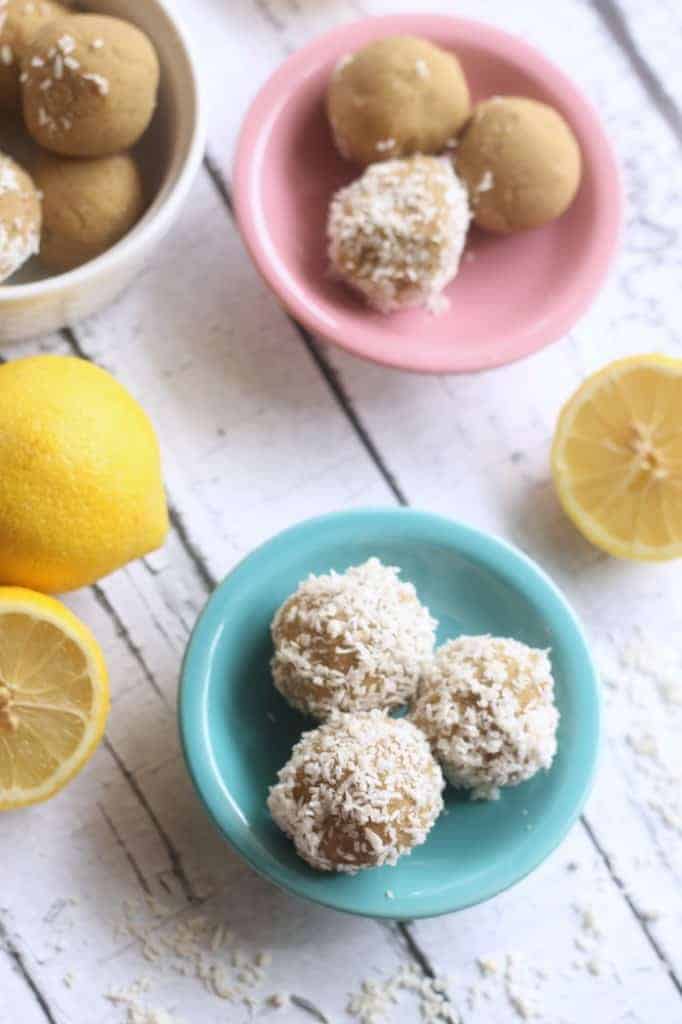 And then came the coconut flour. Ohhhhh the trendy heavenosity that is coconut flour. I grabbed a bag a couple weeks ago at the nation's capital of food trends, Trader Joe's.

I swear, the second a food goes viral you can count on Trader Joe's making their own version. Hemp seeds. Kale chips. Chia seeds. Riced cauliflower. Cashew meal. Quinoa pasta. The list goes on and on!

If coconut flour intimidates you, don't let it. Since it's literally just super ground up coconut, using it in recipes in place of traditional flour adds boatloads of fiber (and a bit of plant-powered protein, too) without all the carbohydrates of traditional wheat flour.

It's also lower in fat than nut flour like almond meal.  Did I mention it costs about three dollars? 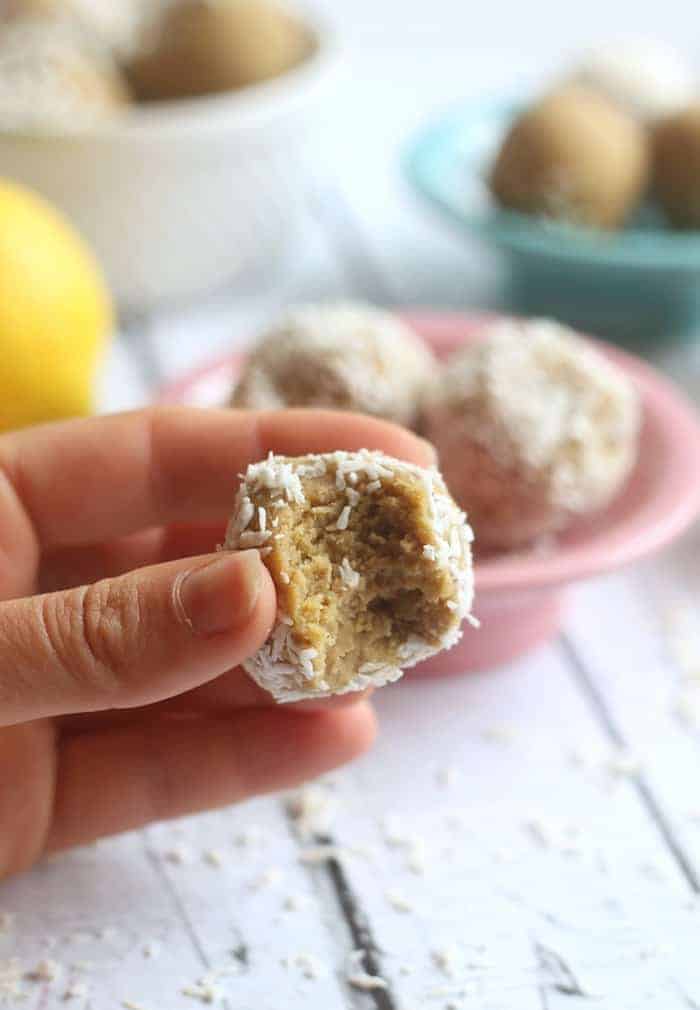 Wondering the nutrition stats for these bad boys? Well it depends what protein powder you use (this one and this one are my faves), but each bite has around 80 calories, 1 gram of fat, 4 grams of fiber, and 3 grams of protein. STELLAR, if I do say so myself.

Now that you're all hot and bothered about coconut flour, you'll find yourself wanting to use it in muffins and cookies and two-minute raspberry mug-cakes galore.

But be weary!! This stuff soaks up liquid like a sponge, so you'll need to use more eggs and liquid than you're used to. It's most definitely not a cup for cup substitute for traditional flour. 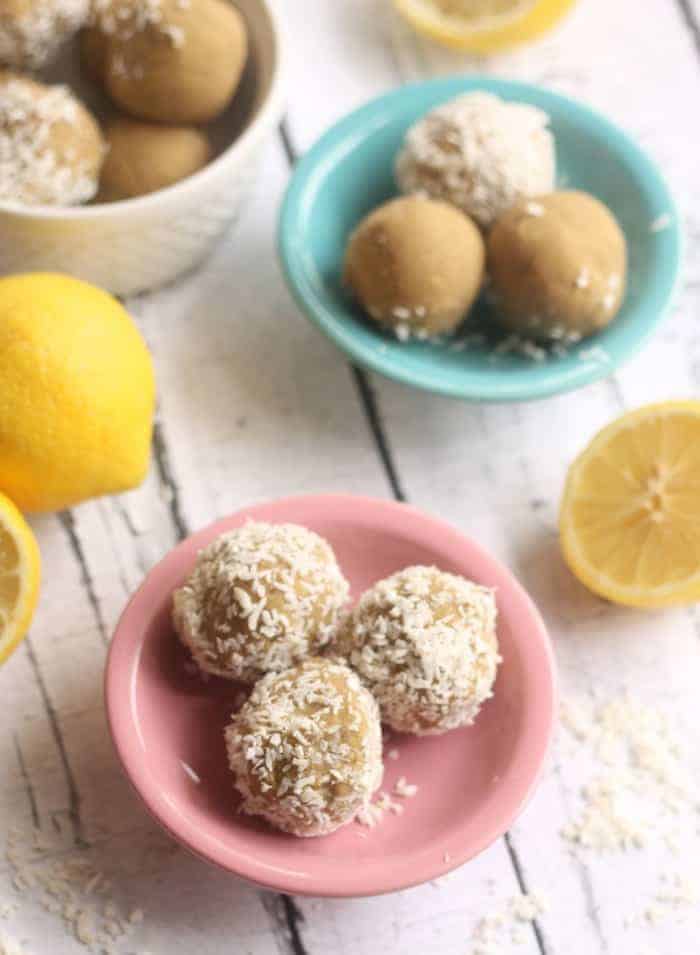 Don't believe me? My roommate tried one and screamed "HOLY SHINTO" and then said "mmmmm" so many times in a row that I thought something was wrong with her. She then proceeded to tell me that she can't make them because she'd eat the whole batch in one sitting.

I guess you'll just have to go make them and get back to me.

Bright and flavorful Lemon Coconut No-Bake Bites packed with fiber and protein for a filling and tasty snack. Made with coconut flour and naturally sweetened!

*This recipe was specifically formulated with coconut flour and will not work with another flour. Try these Matcha Energy Bites for a version using other flours!