Glucose. Corn Syrup. Stalin. Voldemort. Sugar is the pleasurable poison that will surely lead to the demise of the human race. 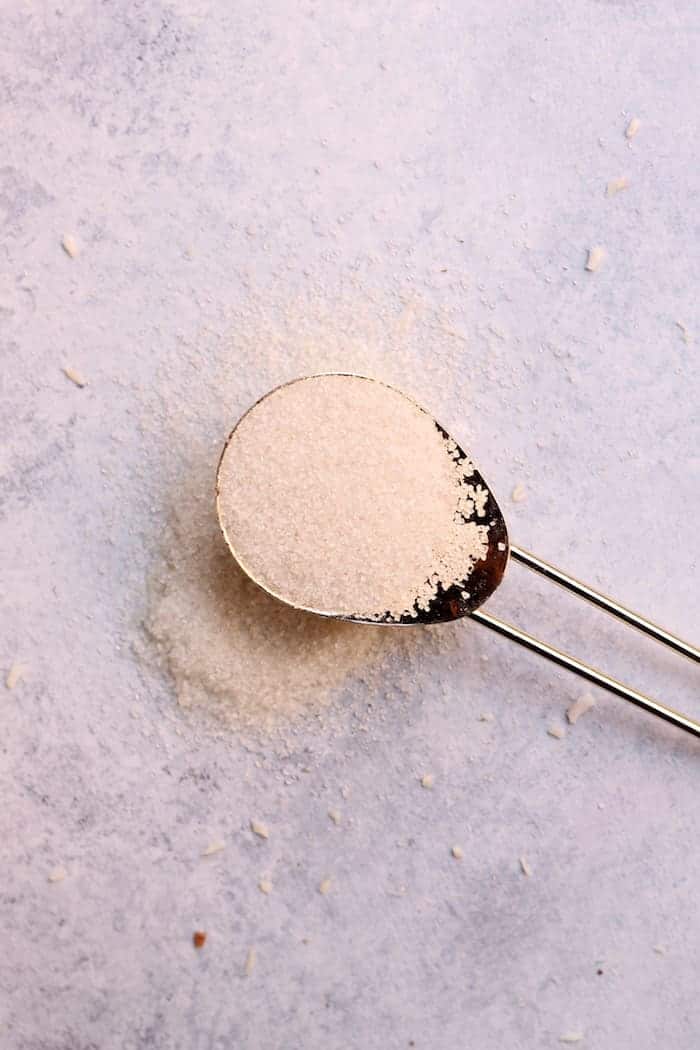 Sugar isn't kale. It's never going to be the next big superfood. But the media and society overall have a way of sucking the fun out of so many pleasurable foods. While sugar clearly isn't inherently "healthy," (what does that word even mean anymore?) it's our relationship with sugar that causes the real problems to arise. Trust me, it's far more unhealthy for your mind and body to have near panic attacks every time you're around sugar than if you were to just eat the damn brownie.

We tend to restrict sugar or cut it out completely because we've been told to. Scrolling through Facebook will have you believing you might as well smoke a cigarette before eating anything with high fructose corn syrup. Or better yet...a brownie made with GLUTEN (insert mortified emoji here). The fear mongering has reached another level of ridiculousness. Eating pretty much anything has become such an anomaly that we can barely listen to our own bodies anymore.

The problem is that most of us eat based on the time of day and based on what we think we should eat rather than when and what our bodies actually want. In fact, many of us haven't eaten intuitively since we were toddlers because guess what? Toddlers don't have Facebook and Dr. Oz and Grain Brain.

All they have is their little minds and bellies telling them when they've had enough to eat. They're ok leaving food on their plate because they know they'll eat again. Eating isn't some humongous deal. Doesn't that sound so blissfully wonderful? 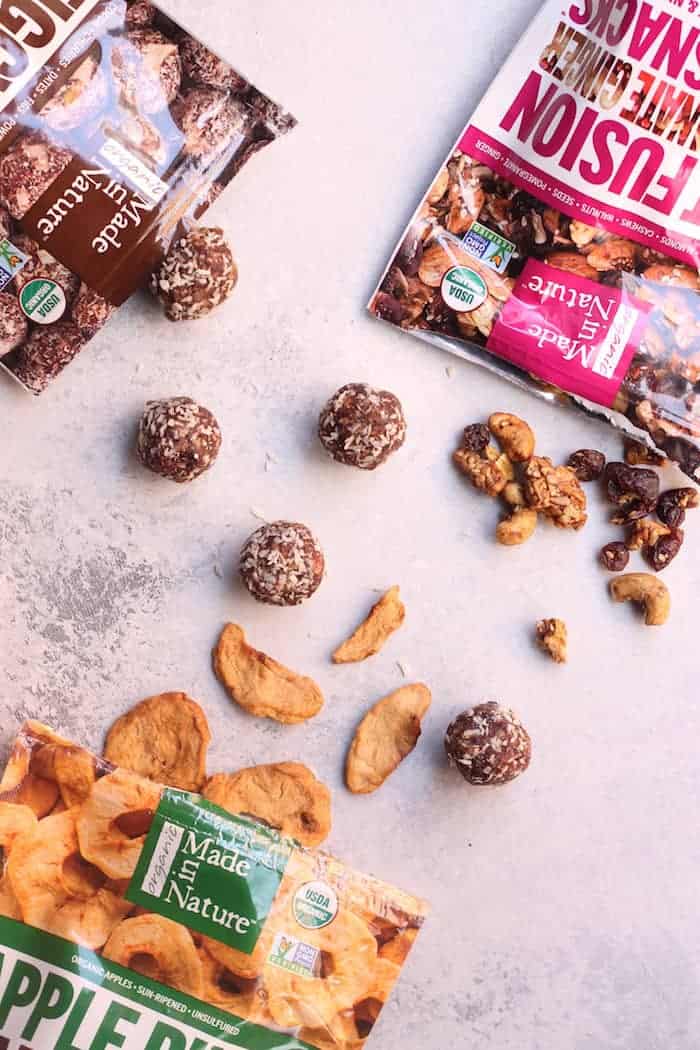 As we grow up, we're warped to base our eating decisions on everything except our own intuition. To fall back in love with food again, we have to basically relearn our basic instincts. There will always be people telling us to abstain from certain foods. At some point you have to throw your hands in the air and recognize no one will ever know your body like you do.

Restricting foods that your body craves will lead to over-eating. Deprivation 101. It's proven by science. You restrict restrict restrict, then you go to a party where there's birthday cake and you eat thirty-seven pieces because you've been denying yourself for so long. If you allow yourself to feed your body what it wants when it wants, you realize your body actually won't want you to eat ice cream all day every day.

You can actually have a serving and move on with your life. You know when your little brother only wanted to play with the toy car when you were playing with it or when he couldn't have it? Or the friend who had super strict parents in high school and rebelled like crazy in college? Same exact phenomenon. Your brain is smart. It will always want to break the rules. You will always want what you can't have. So stop giving yourself rules.

Healthy people eat sugar. They allow their bodies to fully enjoy the pleasurable sensation physically and mentally from eating a warm cookie or delish bowl of ice cream and then they move on. They don't beat themselves up over it and they don't buy zero-calorie cookies made with fake sugar thinking they're going to fool their brain.

When indulging here and there becomes less of a big deal, when you realize you can have sugar when you want it, it loses its celebrity status. It just becomes normal. (Reading the book Intuitive Eating has opened my eyes so, so much to everything I talked about above and more. I highly advise you read it!) 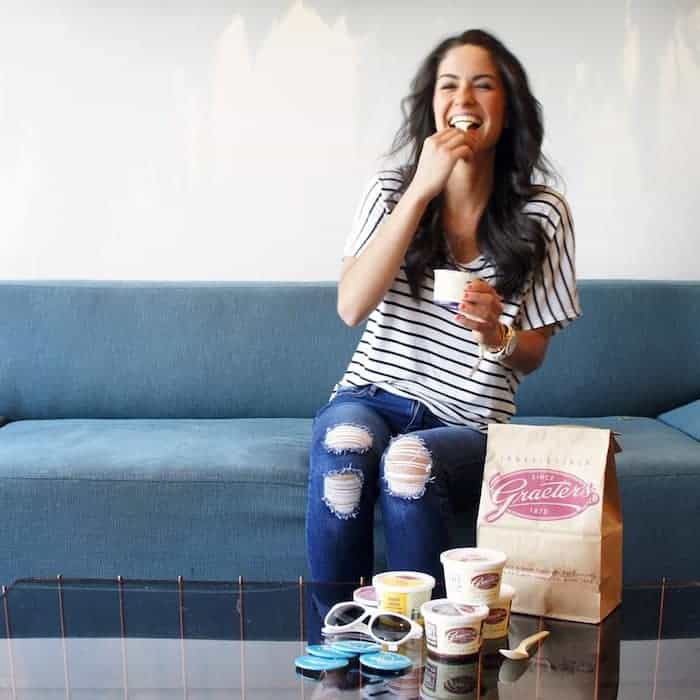 I eat sugar every day. It's freaking delicious and my life would be so much less sweet without it. Oftentimes it's natural sugar in nourishing foods I love like apples (fresh and especially these dried ones), dates, mango, etc. Other times it's in baked treats like muffins or cookies or maple syrup on my pancakes.

And sometimes it's in the form of refined white sugar when we grab donuts on the weekends. Lookie here, I've lived to tell ya about it! It's not because I'm young or because I have some weird fast metabolism (people love to go there with me). I fuel myself with nourishing and happy foods, I don't deny my body what it wants, and I move my body healthfully and happily. It all boils down to the same thing---your relationship with food.

I'm totally on board with keeping an eye on added sugar. I look for about seven or less grams in items like cereal and pasta sauce. I'm conscious, but I'm not obsessed. I'm observant, but I'm not rigid. I don't put an item back on the shelf when I see sugar in some form. I don't deny myself dessert when I'm craving it out of fear of sugar.

Do I eat dessert every time I go out to eat? No. But because I don't romanticize sugar nor restrict it and because I've learned to listen to my hunger and fullness cues, getting dessert is kind of just like getting a certain kind of entrée. I get what sounds good and I move on.

The people who get into trouble with sugar are the ones that are in a negative relationship with it because of the diet mentality. They may turn to sugar to soothe sooth an emotional issue when they're not in fact hungry. They may never allow themselves to eat donuts and then go to the store in the middle night and binge eat a dozen.

They may eat "skinny" frozen yogurt their whole lives and then top off a gallon of ice cream in ten minutes. It's not sugar that's the culprit. It's over-using it because of something deeper going on inside you. 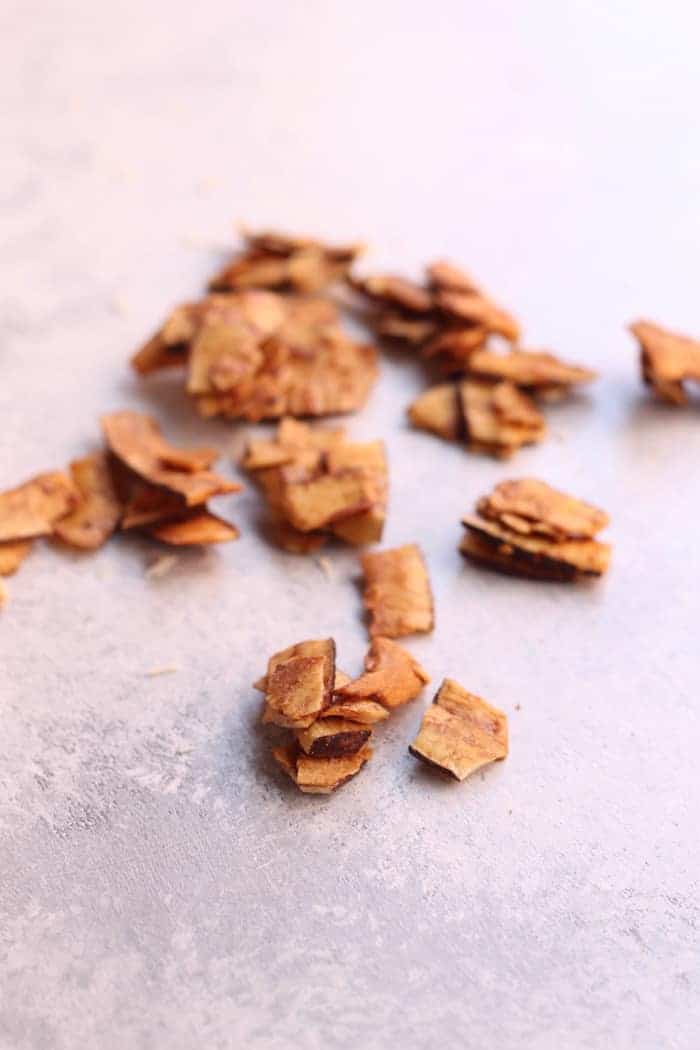 The promise land is getting to the point where sugar is in balance through fully embodying an intuitive relationship with yourself and with sugar. Huge thanks to Jamie Mendell for her wisdom on this topic! You should totally watch her video.

Nowadays, people fear natural sugar like they fear the industrial fructose in a Snickers bars even though natural sugar is wrapped up in a beautiful package with fiber and protein and phytonutrients that all work synergistically to blunt the spike in blood sugar.  We shall not fear the fruit! Apples were not made in a lab next to Pop Tarts. Nature knows what it's doing.

I fell in love with Made in Nature snacks once my Costco obsession began about six months ago. What I love about this company is that they offer insanely delish and wholesome snacks perfect for on-the-go. While most of their snacks are naturally sweetened with organic fruit, they'll also use pure maple syrup in products like Italian Espresso Coconut Chips (oh my god) and Pomegranate Ginger Nut Fusion (my favorite of all their snacks). While there's plenty of occasions that warrant good old sugar, I do lean toward natural choices when I can.

Sweeteners like maple syrup, coconut sugar, and honey are less refined and therefore retain some of the original mineral content. When I cook and bake at home, I usually (not always) opt for those sweeteners. It's companies like Made in Nature that make that possible in the snack world. Oh and promise me you'll try Rosemary Truffle Kale Chips!! You'll never be the same. 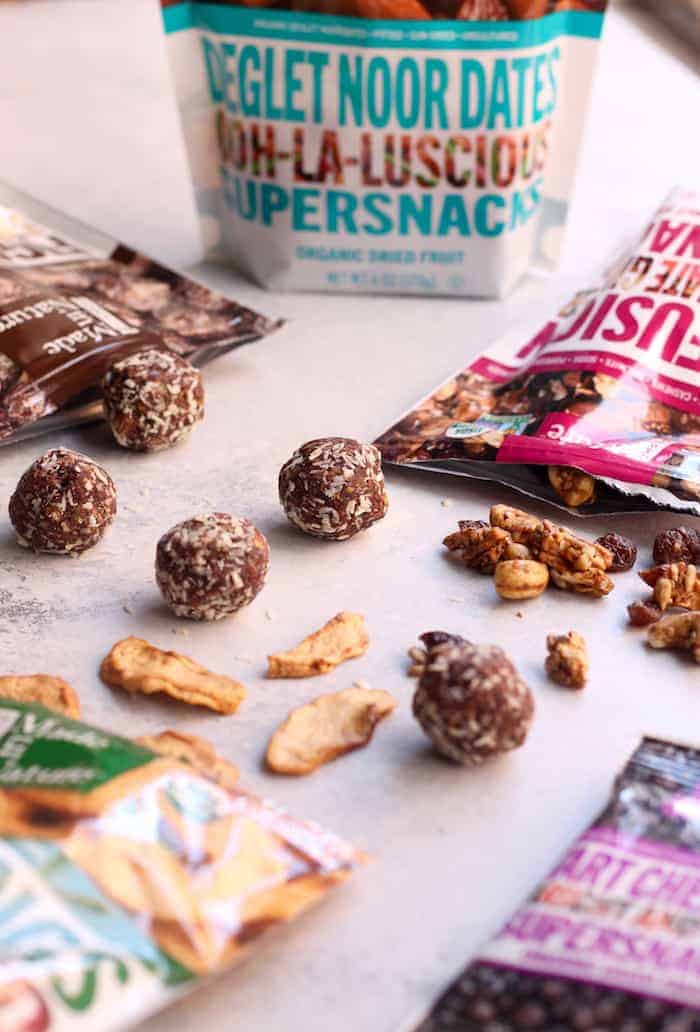 And guess what? The people who drank the sugary beverage with added fruit had a lower insulin spike compared to the sugary drink on its own. How about this study where consumption of freeze-dried mango by obese individuals did not negatively impact body weight but had a positive effect on fasting blood glucose? Or that dates, a low glycemic fruit, are considered a healthy addition to a type-2 diabetics diet? Or that eating six dates a day can help pregnant women have easier deliveries? Fruit does not equal sugar.

Be wary of the media. Please. Remember the times when women couldn't vote? When everyone thought the world was flat? When people had slaves, for crying out loud? There will always be false truths floating around society and it's your job to exercise a healthy skepticism. To think independently.

A fact is not true because a bunch of people say it is. Crazier things have happened than the media telling us everything we put into our bodies except organic local watercress and grass-fed elk is toxic.

Be sure to check out my friend Anne's post on What Causes Sugar Cravings, too! 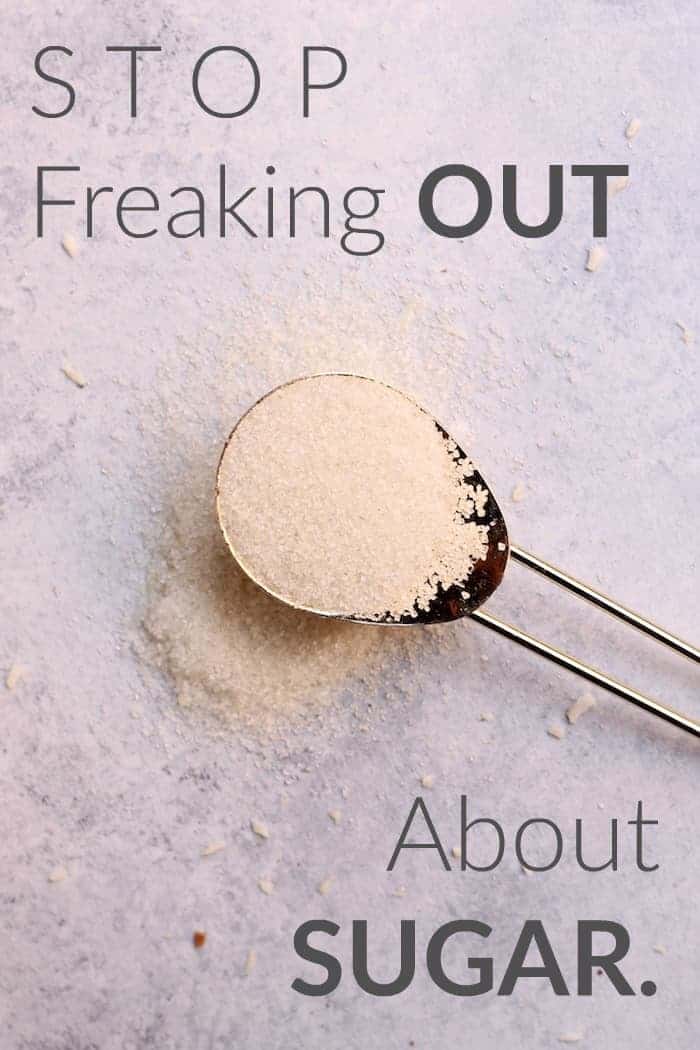 This post was made in partnership with Made in Nature.