Hummusapien » Lifestyle » Travel » Eating All the Food in Europe: Part I

I've been eating everything in sight. Literally. Europe was dreamy. As you know, I scheduled a few posts before I left so you wouldn't all have up and left me by the time I returned, but it has been a helluva weird experience not blogging and communicating with you all through social media on a daily (lezbehonest, more like hourly) basis. It's a bit sad not waking up to my best friends, endless croissants and breathtaking views, but I must say that I'm happy to be home! 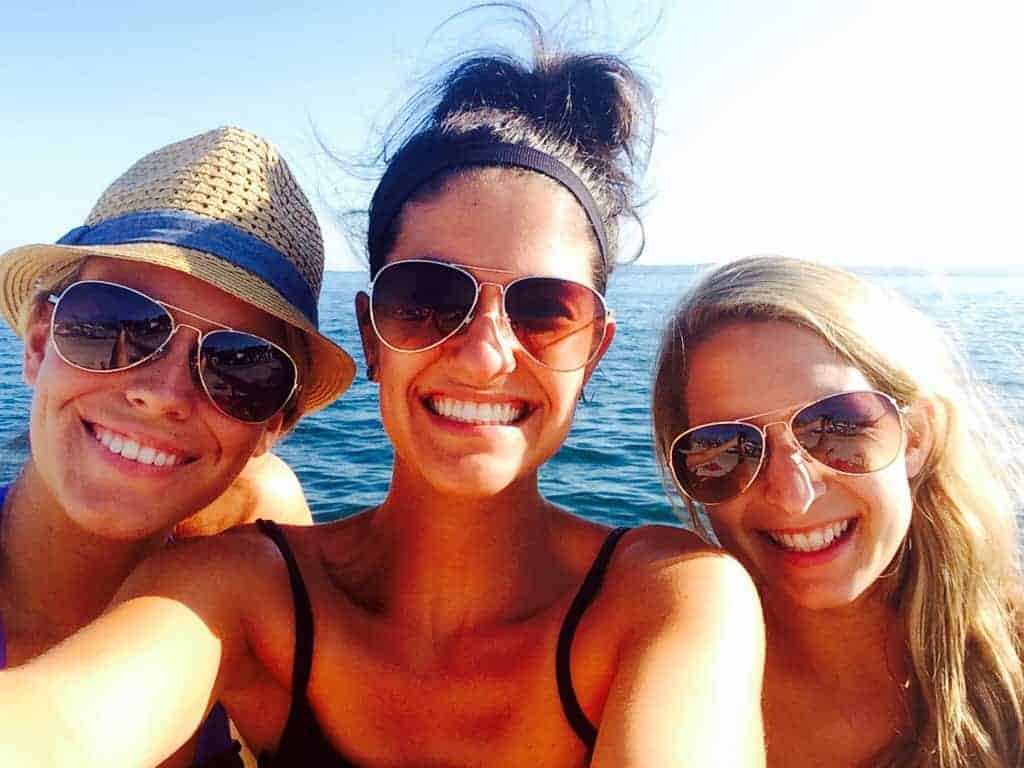 Our trip destinations included Paris, Croatia, Cinque Terre (Italy) and Rome, Barcelona, Porto (Portugal) and Dublin.  Six countries in seventeen days probably sounds like a lot, but it was the perfect balance of bustling cities and quaint towns. I don't know if I'll ever have the opportunity to travel to Europe again, so I was really glad to have been able to see so many different places in a short amount of time. So let me start off by saying that the food was pretty much amazing everywhere.  I ate basically anything and everything I wanted, which consisted of some kind of pizza, pasta, bread or cheese 99% of the time. Even in Croatia where we weren't sure what the food would be like, it was largely Italian. It's funny because I rarely eat pasta at home--not because of carbs or anything, but just because I prefer Mediterranean, Mexican or Indian food to Italian. But the pasta there was nothing short of exceptional; and you all know how much I love me a slice of pizza pie! Bring it on. 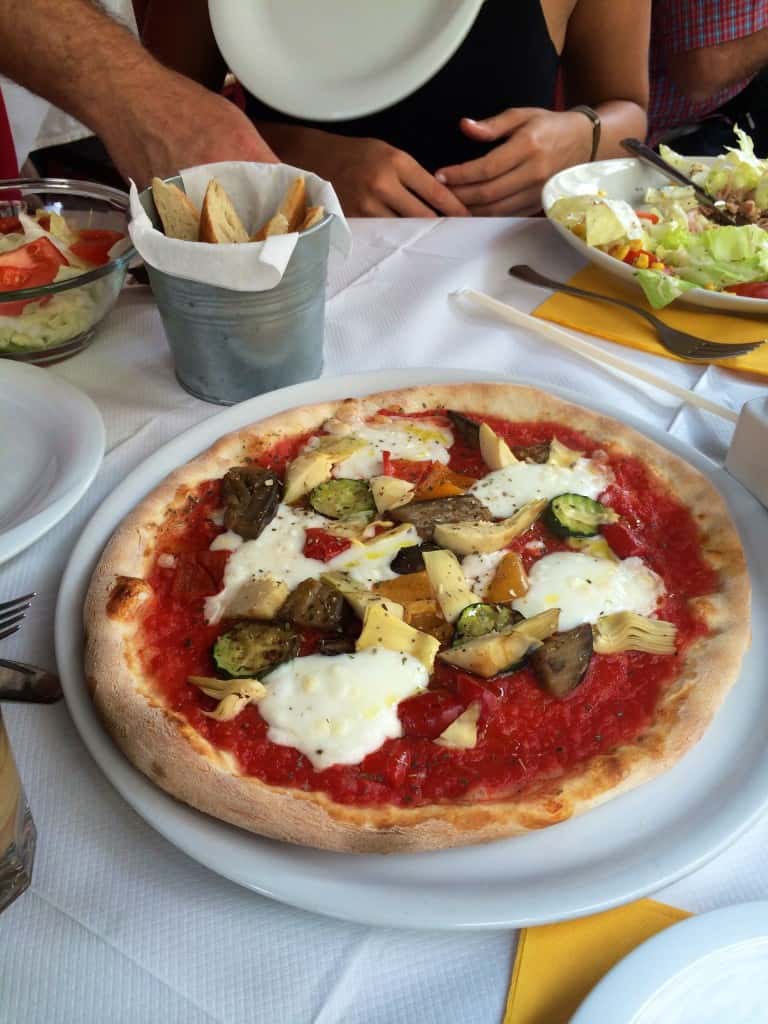 I normally eat tons of fiber each day from all the smoothies, fruits, nuts, veggies, whole grains and legumes that are staples in my diet. I don't eat white flour and cheese super often, but that's pretty much all I ate in Europe--no complaints! When in Rome, right? While in Europe, our day was usually something bready for breakfast (think croissants or a smoked salmon sandwich), some kind of pasta or pizza with a salad for lunch, a cappuccino and maybe a treat for a snack, and maybe some seafood or more bready things for dinner. I ate WAY fewer veggies simply because there aren't tons of veggie-centered meals here. I also eat nuts, seeds, avocado and nut butter daily at home but I barely any while I was there! Super weird. I definitely drank my weight in olive oil though, so no worries. I couldn't wait to faceplant into a gigantic chocolate blueberry green smoothie when I got home! I actually made one twenty minutes after I got home from the airport. 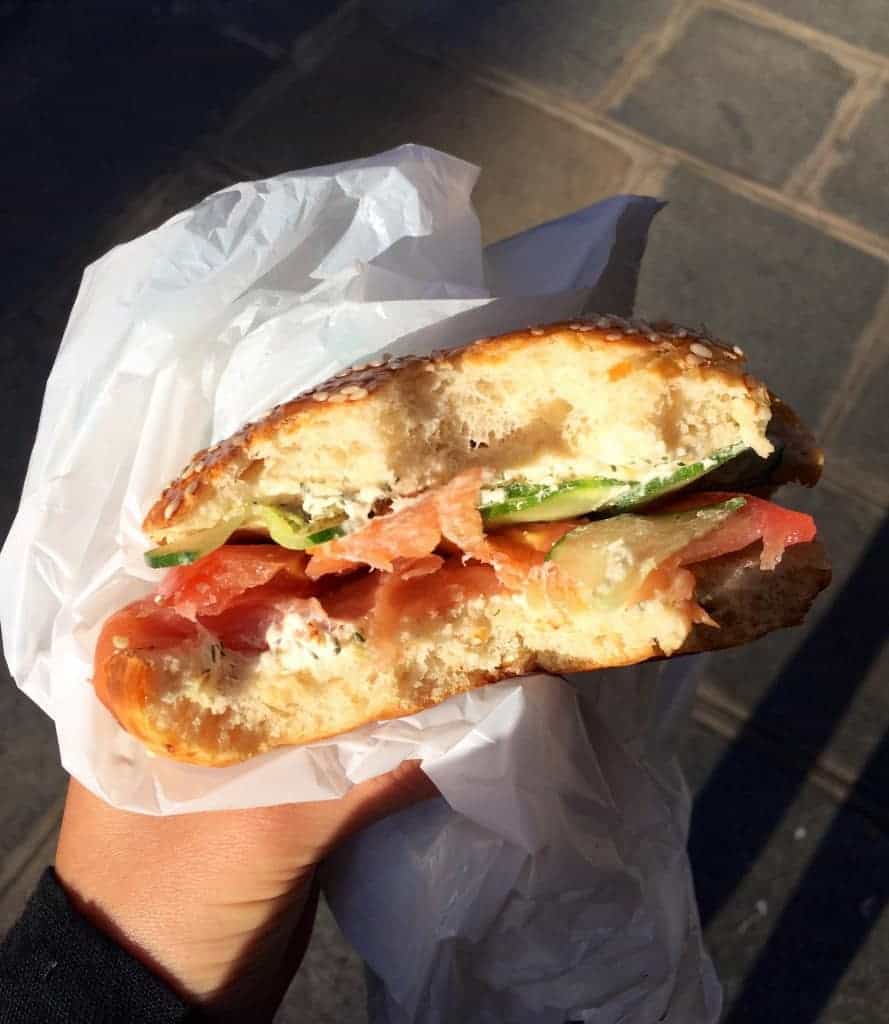 There was amazing seafood everywhere and I love fish of all kinds, so I definitely took advantage of that. I enjoyed everything from smoked salmon and octopus to mussels, grouper, squid, clams and shrimp. It was weird because at home, I'd go weeks at a time without eating seafood. I don't normally prepare it at home and it's not always fresh at restaurants; but in Europe when I was overlooking the ocean, the seafood was really just incredible. 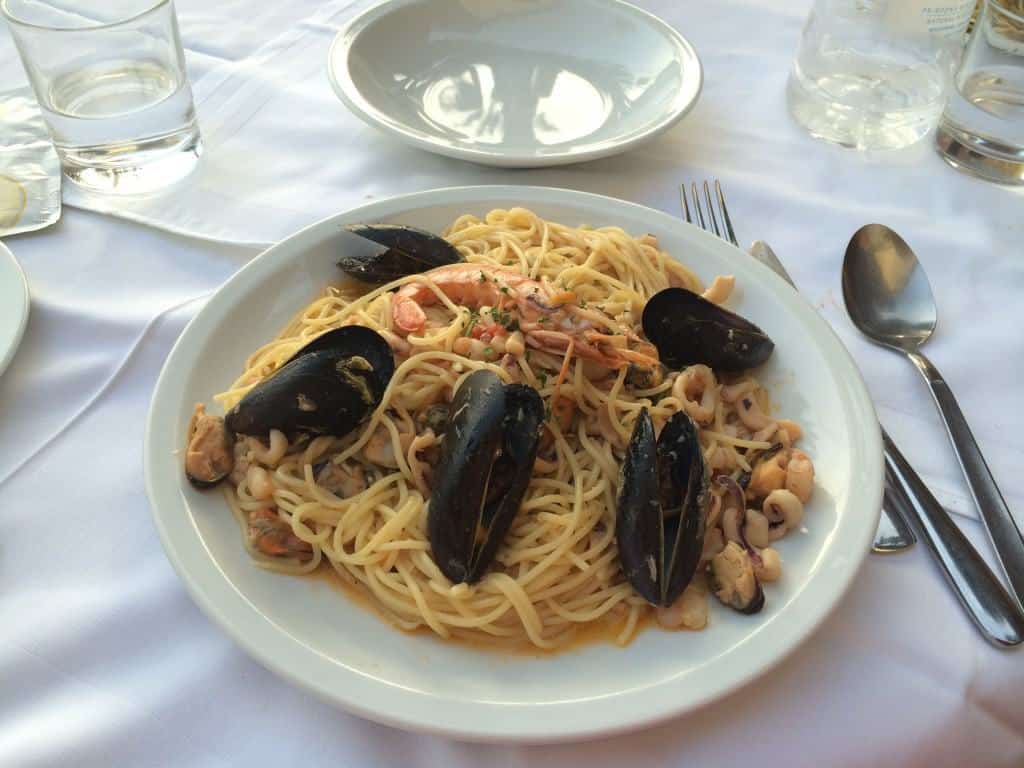 Everything is beyond fresh there. Genetically modified foods are illegal in Europe, so it's incredible to see lemons the size of my face growing on a tree and just knowing that that's how they grow. My friend Carrie ate sour patch kids candy on the train and it was colored with vegetable extracts instead of the artificial colors we use...I died. I mean I'm in love! There were little markets on the streets pretty much everywhere. I would often grab a nectarine or some cherries to snack on throughout the day. I really didn't pack much in terms of snacks because a) I barely had enough room for shampoo let alone healthy snacks and b) this was probably the only opportunity I'll ever have to be Europe, so I was fully ready to eat baguettes all day and not think twice about it. We had espressos or cappuccinos pretty much every day and they're incredible. One time we paired one with a frozen cannoli and it was epic. We also had a bottle of wine every night with dinner, obviously. We were living it up and feeding our souls. I decided that I wholeheartedly want to eat my way through every country on this planet. Truth. 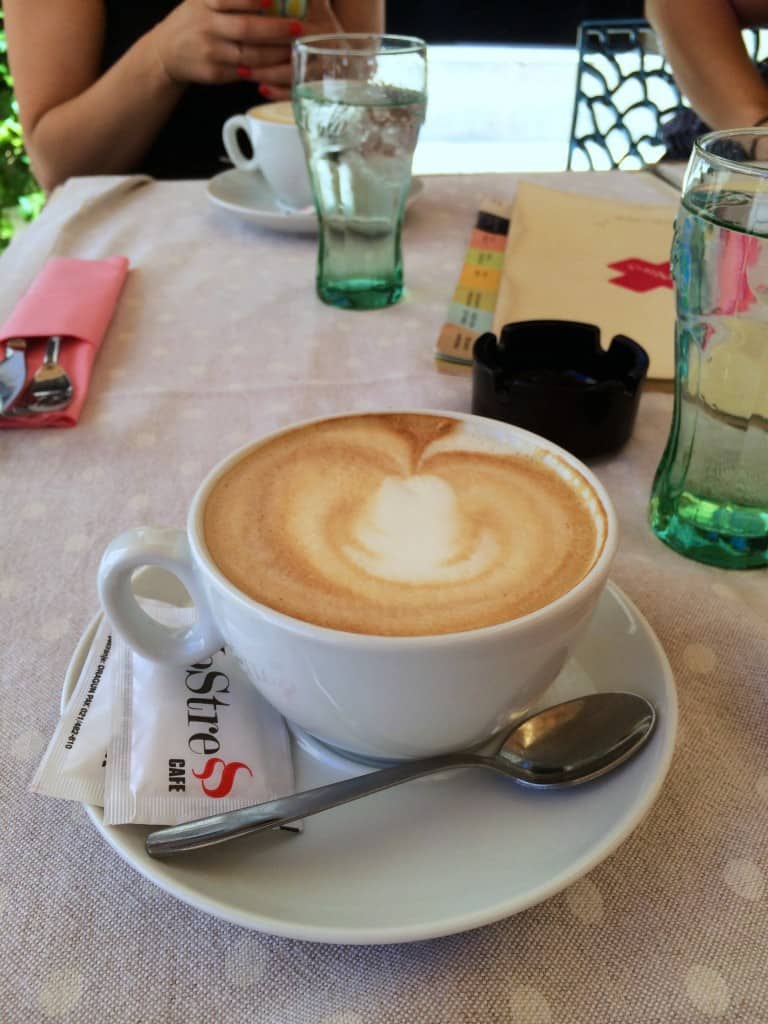 Our first stop was Paris (and only for a day), where I had one of my favorite meals--a vegetarian tartine with zucchini, peppers, tomato, fresh herbs, pesto and mozzarella with grilled veggies on the side. Beyond amazing! I also had a super scrumptious smoked salmon sandwich with this dill cream cheese at a little shop before we went to the airport. They weren't super friendly in Paris and it was a tad smelly, but still totally great. Did I mention that everyone smokes cigarettes in Europe? That was a huge adjustment! 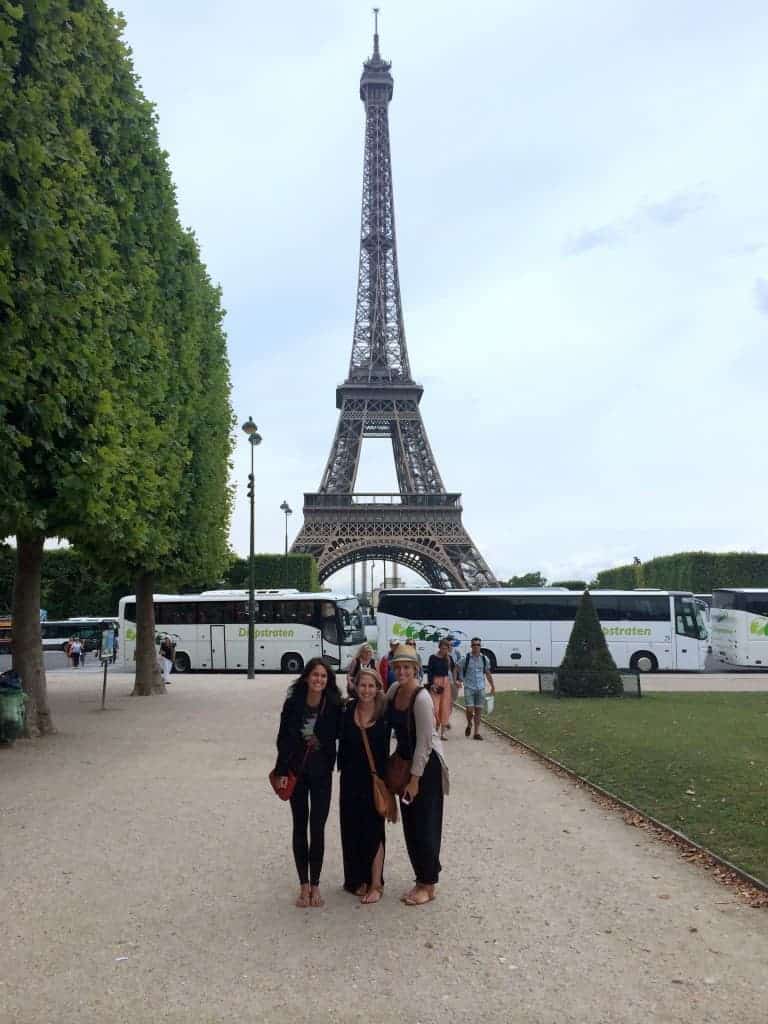 Every little cafe was unique and delicious, which was so fun. You just couldn't go wrong! It's like wherever you went, you knew it would be good. 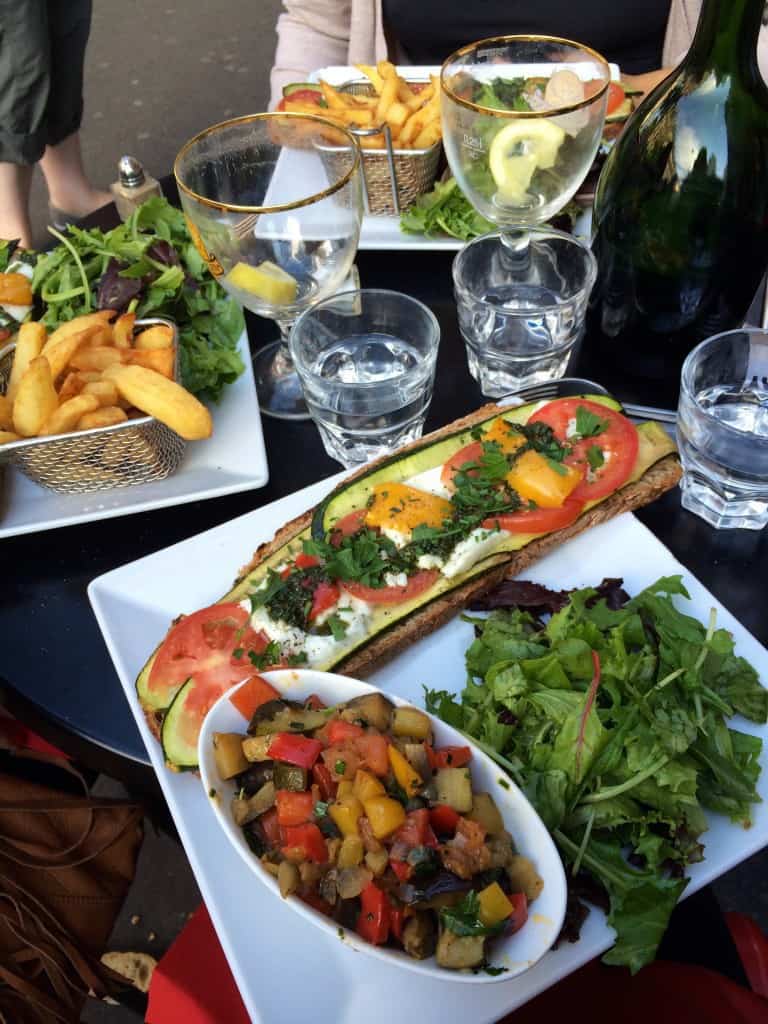 Next was Croatia (Split and Havar), which was just beyond beautiful. There were fabulous beaches and adorable little towns with shops scattered everywhere. The food was incredible, mostly Italian with Mediterranean influences. There were amazing markets with hands down the best nectarines I've ever had. I also had fabulous pistachio gelato in Split! There wasn't ice cream anywhere--just gelato. 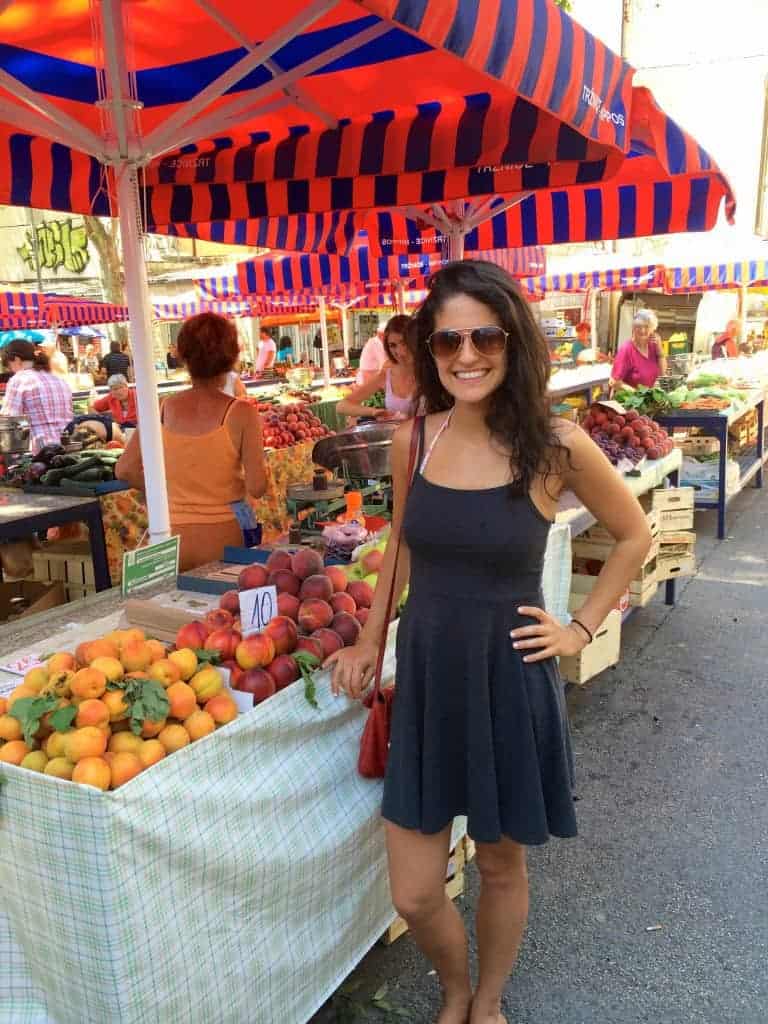 Right when we got there, we had yummy pizza and Greek salad on the beach complete with the best feta I've ever had. Died. For dinner, we had a delish creamy pasta dish with salmon and prawns along with mushroom risotto. It was rich and heavy and divine. 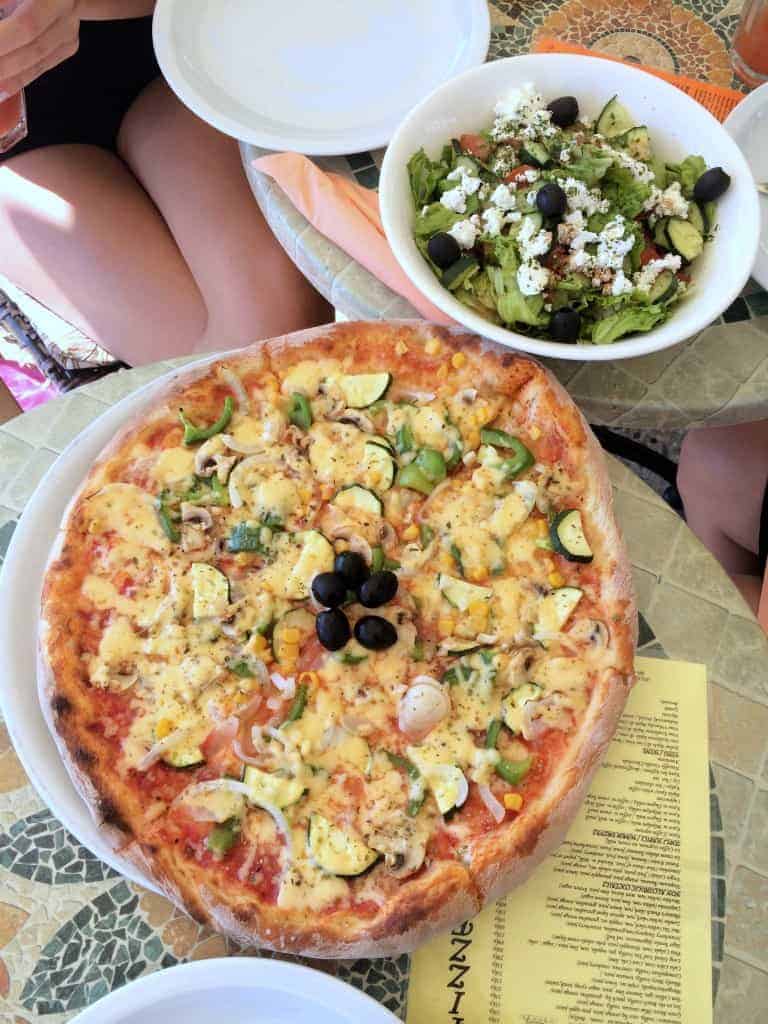 Other highlights included a fabulous veggie omelet with homemade walnut flax bread at a little breakfast nook called No Stress Cafe. We also had an incredible meal of tuna steaks and cabbage slaw on our boat ride in Havar. Tuna is on every menu here and it's so flavorful! After the boat ride to the caves, we found these fantastic homemade mini donuts with coconut and chocolate--yummmm! 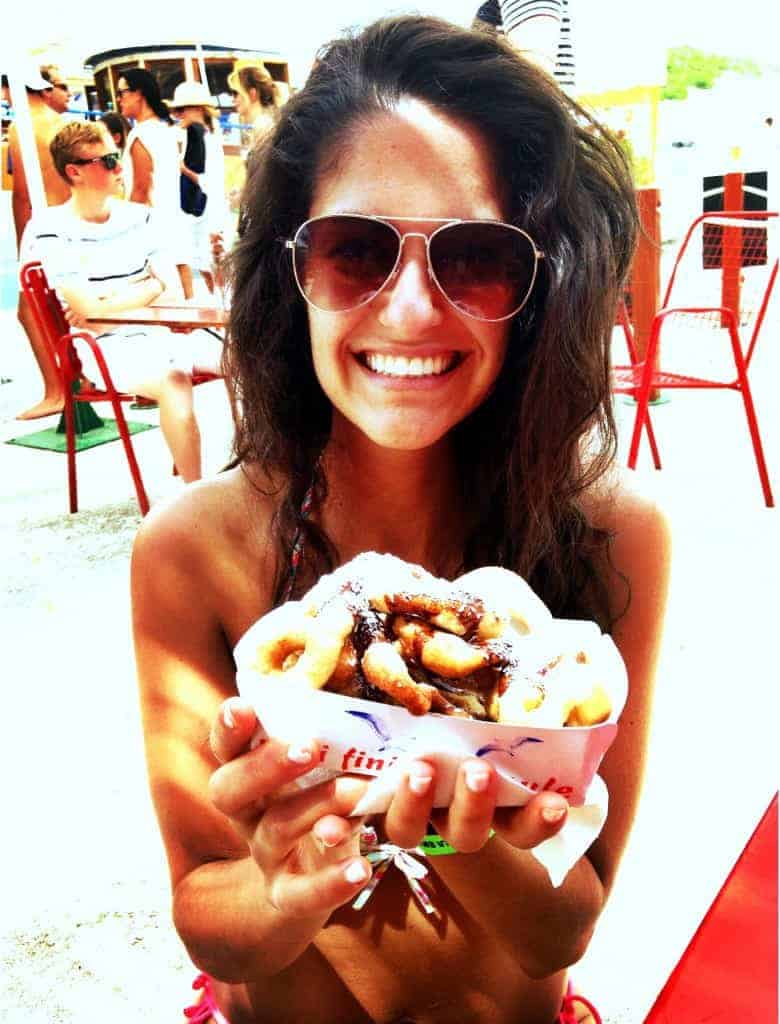 Everything is so slow in Europe and meals are quite a lengthy experience, which I don't hate one bit. Keep the bread and wine coming! 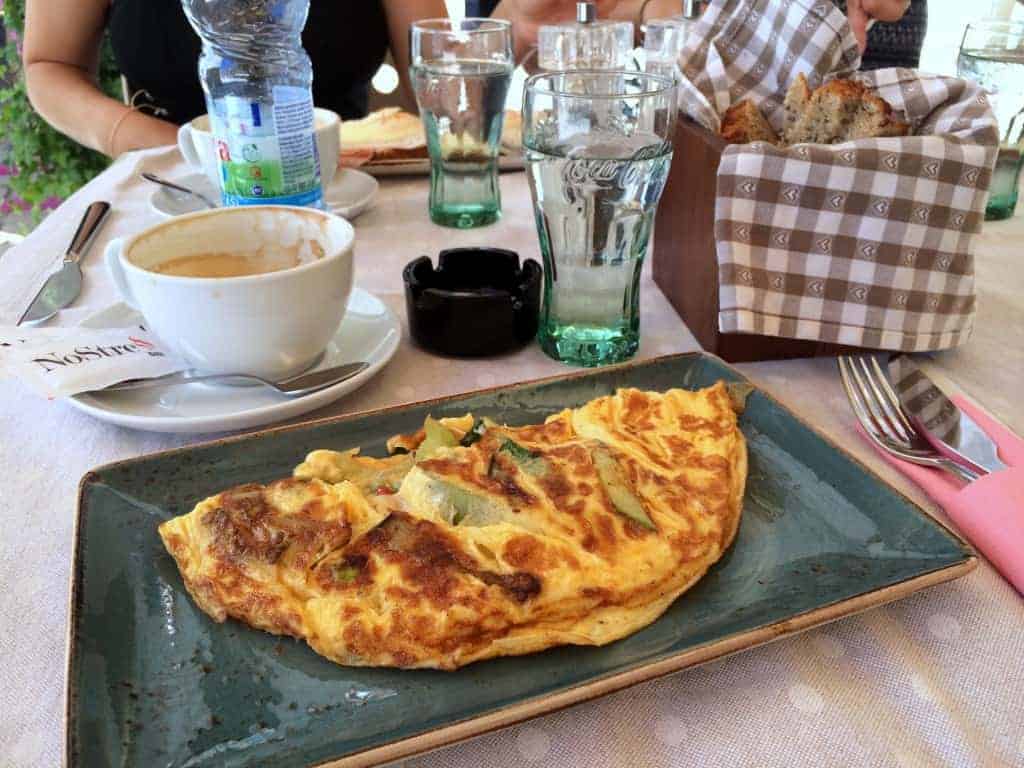 How about a couple pics to highlight Croatia's BEAUTY?! 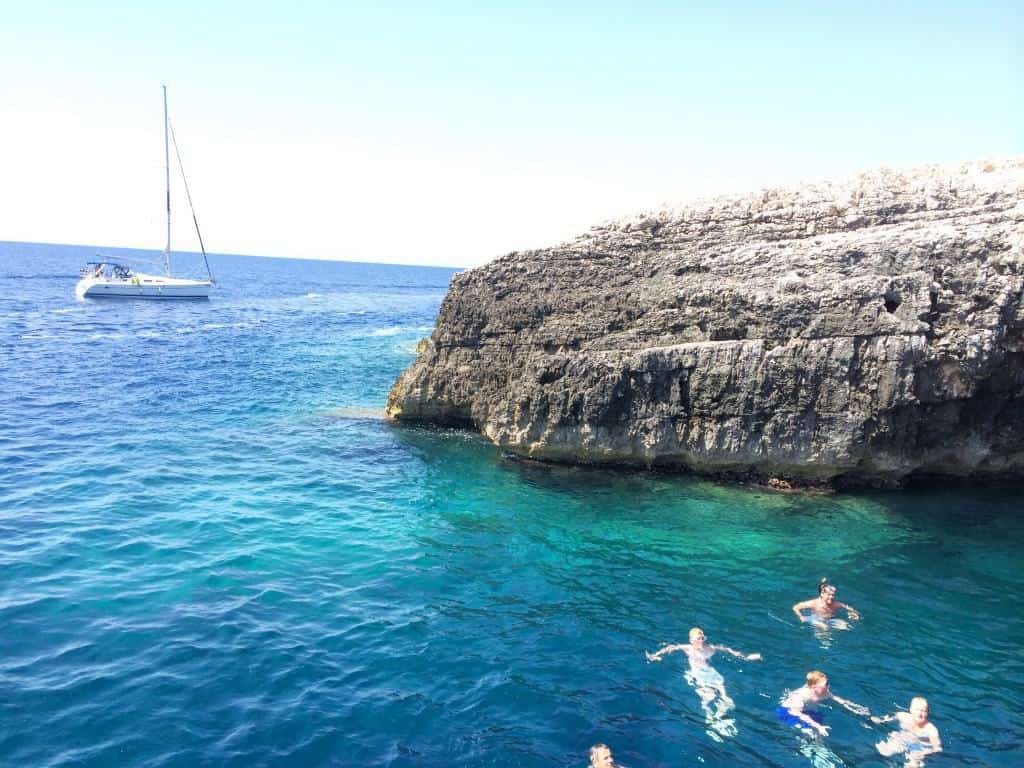 We died for these purple flowers! 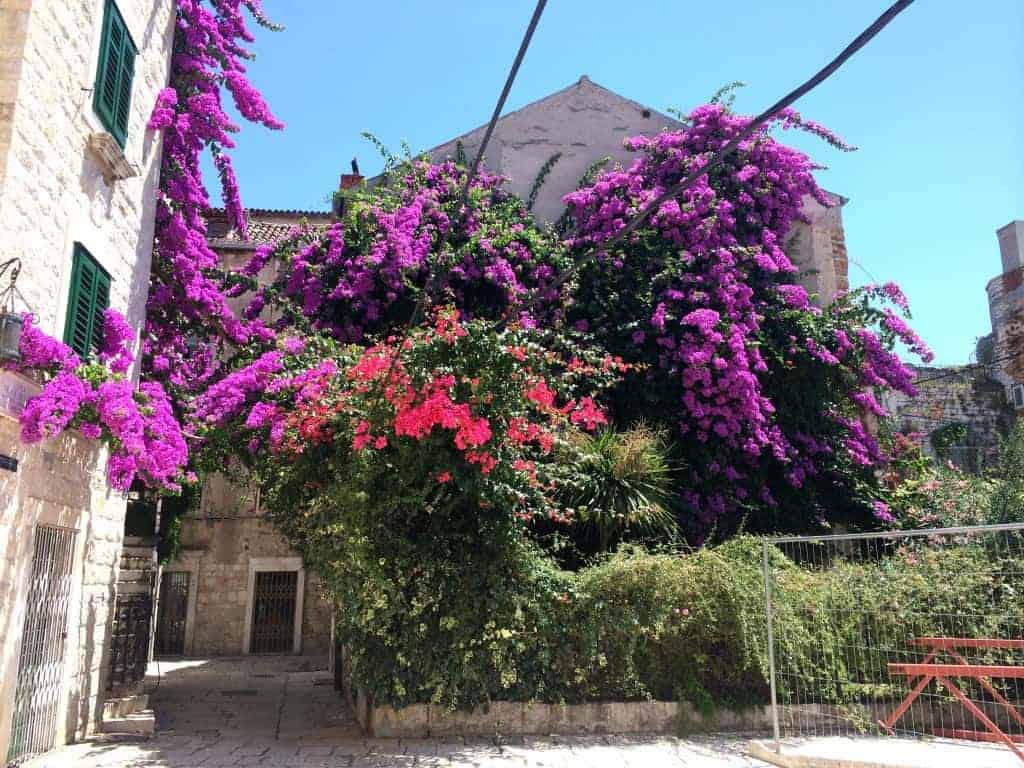 Then we were in Rome for a bit which obviously was pretty incredible. We took a bus tour and I learned a ton about all of the fantastic scenery. All of the historic beauty took my breath away! We basically just hopped on and off the bus, explored, and ate lots of yummy Italian food. 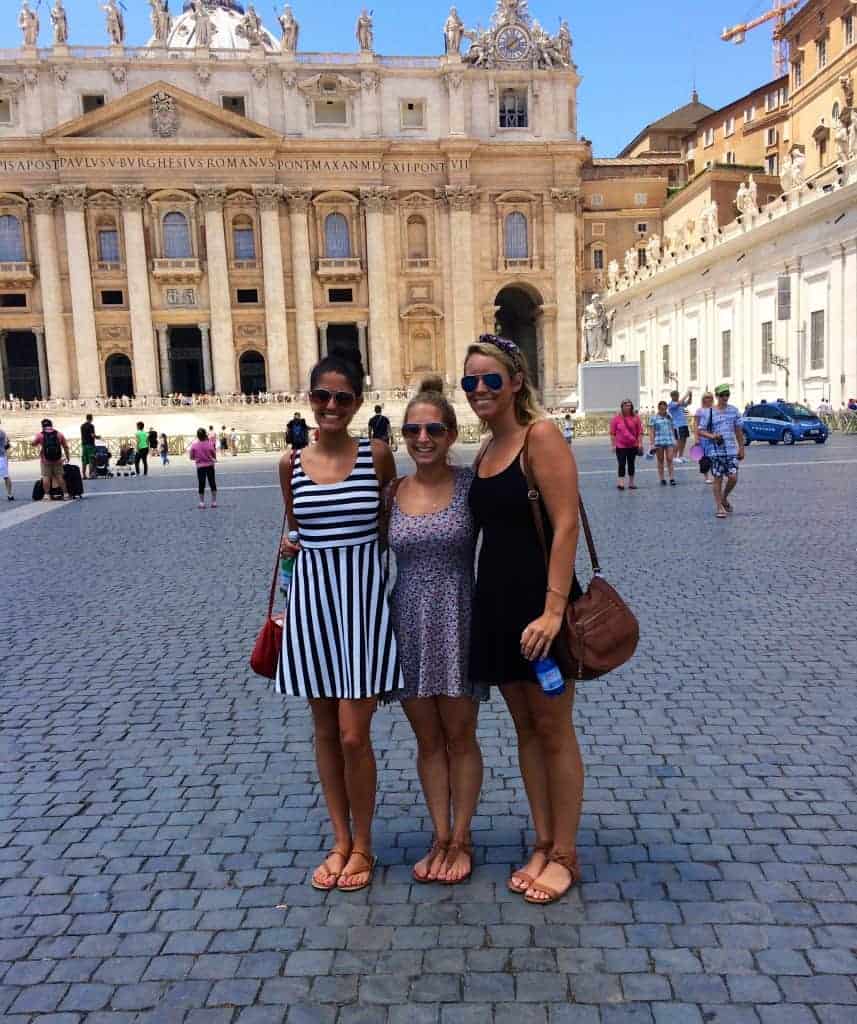 Everything in Rome was so untainted by modern influences and so rich with history. 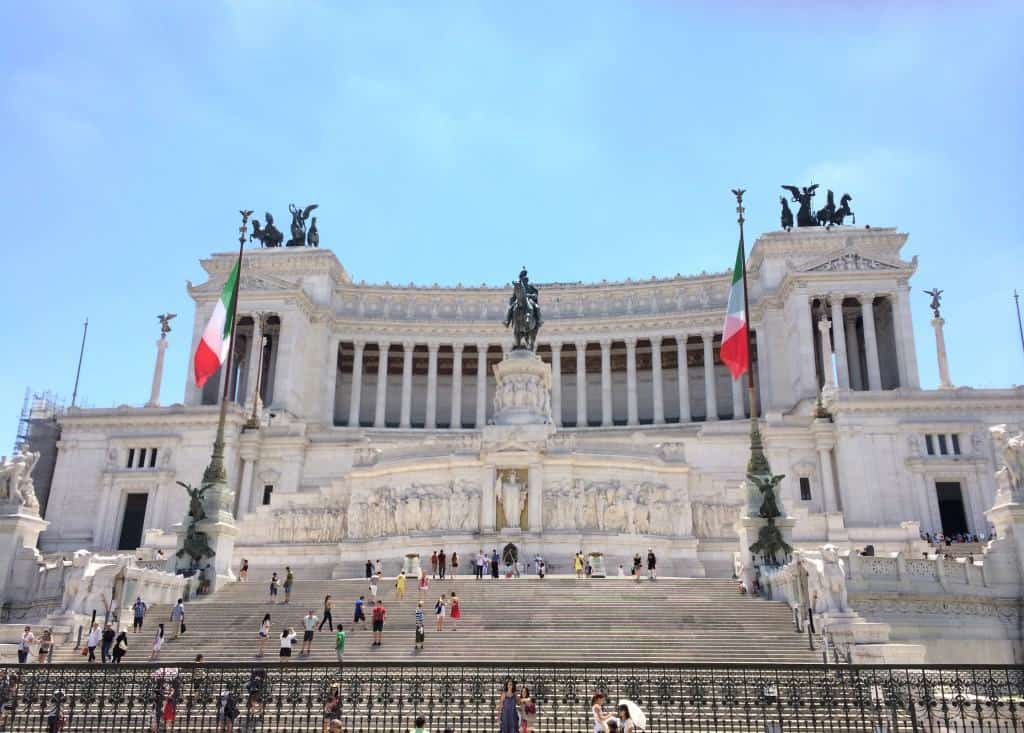 We ate lunch near the Vatican at a totally authentic little Italian restaurant. I had canneloni, which was basically pasta stuffed with a ricotta spinach mixture topped with marinara. It was perfect and I savored every bite. We also had the best salad ever, which was just frisée, this amazing vinaigrette, salt and pepper. So simple but to die for. For dinner we had the best Sauvignon blanc ever, an incredible Italian cheese plate, ravioli and octopus pasta. It was all crazy good! 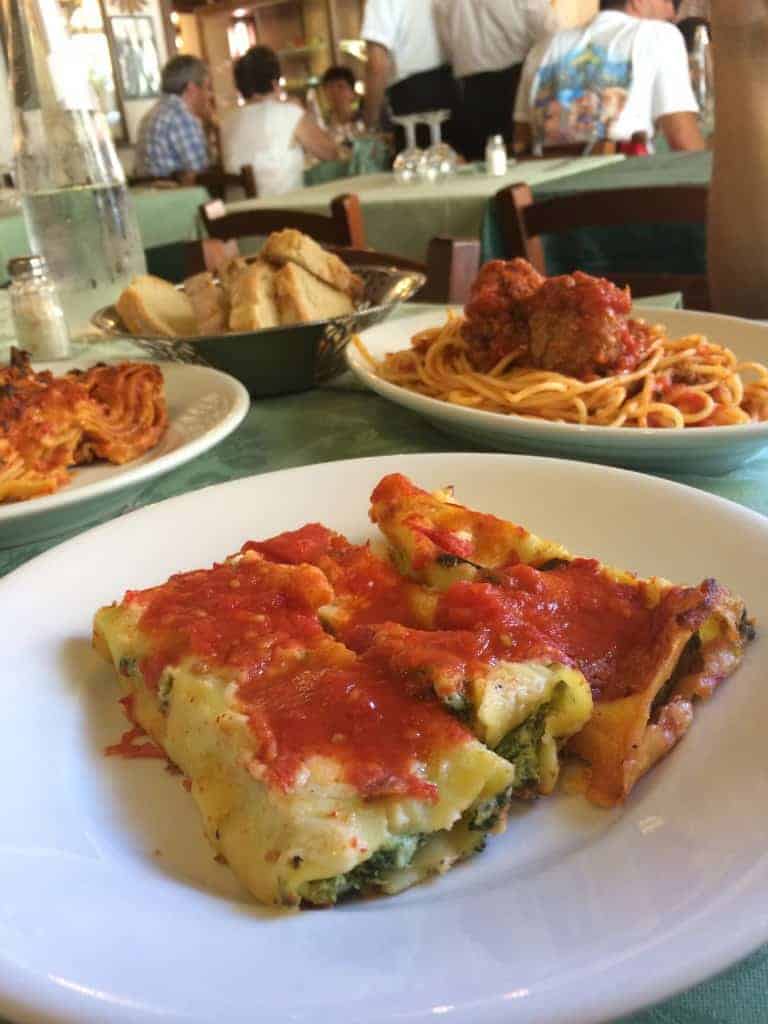 The owner of our Hostel recommended this adorable Sicilian patisserie called Panella which had the most authentic pastries. I got a wholemeal blueberry tart and a little sandwich with fresh whipped cream and berries. Since they don't have coffee in Europe, we of course got espressos! 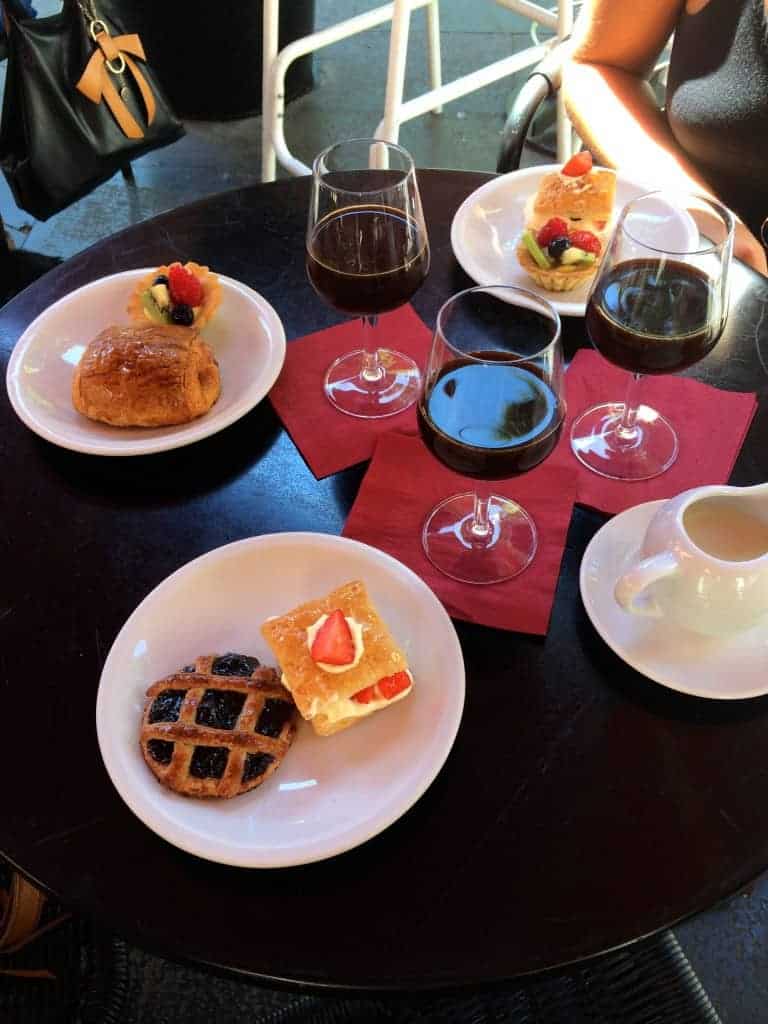 Aaaaand that's all for now! I'll chat about the rest of the trip in a post next week so I can squeeze in a giveaway and a recipe this week! I'm working on updating the blog a bit, so get excited...]]>