What I really wanted to call these burgers was "crack patties." 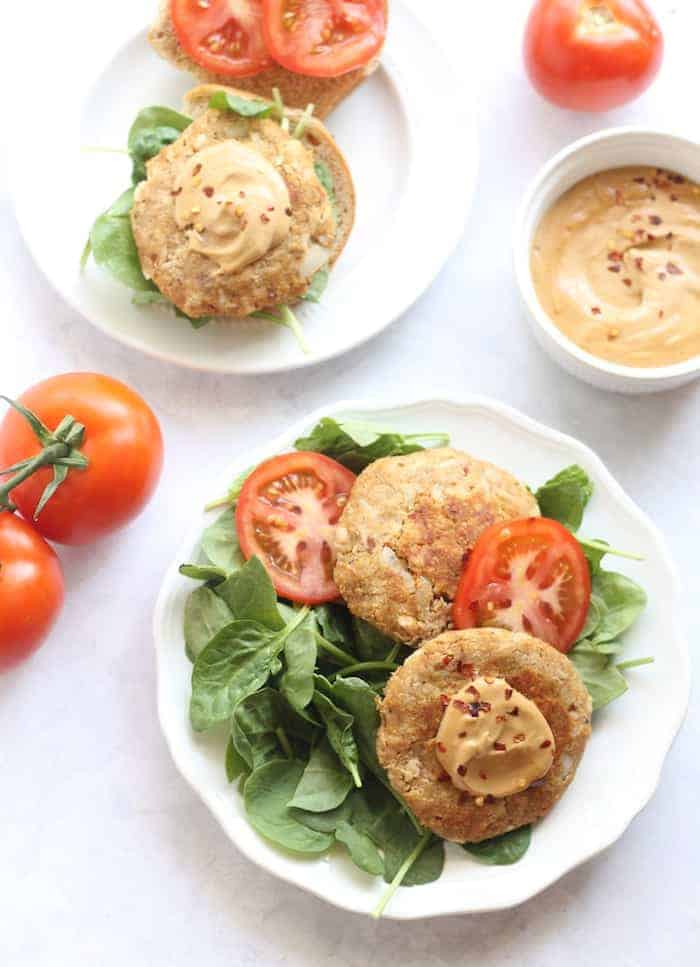 Because they're next level addicting. The epically rad combination of the Asian-inspired burgs (soy sauce + sesame oil + ginger + sriracha) plus the creamy-dreamy-sweet-salty-spicy cashew cream makes me wish I had nine tongues.

I literally ate a whole burger (on a Trader Joe's whole wheat bun thankyouverymuch) and then proceeded to drench another bun half in the cashew cream.

And then I put some cashew cream in a little bowl and stirred in some water and VOILA! The sexiest salad dressing you ever did taste. 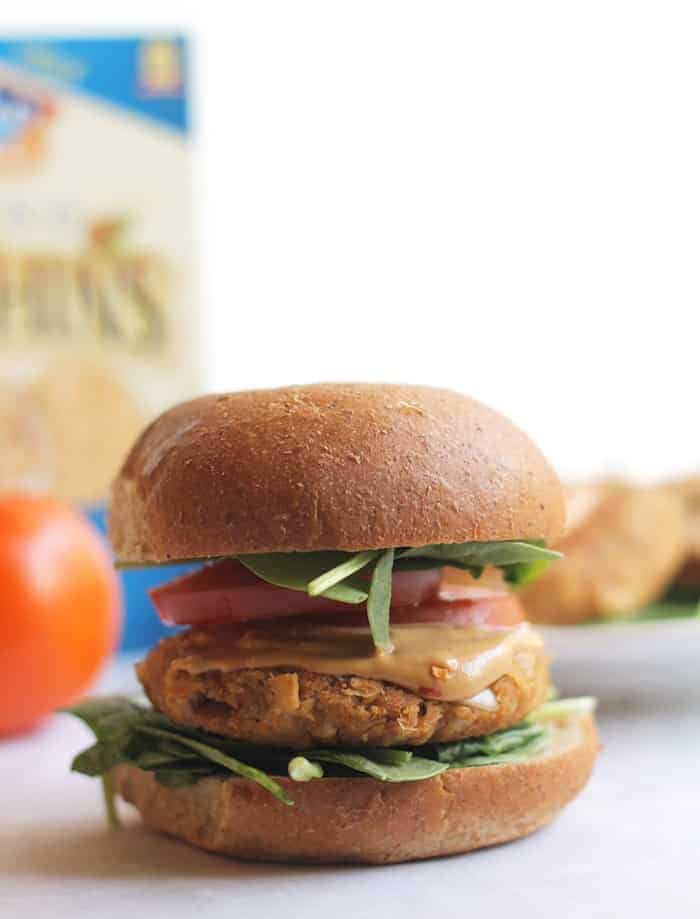 When my friends at Blue Diamond sent me Almond Nut Thins to work with this month, I knew I wanted to do something more exciting than hummus and crackers. Don't get me wrong---hummus and crackers is most definitely a food group in my life. But these snackities are so gosh darn crunchtastic and tasty that I knew I had to stuff all their goodness into something special.

Tuna burgers always call for bread crumbs anyway, so I said sayonara to those bad boys and ground up the Nut Thins instead. The combination of those plus almond meal is pure perfection in the flavah flave  and texture department. All the departments of all the senses! 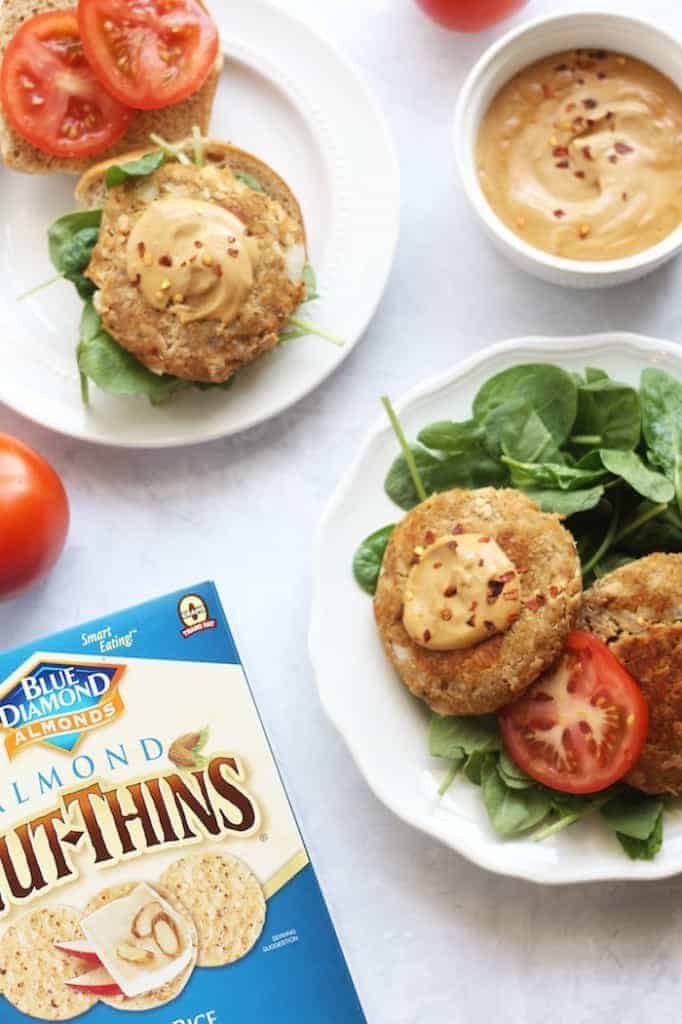 I've woken up with super stiff fingers for about a week now. I eat pretty much all the anti-inflammatory foods in the book. I drink a lot of water. I work out multiple times per week. So why can I not make a fist like a normal human bean?!

I've learned that you can eat all the kale in the world and still be a victim to conditions beyond your control. The stiff finger issue happened to me this past winter as well, so I'm really anxious for my rheumatology appointment later this month. Certain experts recommend fatty fish to help combat inflammation, so hopefully if I eat nine tuna burgers I'll wake up with normal fingers again.

A girl can dream! 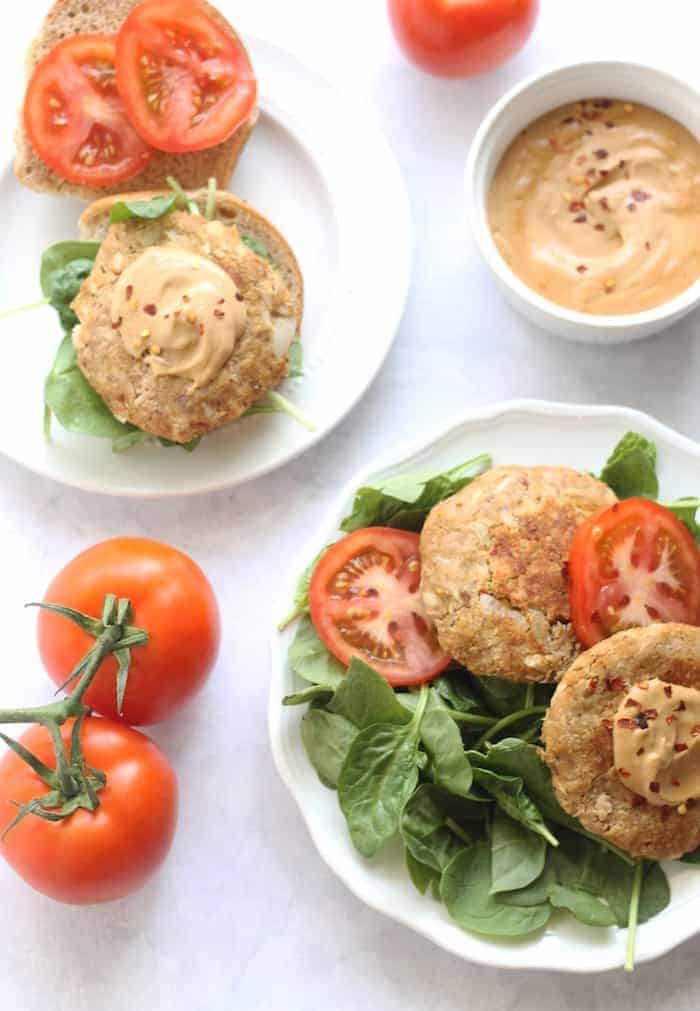 Life hack: Get some bottled minced ginger. I use this one from The Ginger People (no, I'm not being paid to say that). I buy it at Whole Foods. It's SO much easier than grating it yourself!!

I think putting Nut Thins on top of the burger would also be a great decision. And maybe even some on the side dipped in copious amounts of cashew cream. Except maybe use the cashew cream as the vehicle because it's that damn delicious.

Let's all pretend we have nine tongues. Life is so much tastier that way.

For the tuna burgers:

*If you don't have nut thins, feel free to use a scant ½ cup of breadcrumbs instead.

This post is sponsored by Blue Diamond Nut Thins. I was provided samples and compensated for my time. All opinions are my own. Thanks for supporting the brands that make Hummusapien possible!