Hello lovely ladies and gents! We're back with another week of meal inspiration, and let me tell you...it's been an interesting one. P.S. Don't forget to enter The Colorful Kitchen cookbook giveaway on my Creamy Baked Kale and Artichoke dip post from Monday! 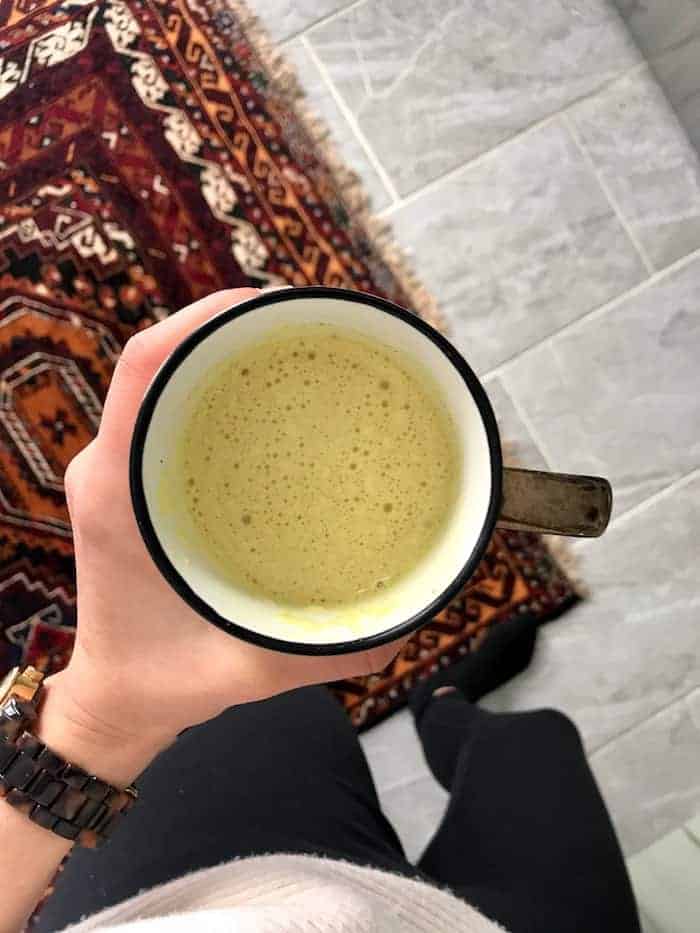 Jeff's been having some pretty bad GI issues with burning pain in his upper abdomen on and off for over a year now and we're experimenting with a GERD-friendly diet for him until we can get in to see the doc. That means limiting caffeine (OMG), tomatoes, citrus, and no eating a while before bed. Oh, and eating more bland foods. Similar to a death sentence, basically.

I kid! But seriously, the past few days have made me so incredibly grateful that I don't have a disease or an allergy that dictates the way I eat. I really take it for granted.  I can't imagine not being able to have coffee in the morning (even though it makes me have to run to the bathroom after...worth it) or nut butter or my lasagna loaded with tomato sauce. Our eating patterns are dictated by so many things and it's important to remember that everyone is on a different journey, whether they're experimenting from a place of curiosity or overall health or because they've been diagnosed with an allergy or intolerance that effects their food choices.

Craving a warm cozy drink in the morning but steering clear of coffee, I decided to make us turmeric lattes inspired by McKel of Nutrition Stripped. I had leftover full fat canned coconut milk leftover so I did 2 cups of a mixture of that, almond milk, and water plus a teaspoon of turmeric, some fresh ginger, black pepper, and about a tablespoon of raw honey (plus cinnamon in mine). I heated it on the stove and then blended it and it was amazing. 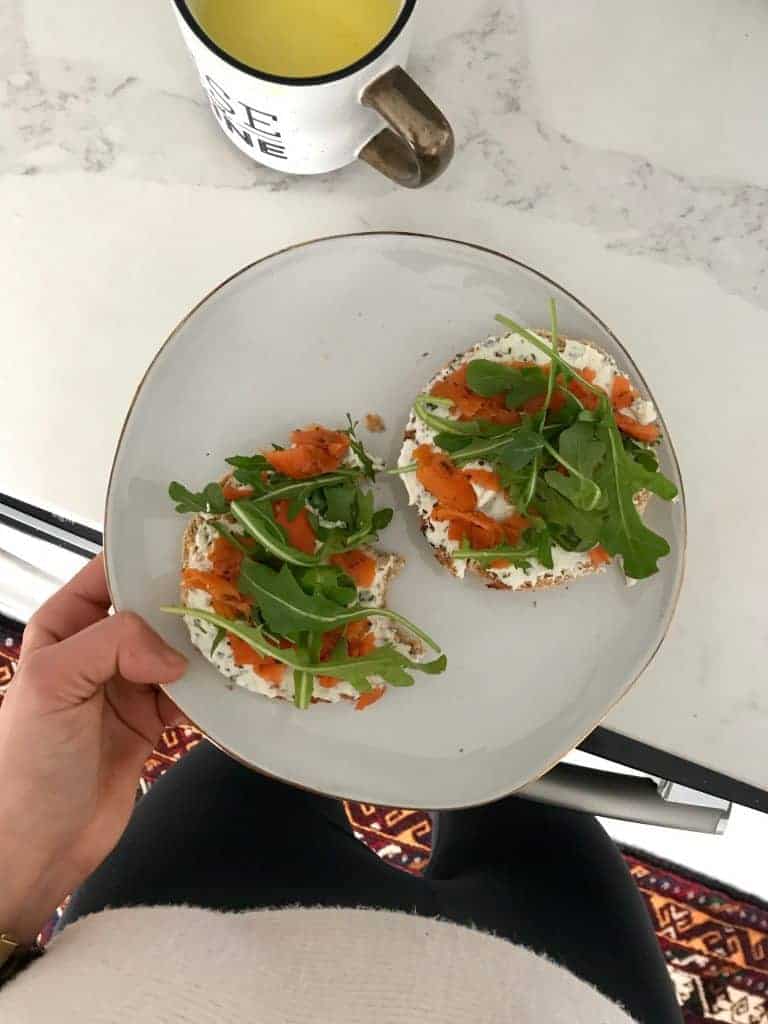 I was craving bagels so I grabbed  some sprouted wheat ones in the frozen section at Whole Foods along with a tub of Kite Hill's oh so instagrammy almond-based chive cream cheese because I'd never had it before and I was curious what the buzz was about. It tasted like normal cream cheese (which I eat, too) and it was super satisfying (although quite pricey). I had leftover carrot "lox" I've been experimenting with so I topped it with that plus arugula. An extremely delish breakfast! 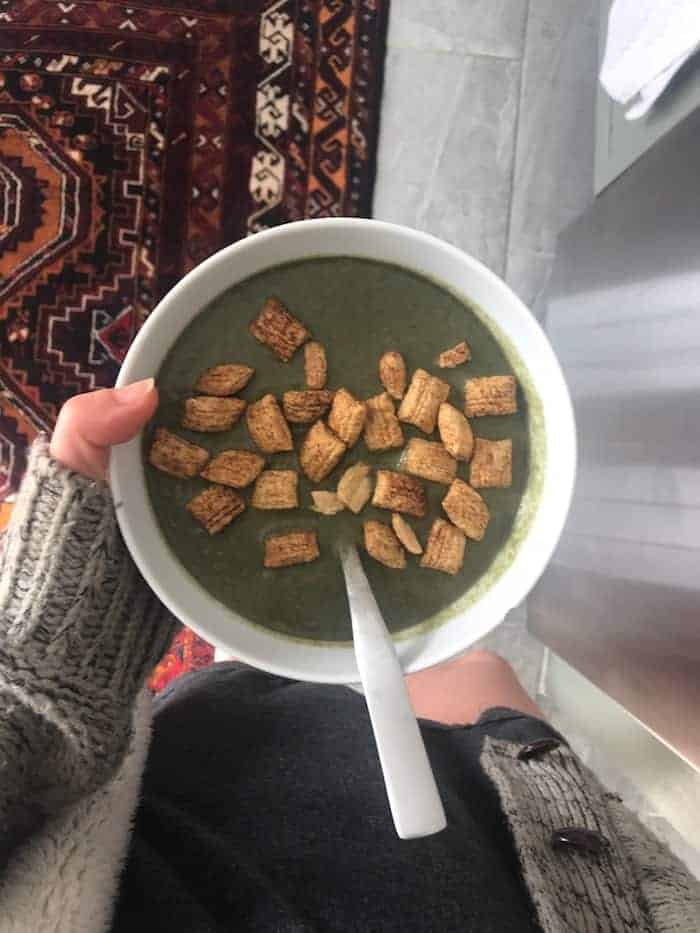 I've been craving cereal like crazy. Usually cinnamon Puffins or cinnamon Kashi. Sometimes I throw granola in there, too and eat it with almond milk when I wake up. 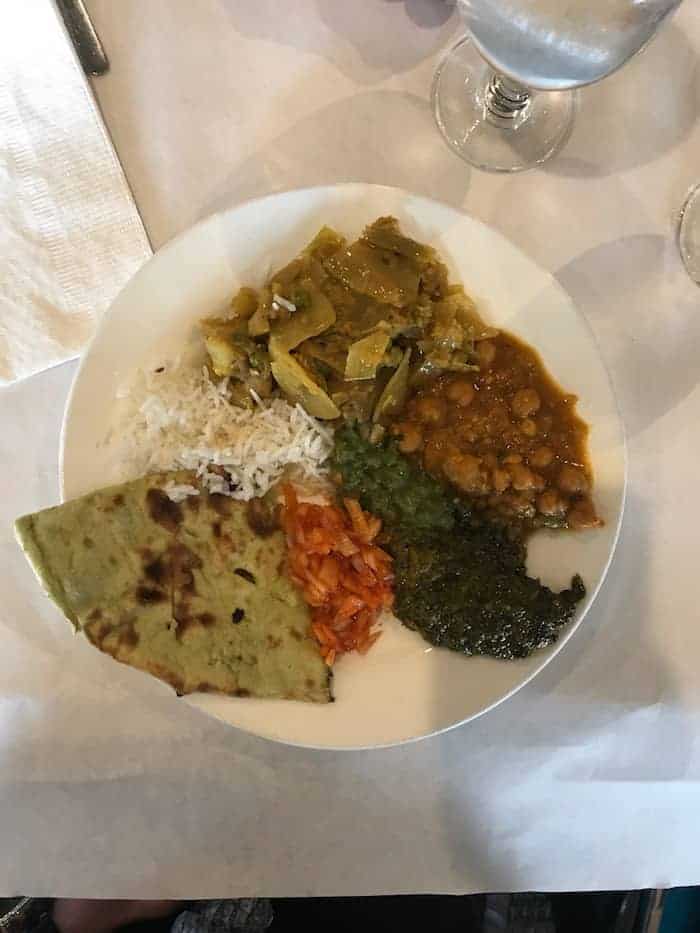 The yummiest buffet at Aab India. 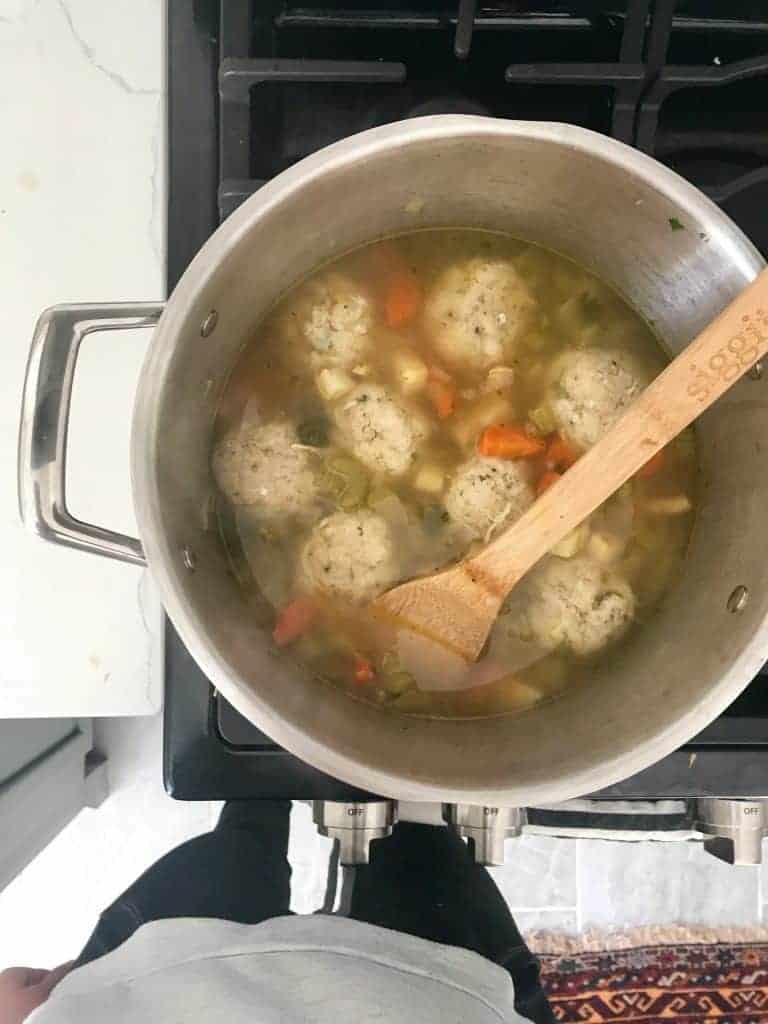 Matzah ball soup!! Jeff was sick with a cold so I made him a big pot of chicken soup like my mom used to make. I used this recipe but added extra of all the veggies, a big parsnip, fresh parsley, and 8 cups of Pacific's organic chicken broth instead of water. I added onion powder, garlic powder, and parsley to the matzah balls and used broth from the soup instead of water. I doubled that recipe and boiled the matzah balls separately instead of in the soup (I kind of just ate around the actual chicken pieces, no big deal. Chicken broth is KEY for matzah ball soup.). It was love at first bite. 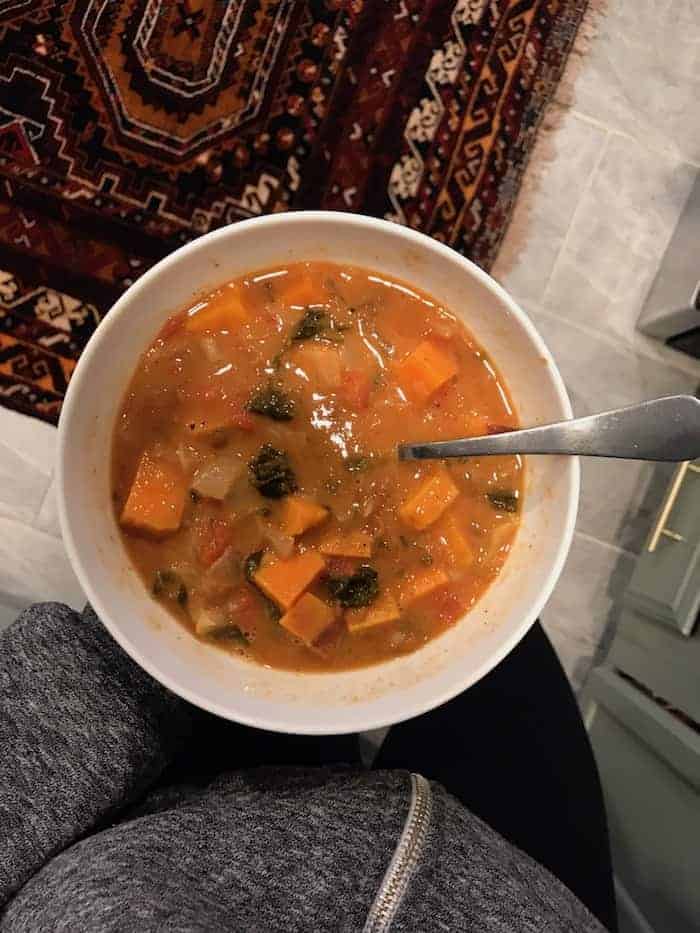 Leftover African Peanut Soup from The Oh She Glows Cookbook that I froze, topped with extra peanuts. 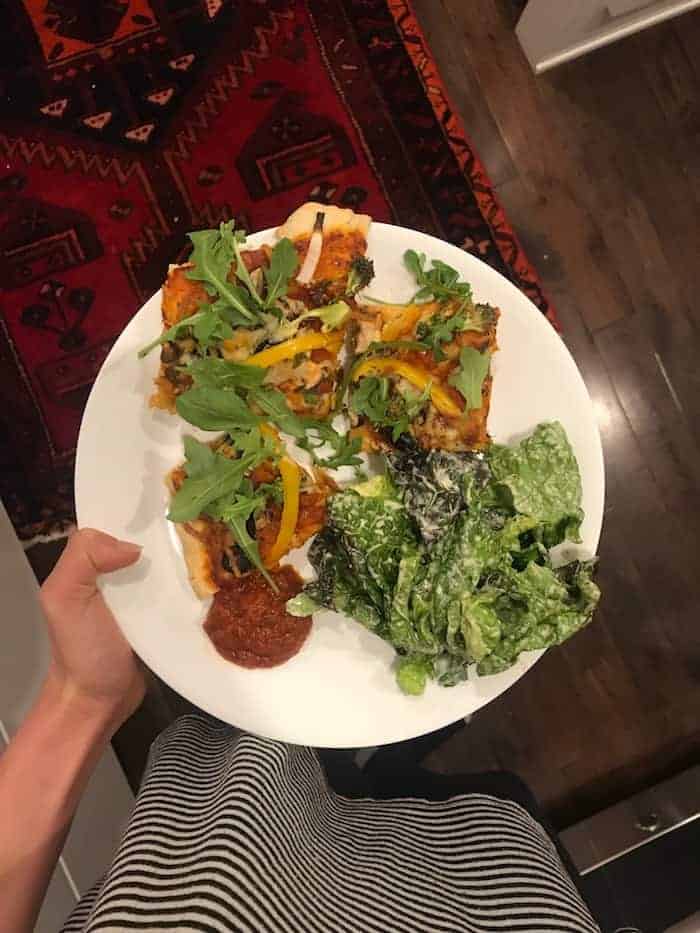 Pizza night! My friend made dough and we topped it with Carfagna's pizza sauce, tons of veggies, mozzarella, and arugula. I made a caesar salad on the side using this recipe for the dressing (I use romaine, add a bunch of lemon to the dressing, and leave out the chickpeas). I went back for seconds of everything, obviously. 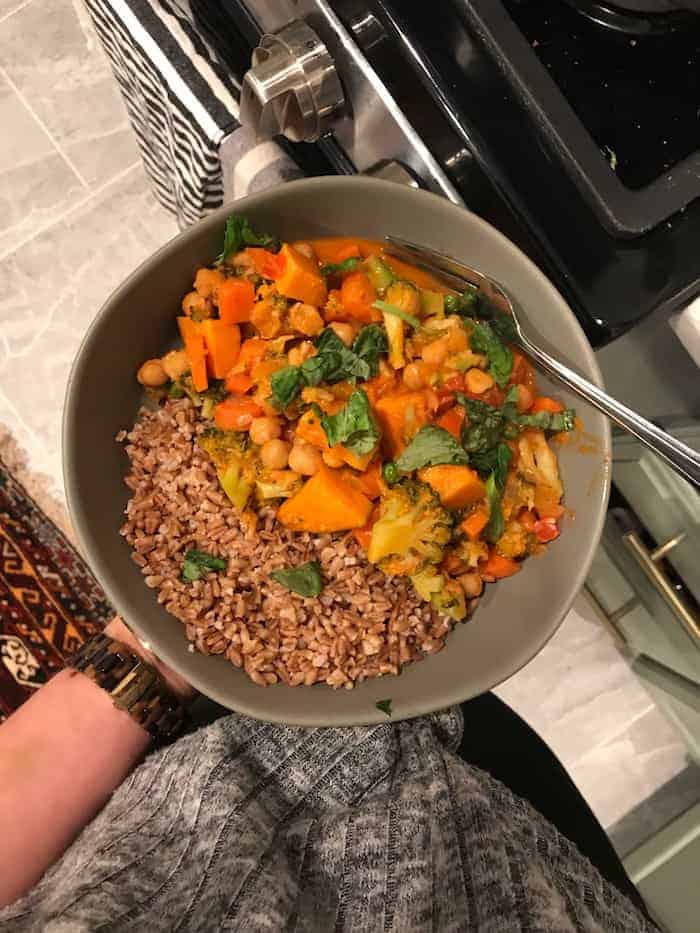 One Pot Vegetable Thai Red Curry. Wowza...we loved this one. I used sweet potatoes, extra broccoli for the cauliflower, and canned coconut milk because that's what I had on hand. I encourage you to experiment and use recipes as a guide when you're cooking! You can do it. 🙂 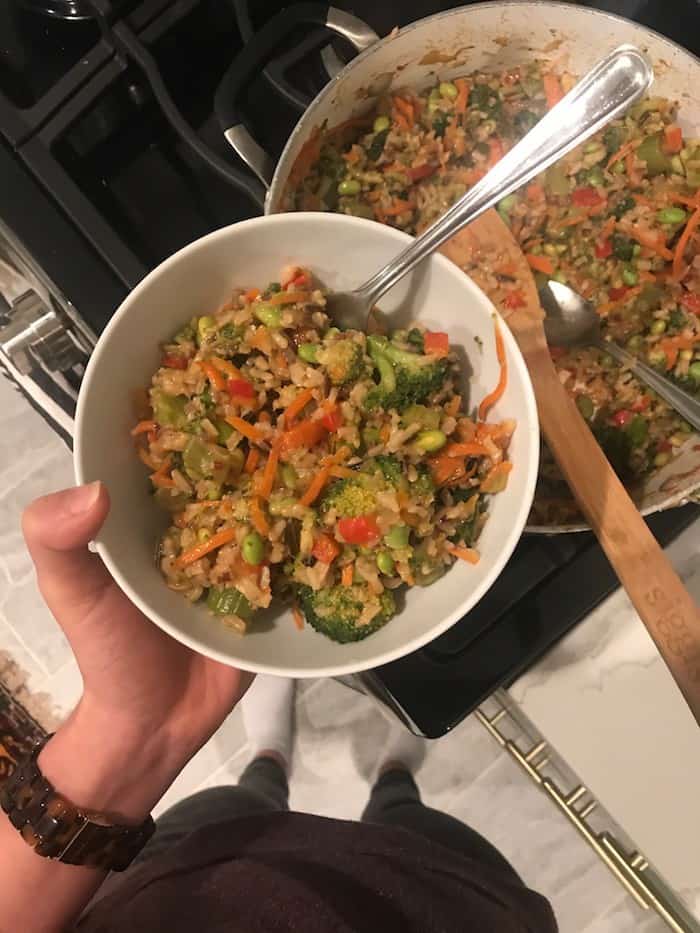 A huge pot of veggie stir fry similar to this recipe but I added peanut butter, 4 stalks of celery instead of snap peas, no pepper, extra broccoli, used more soy sauce and lime juice, and didn't do pineapple or chia seeds. 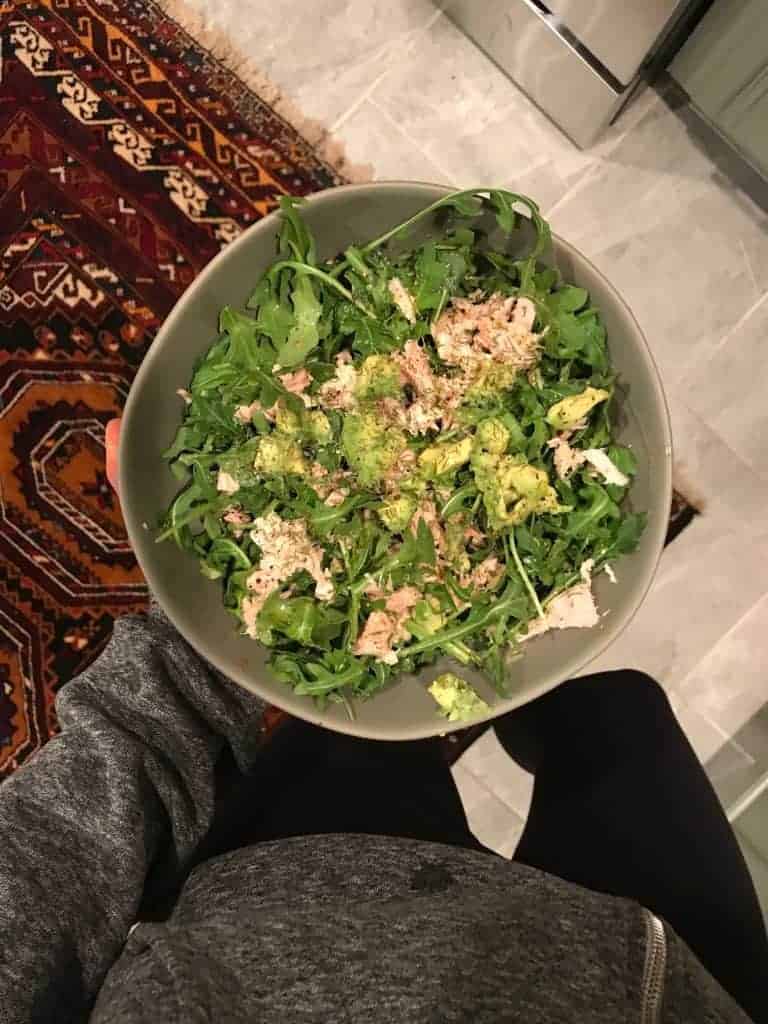 Arugula salad with olive oil and lemon juice, wild tuna, avocado, salt, pepper, and dried dill  + sweet potatoes and SunButter on the side. 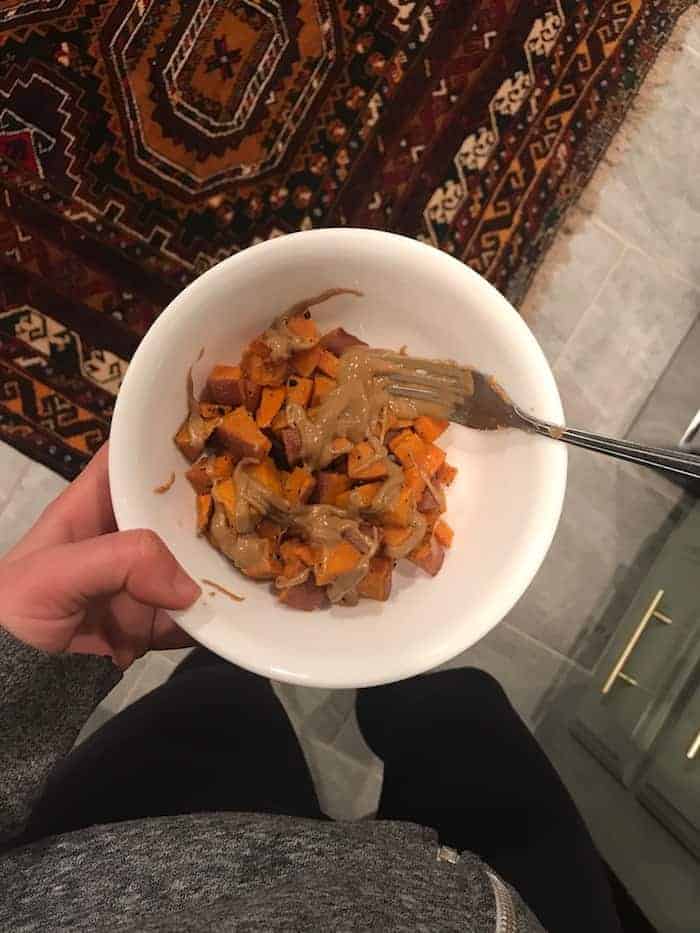 Per above, I've been obsessed with roasted sweet potatoes with peanut butter or SunButter. Do it! 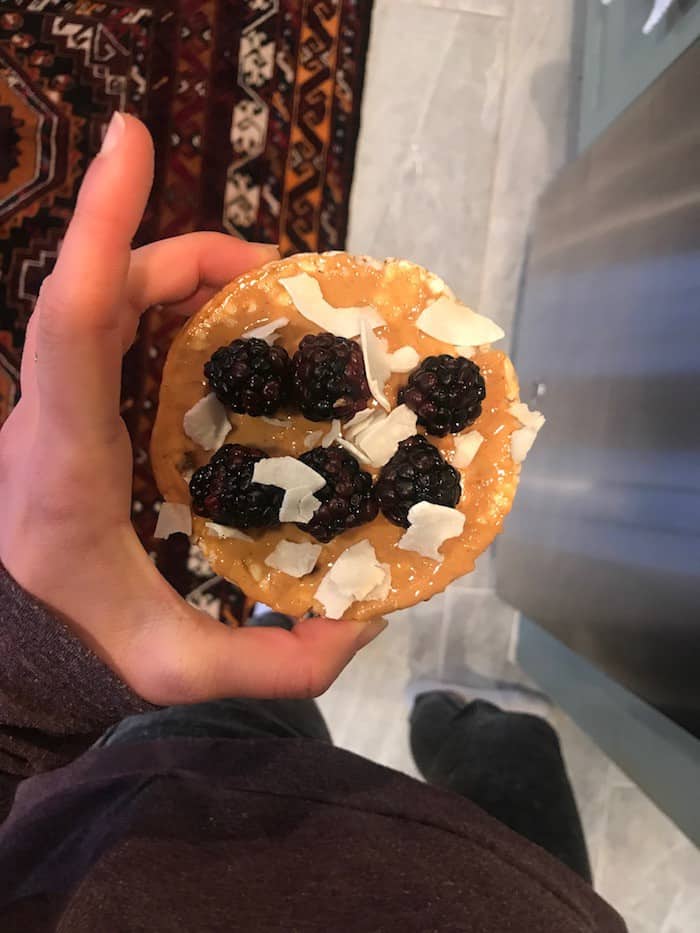 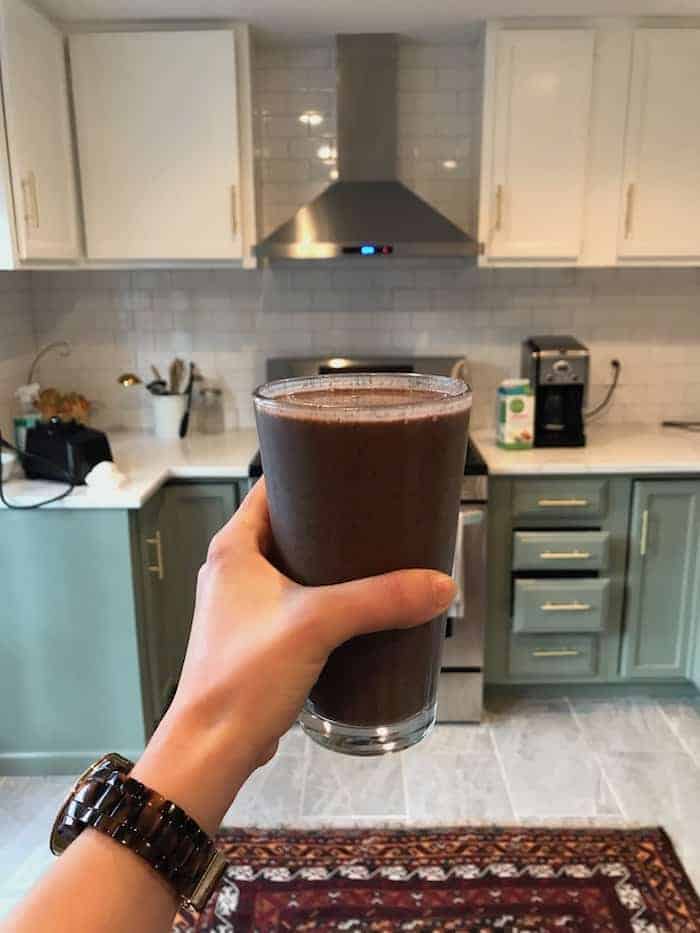 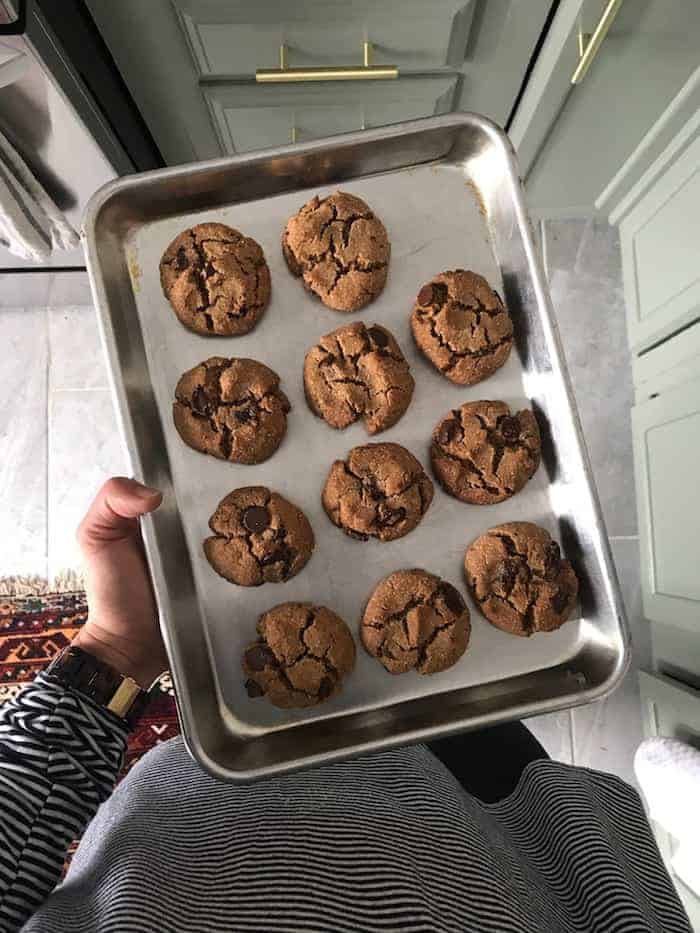 These Chocolate Chip Cookies are my FAVORITE right now!! I've made them exactly as written with a real egg and a flax egg and while both amazing, they hold together way better with a real egg. I brought them to my friend Simi's house and she made us hot chocolate to go with it made from hot water, coconut oil, and this incredible drinking cacao all blended up. It was the best.

Have the greatest week!