I don't know what I like better....hummus or Trader Joe's or avocado or coconut or dark chocolate. Okay coconut's out. So is avocado. It's def a triple tie between TJ's, hummus and dark chocolate. 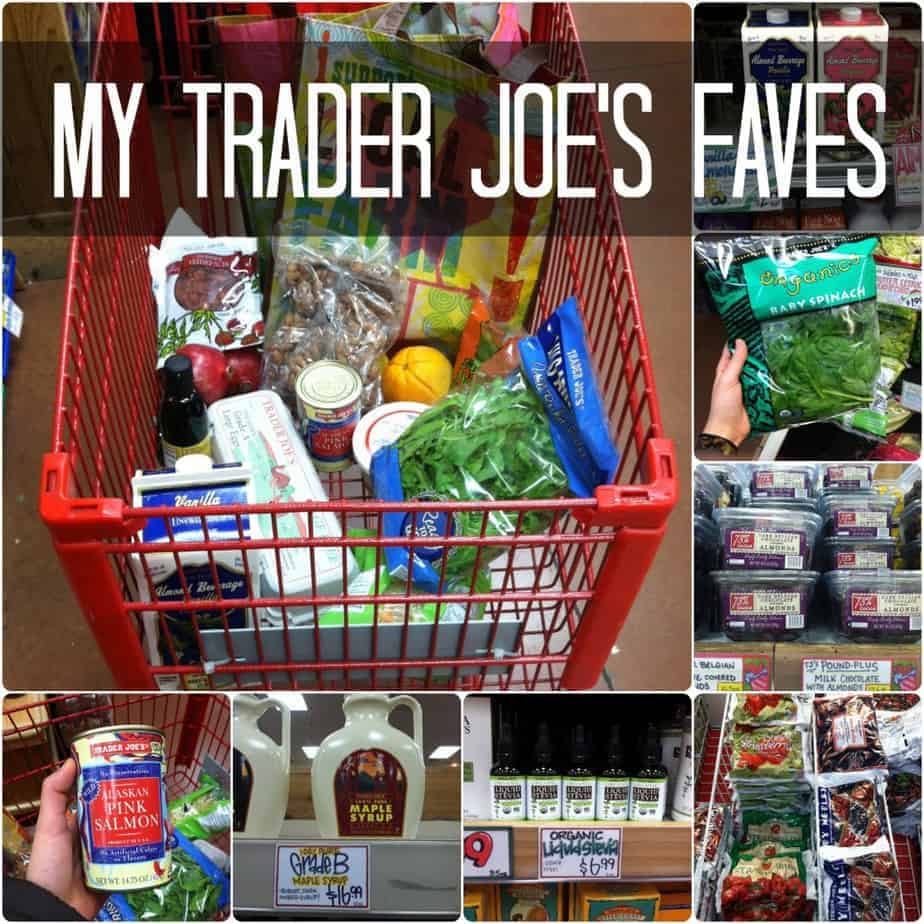 If you know me at all, you know I eat, breathe and live Trader Joe's.

I love their smiling employees. I love their coffee samples and colorful signs. I love that if you ask about a dark chocolate bar, they'll break it open and give you a piece. I love that they're not all hoity-toity-you-can't sit-with-us-unless-you-have-a-reusable-bag-and-Lulu-Lemon-leggings.

But most of all, I love the cheap prices and the comfort of knowing that I don't have a scan the label for high fructose corn syrup, partially hydrogenated oil and yellow #5. So today I decided to be that weird customer who snaps a picture of everything she buys. They were probs all wondering what the hell I was doing. I'm surprised no one asked. Actually I'm not, because that's how they are. They don't care if you take a gazillion pictures and only leave with an avocado or three. They just want to give you a cracker sample and ask you what you're doing this weekend. That's all.

Without further adieu, here's a lengthy snapshot of my favorite go-to Trader Joe's products. These are things I usually try to exclusively purchase at TJ's either because of the ingredient list or the price. P.S. I'll go ahead and tell you all the prices since they're all engrained in my brain anyway. Weird? Definitely. 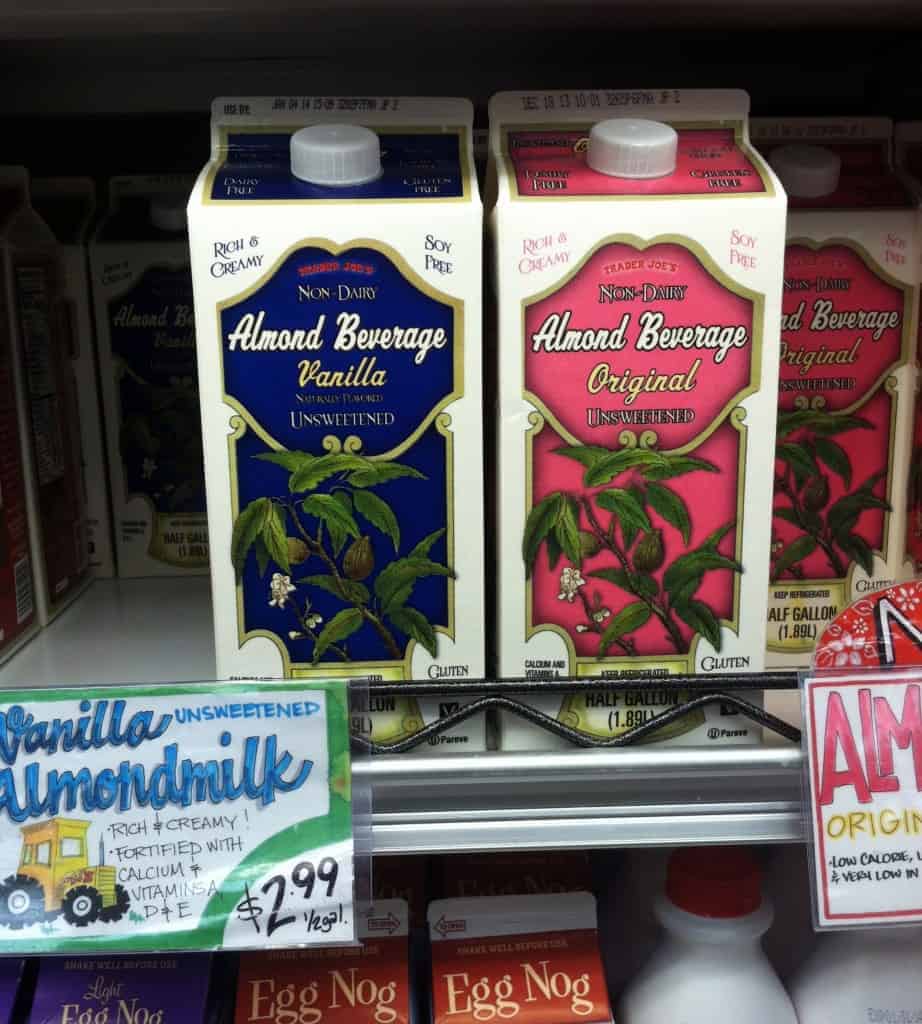 This almond milk is so freaking delish that I drink it straight out of the carton. Legit. It only costs $2.99, which is about 50 cents cheaper than most other brands. Unsweetened almond milk is the only "milk" I drink, so I'm all about a good price. Unlike most almond milk, this one doesn't have carrageenan, a hotly debated "natural" additive derived from seaweed. It's added for thickness and you can find it in everything from almond milk and yogurt to ice cream. The downside? It's suspected to cause colon cancer and gastrointestinal issues in lab animals. The FDA allows it in our food supply, but hey...they also allow partially hydrogenated oil (not for long) and artificial colors that other countries forbid so don't go relying on them. To make a long story short, natural doesn't mean healthy. Read your labels! FYI, Silk almond milk doesn't have it, either. 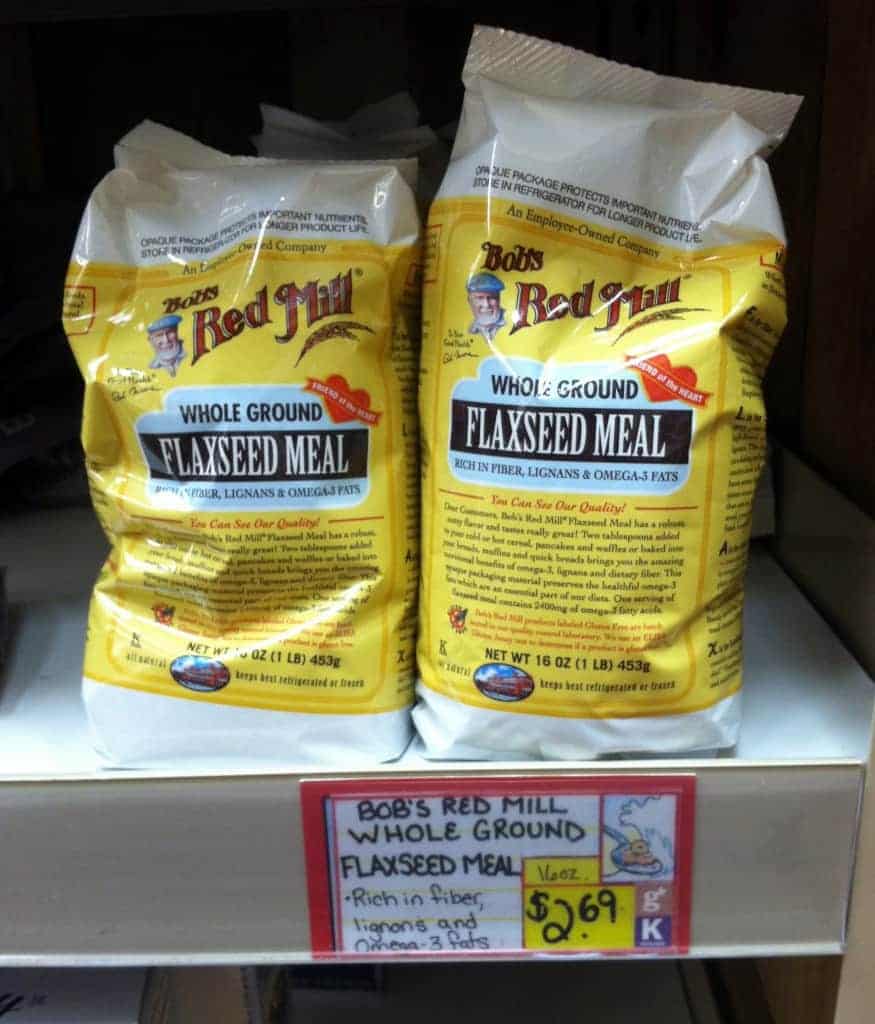 I add a tablespoon of these omega-3 rich seedies to everything from smoothies and oatmeal to baked goods. You only absorb the nutritional benefits from ground flaxseed, so don't buy the whole seeds unless you plan on grinding them yourself. Make sure to store it in the fridge! Oh and it only costs $2.69. I know, right?! 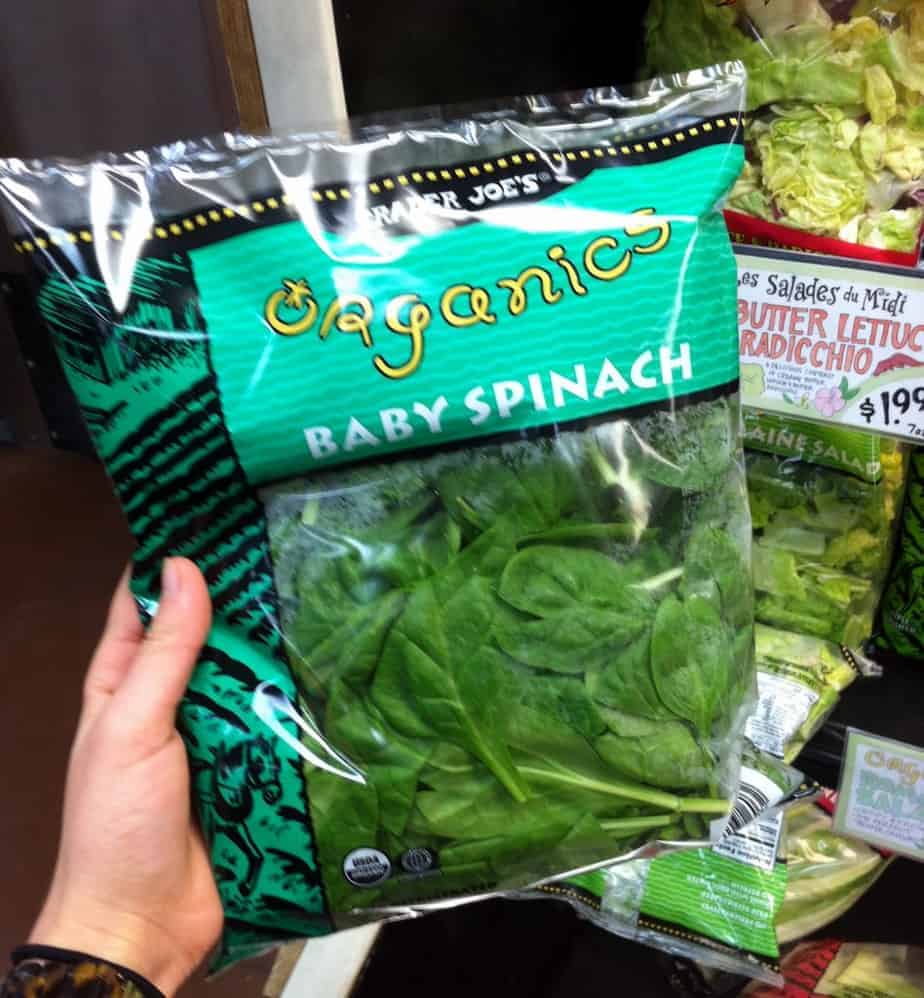 I put a huge handful of this stuff in all my smoothies. I love that it's only $1.99. Hiiiiii vitamins. 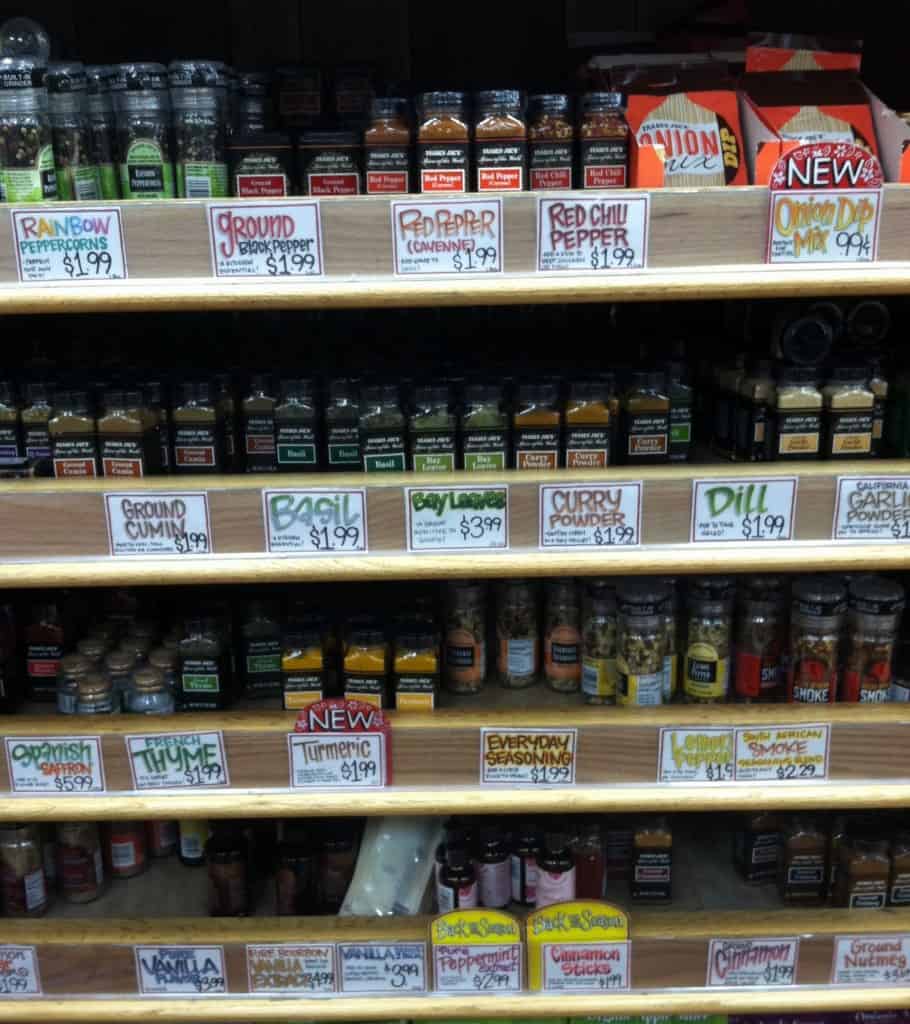 TJ's spices are the bomb dot com because they have no funky additives and they're all only $1.99. I always have their garlic powder, cinnamon, cumin, cayenne, basil, oregano, pepper grinder and vanilla extract on hand. 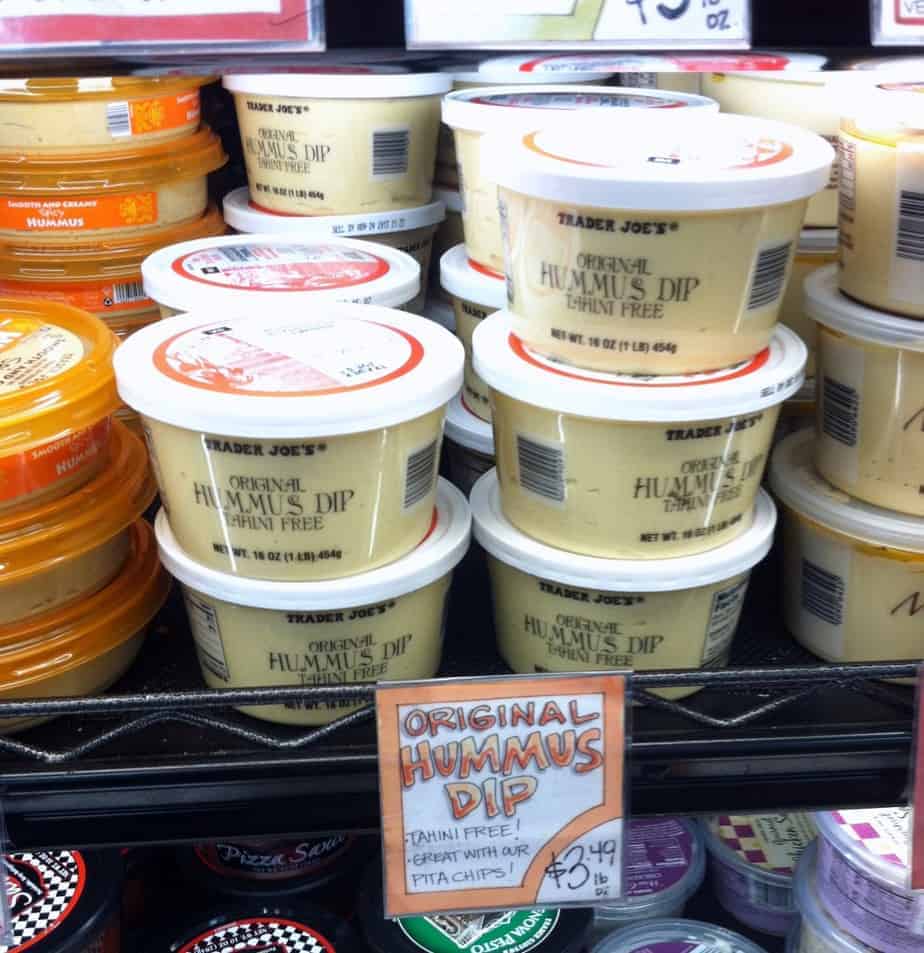 This stuff is the shiz. It's super light and fluffy and has the most stupendous whipped texture. The best part is that it doesn't have narsty preservatives like potassium sorbate and sodium benzoate. Aaaaand it only costs $3.49 for a hugh jass tub. Hummus ain't always chickpeas and tahini! Make sure to read your labels. I've seen everything from cultured dextrose to guar gum in hummus. Those don't belong in there now do they? 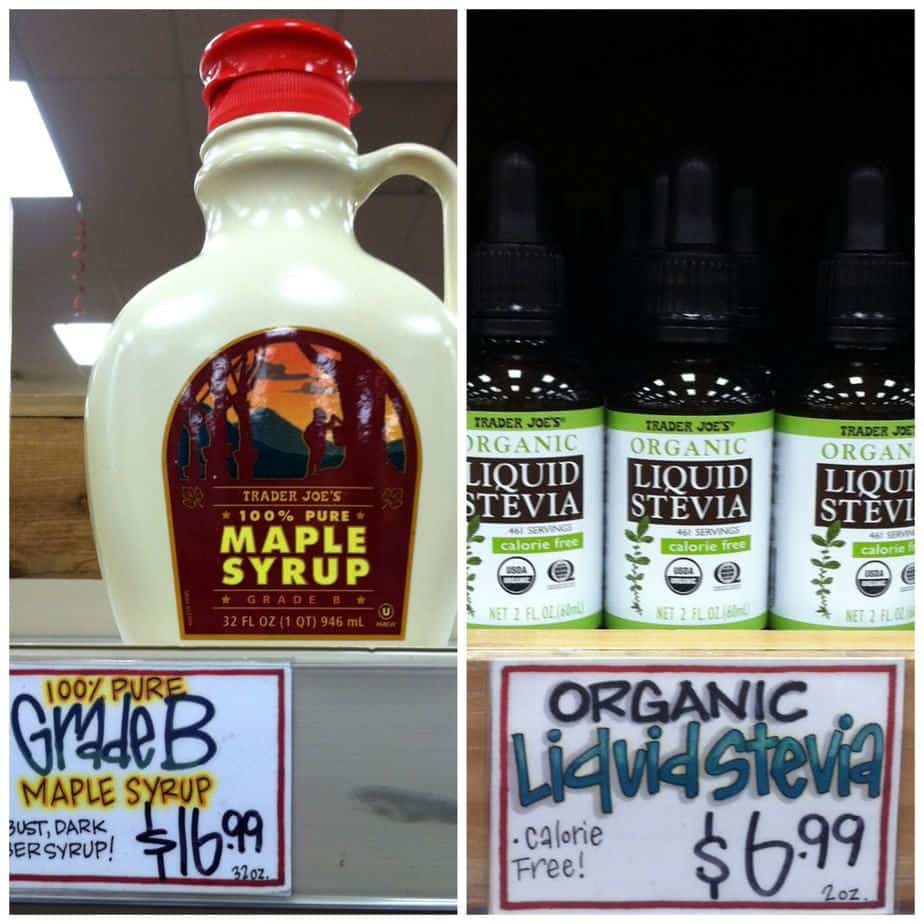 Pure maple syrup is the real deal--perfect not only for topping pancakes, but also for a wholesome sweetener in baking. I like to get the huge tub because it's the cheapest per ounce. I also love adding a couple drops of liquid stevia (an all natural zero calorie sweetener) to smoothies for extra sweetness. 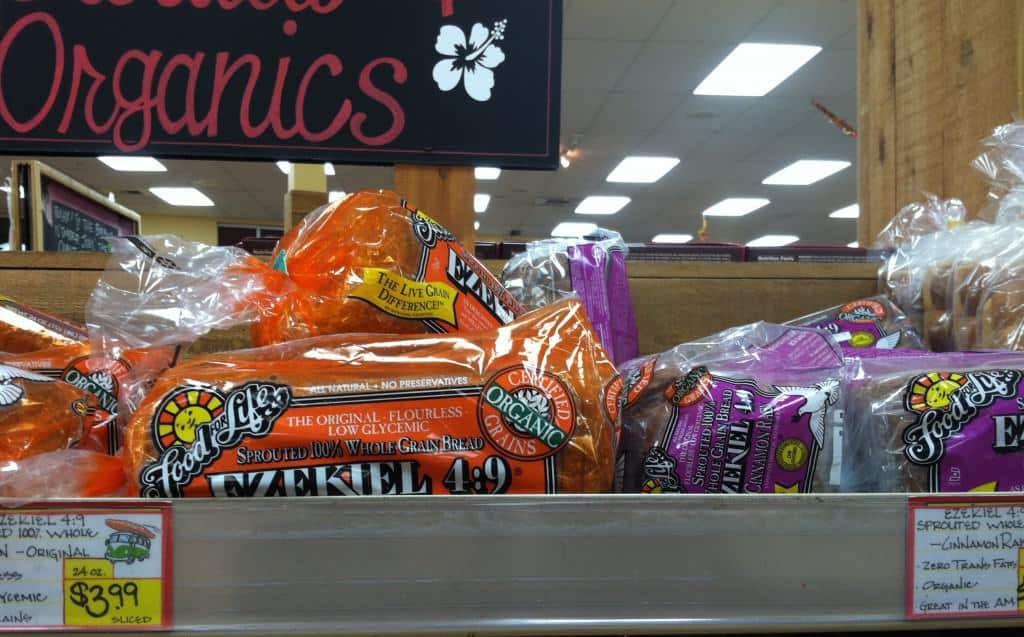 Toast a piece of the cinnamon raisin flavor, slather it with almond butter and cinnamon and prepare for a MAJOR foodgasm. This bread has no funky dough conditioners, preservatives or weird ingredients. Because it has no preservatives, it needs to be stored in the fridge or freezer (which works well for me since it takes me like two months to go through a loaf anyway). TJ's is the only place I know of that sells it fresh, and for a bargain, too--$3.99. 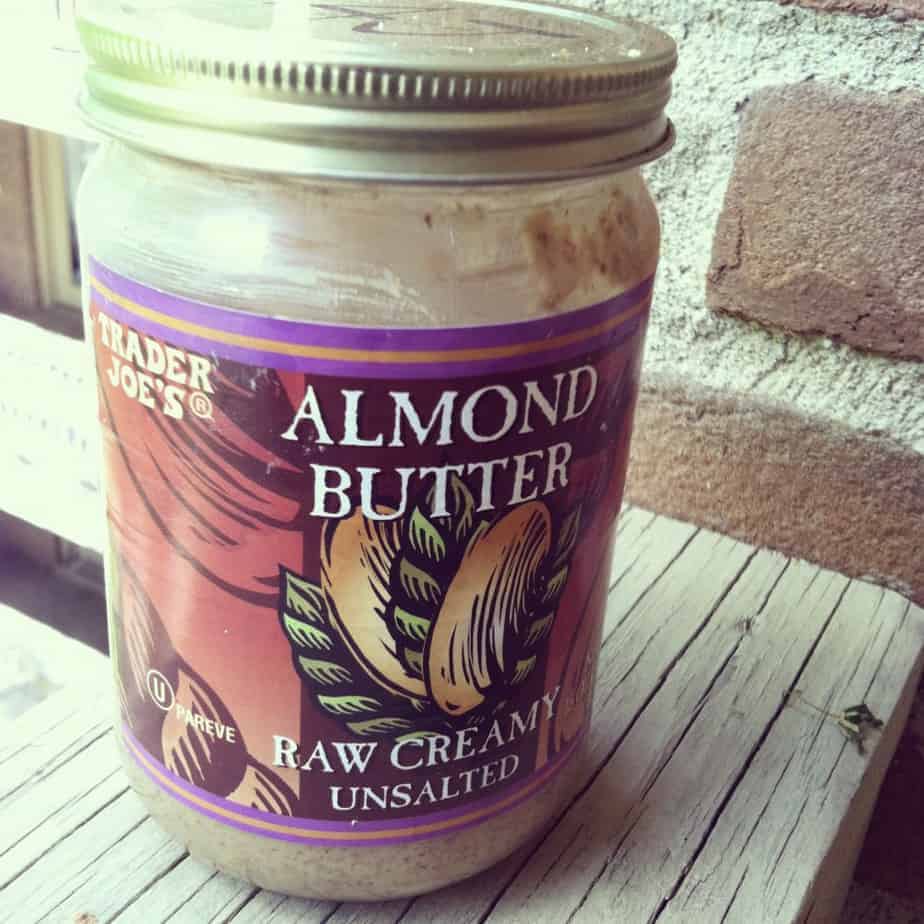 You know how I feel about TJ's raw creamy almond butter. Heaven. They've been out of it lately due to the honeybee issue, so make sure to stock up whenever you see it. TJ's sells it for an unbeatable price of $5.99.

I use this instead of butter in baked goods and for high heat sautéing, but I mostly use it as a moisturizer. It's hands down the best eye makeup removed EVER and it makes my legs soft as a baby's bottom. Just make sure to put it on after the shower when you're still wet. How could I forget?! It's also the best vehicle for popping popcorn on the face of the planet. 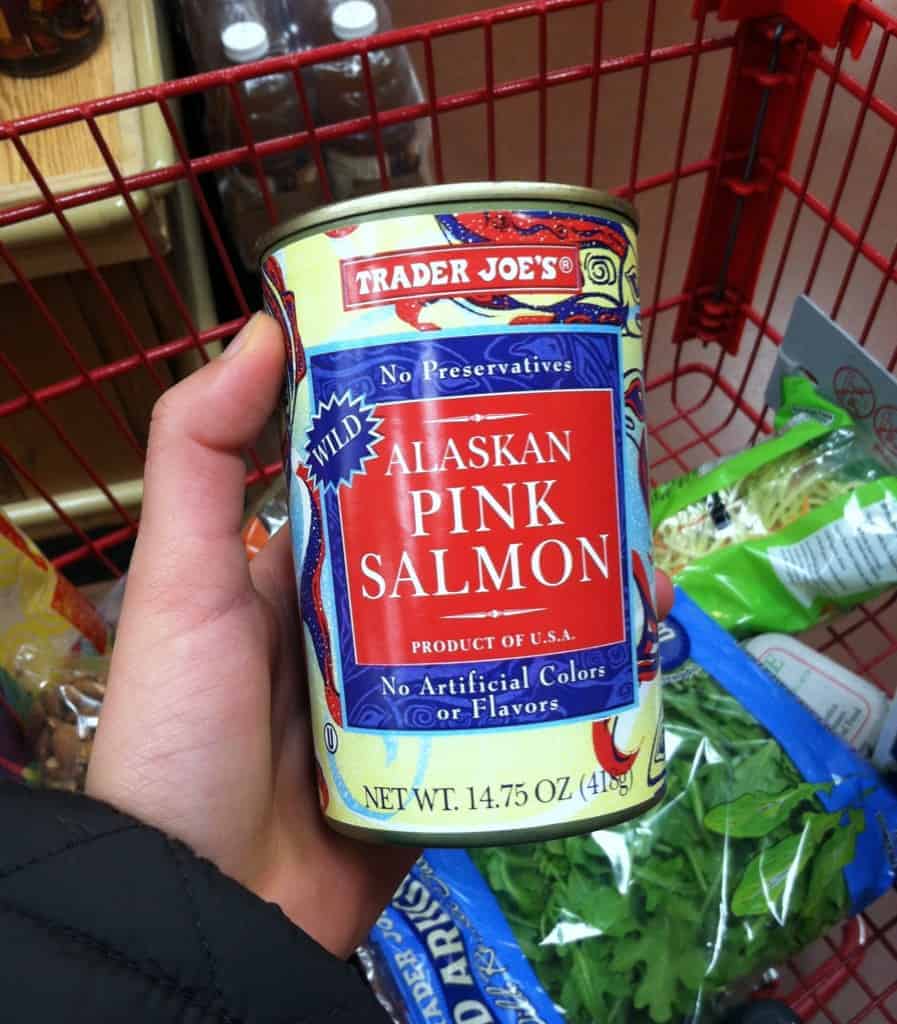 I love that they sell wild canned salmon for less than four bucks. This is my go-to for my goat cheese and spinach salmon burgers, which are on the menu tomorrow night! 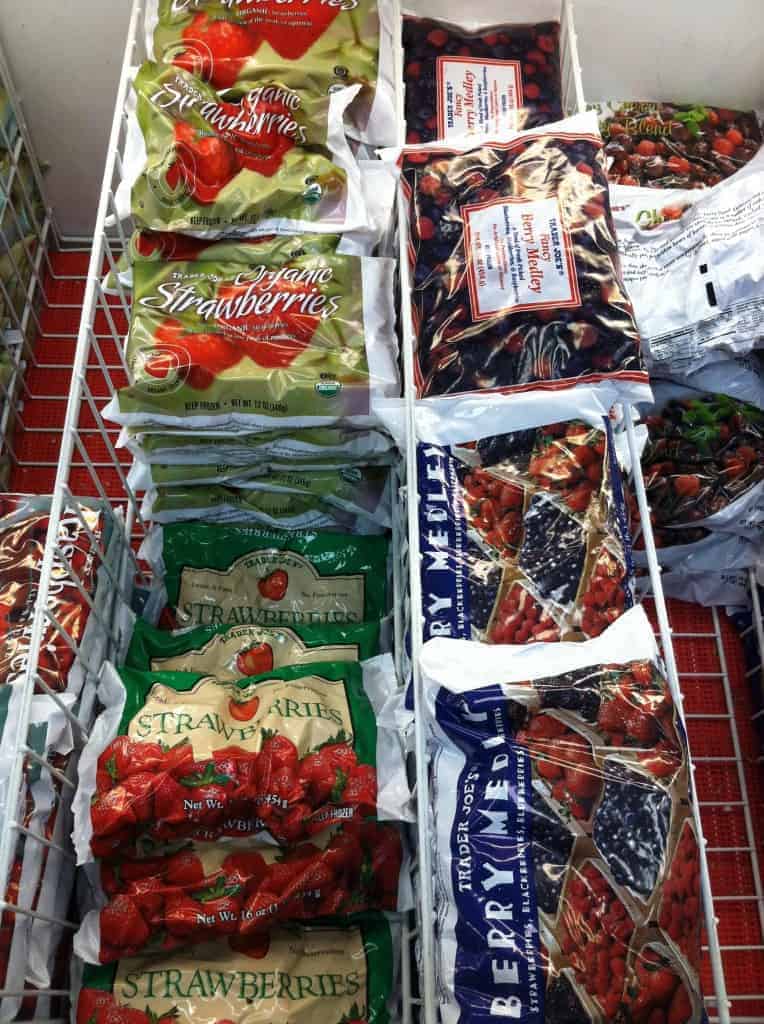 These are essential for smoothies and they're only $2.99. I like that it's all raspberries, blueberries and blackberries and no strawberries. My favorite smoothie combo lately has been frozen berries, frozen banana, chia seeds, spinach, cinnamon and almond milk. #yum 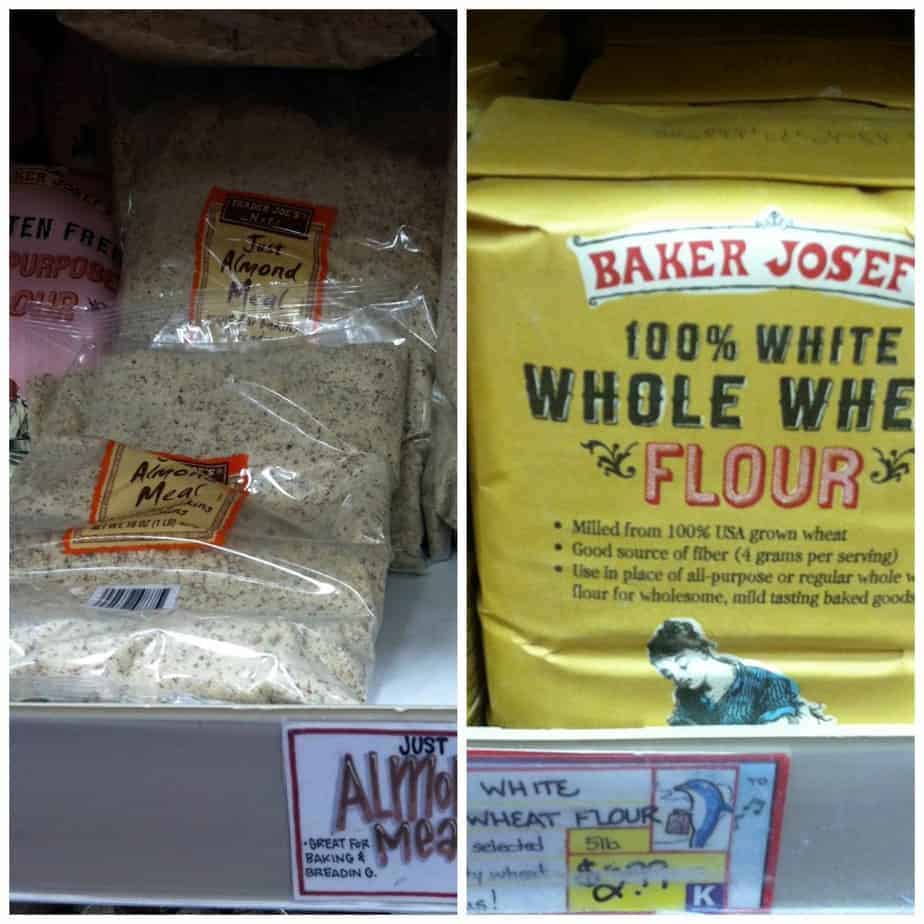 I am head over heels in love with baking with almond meal. Not only does it add the best texture, but it also boosts the protein and fiber content and lowers the carb count. Pretty much all my muffin recipes have it. You won't find it anywhere else for this cheap... it's only $3.99 for 16 oz! I also adore their white whole wheat flour for baking because it's much less dense than regular old whole wheat. 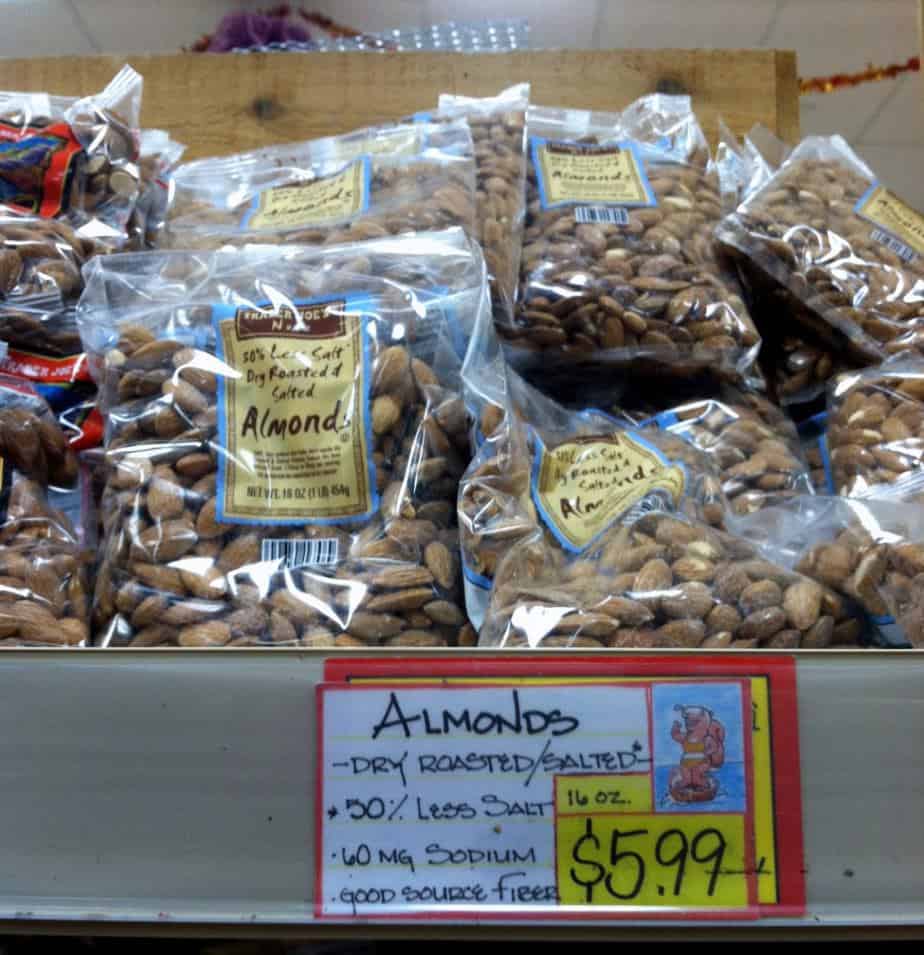 I'm nuts about all the nuts at TJ's, but I especially love the roasted ones with half the sodium. They're only $5.99 for a big bag. Perfect for snacking! 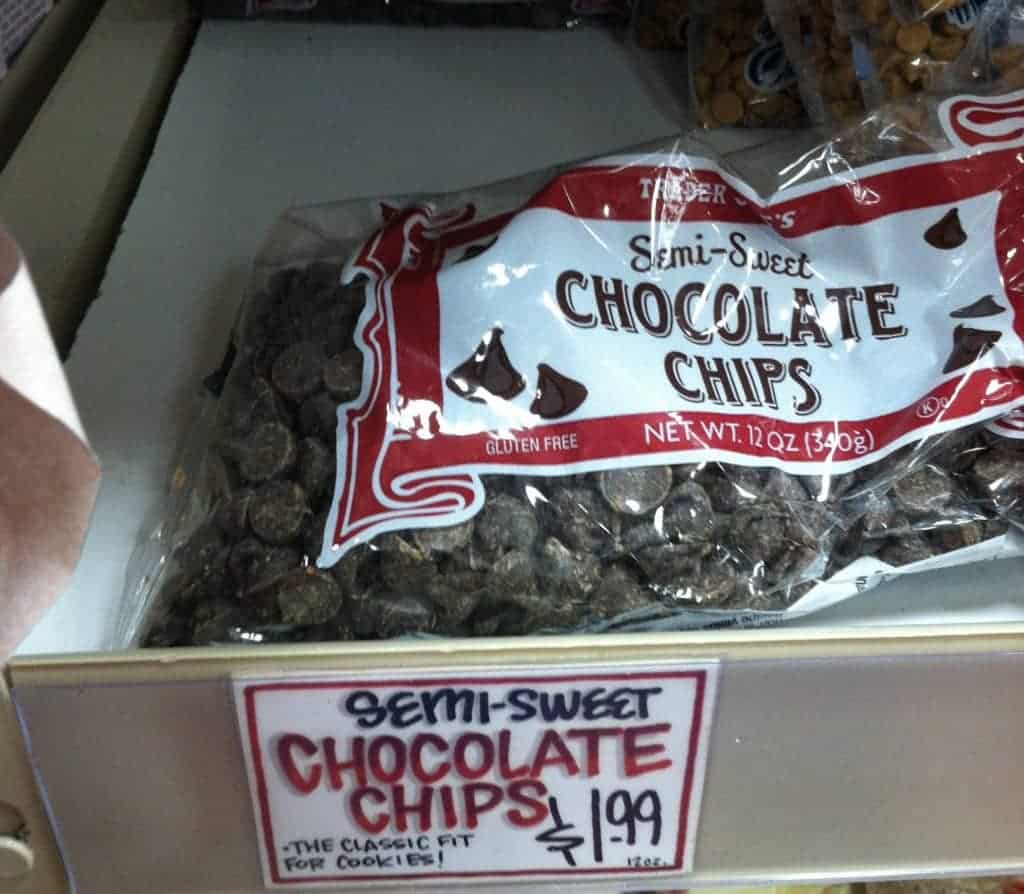 Have you ever seen chocolate chips for $1.99? They have a totally clean ingredient list AND they're vegan! Yep--no milkfat. I'll be darned. 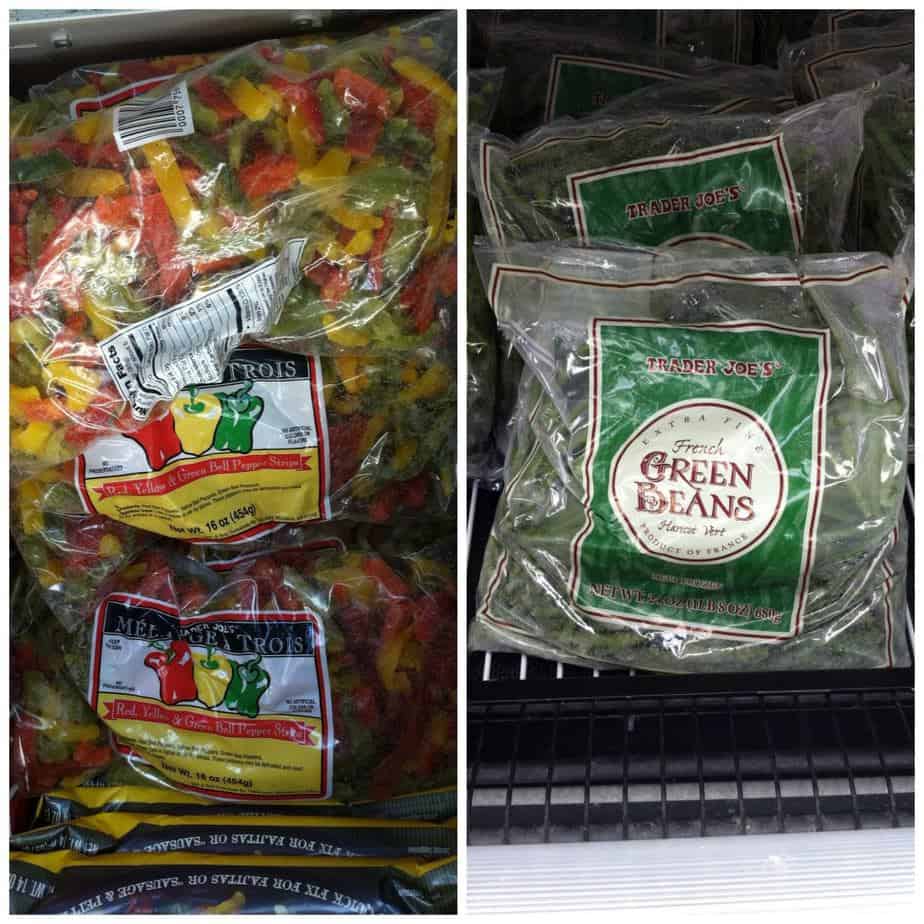 These green beans are my go-to when I need to make a quick veggie to go with a meal. I also love having frozen pepper strips on hand to add to eggs, soups and chili. 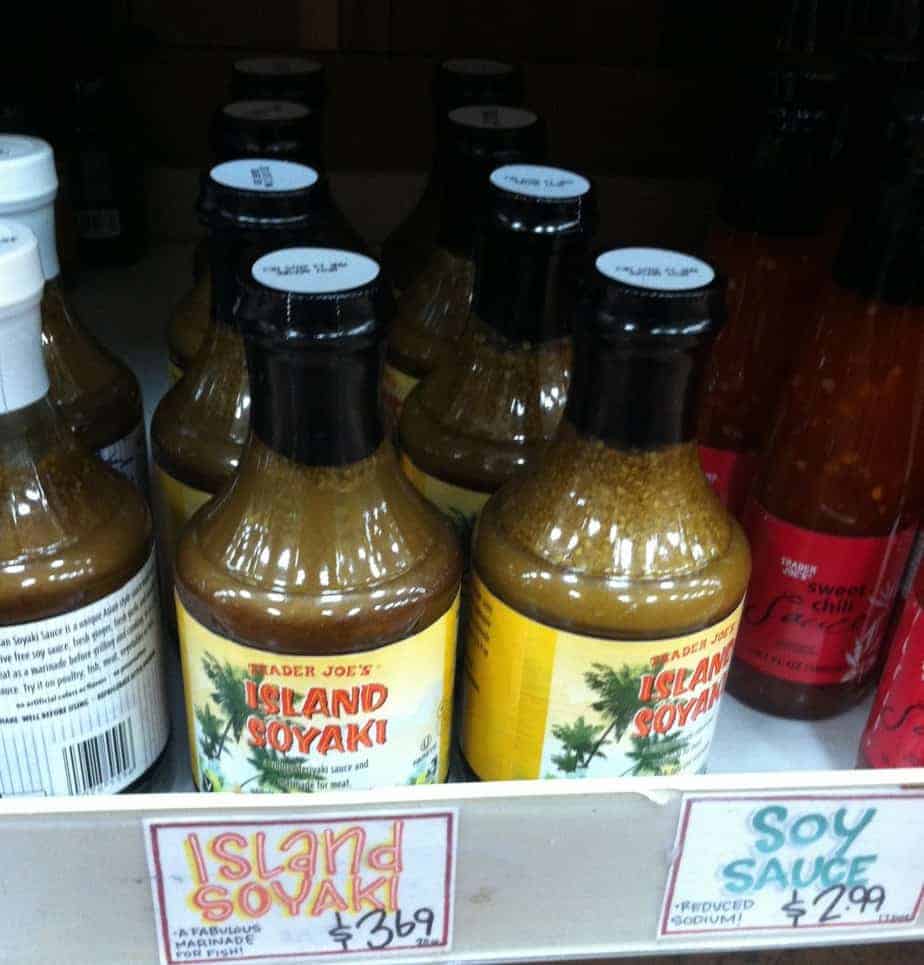 I love this stuff for quick stir fries. It's sweetened with pineapple juice and only has four grams of sugar per serving, which is much less than your standard stir fry sauce. For a quick and yummy meal, I combine it TJ's frozen brown rice (another staple I forgot to mention), frozen pineapple, peas and salmon or tofu!

Are you a TJ's fanatic? What are some of your faves?