I wasn't head over heels in love with scale, but we were definitely in a committed relationship. 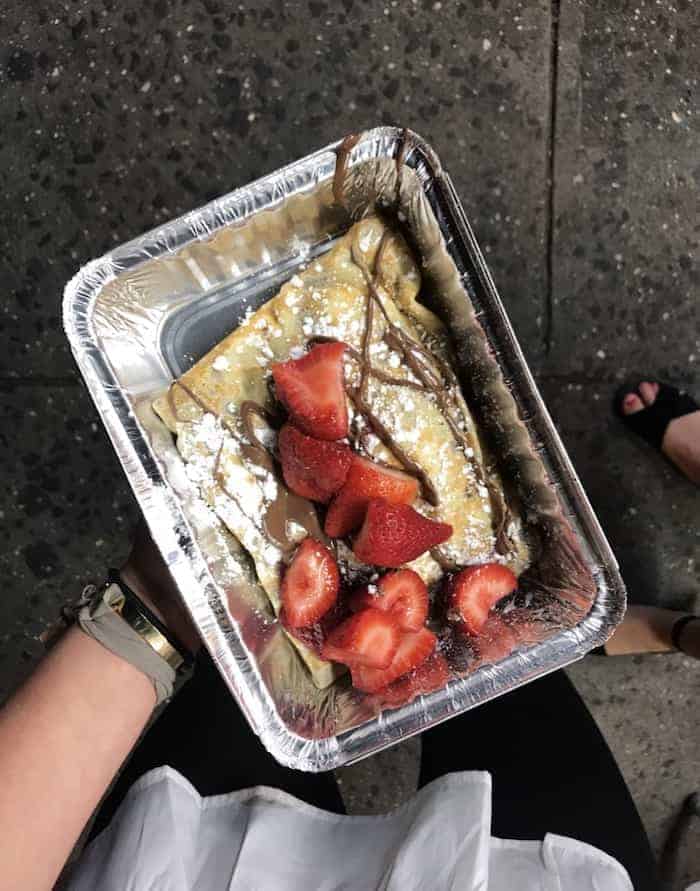 And like any relationship, we had highs and lows. But did we?

Rewind to last year. And most of the years before that. I would weigh myself about once a week or so. Before I stepped on, I'd hope for it to be at (or even better, below) a certain number. If it was, I felt really satisfied. Accomplished. If it wasn't, my stomach would twist into a knot. My self esteem would plummet. I'd tell myself I needed to really "be on it" this week. Try harder. Eat clean and work out more. Get back down to some lower mystery number that had no real meaning but somehow validated me. It made me feel better.

"Better" back then meant smaller. Because they used to mean the same thing to me. Regardless of what was going on in my life and how I felt emotionally, taking up less space made me feel good about myself. In reality, and it's the same for most people, if the number is low, you feel awesome and then you eat more the next week because the scale said you could. If it's high, you eat less. You're basing your eating habits on the digits an inanimate object spits out at you. Be it the pounds you weigh, the calories you eat, the grams of protein in your breakfast, the number of points...basing what you eat on an external factor makes it impossible to eat intuitively. You are consciously choosing to let a number guide you rather than your own intuition.

For me, getting rid of my weekly routine was a big behavior change. It wasn't obsessive, but it was a practice I'd engaged in for as long as I can remember. I even have a memory of seeing a low number on the scale when I had the flu in middle school. I was happy that the flu had taken away my appetite and shed a few pounds. I was probably thirteen years old.

Slowly but surely I turned a corner professionally and personally and traded in clean eating/weight loss counseling for an intuitive eating approach. As I've written about countless times before, it changed my life in almost every way. Being gentler on myself about food made me a more gentle person overall. I started having kinder, more empathetic thoughts about people who I would have judged a year ago. I read The Universe Has Your Back and started getting in touch with my spiritual side, which grounded me and released my anxiety in a way I never imagined possible.

Being kinder and more curious versus judgmental about my body and my thoughts simply overflowed. I had so much new brain space, so much more mental energy. I spent so much time obsessing over healthy food that there simply wasn't much room for that curiosity before. Dieting is rooted in needing a sense of control. Intuitive eating is rooted in finding compassion. That dichotomy was personified in my letting go of the scale. I learned to release my hunger for control and quench it with compassion, to meet myself where I was at, to love myself for every reason other than being a number.

Nourishing your body actually has so little to do with food and so much to do with your mindset, your self esteem, your relationships, your trust in something bigger than yourself, your stressors, your behaviors, your sleep, your habits. All of those things intermingle to determine how we go about nourishing (or not nourishing) our bodies.

It's important to note that a big portion of intuitive eating is gentle nutrition. It's knowing that fueling our bodies with healthy foods will help us live longer, happier, disease-free lives. It's changing the perspective on giving foods human attributes like "good" and "bad." Intuitive eating isn't eating donuts all day because even for the person who loves nothing more than donuts, our bodies will not actually crave donuts all day long. And if you do, it's because you're not letting yourself fully enjoy a donut.

Not weighing yourself religiously (and dieting is indeed like a religion) doesn't mean that weight loss can't be a positive side effect of eating intuitively. Losing weight is never the goal because you can't eat intuitively if you're eating to see a certain number on the scale. Weight loss and intuitive eating are not mutually exclusive. I see plenty of people who are above their set weight due to binge eating, emotional eating, yo yo dieting, etc. Though they certainly exist, rarely do I see overweight people that are suffering from an overall lack of nutrition education. They know kale salad and whole wheat bread are healthy, but they don't know how to stop dieting and restricting. They don't have the tools to form life-long habits for stable health that doesn't rob them of joy.

I have a client who couldn't for the life of her stop weighing herself every day. She couldn't bear the thought of not knowing, of being out of control. I told her over and over again that as long as she was basing success and happiness on the scale, she would never succeed.  It meant she was still choosing dieting over eating intuitively. I told her that it's not up to the scale to dictate how much she weighs. It's not like we don't weigh anything until the scale says so. We know if we've gained or lost weight based on how our clothes fit, based on how we feel. But since in control is such an integral part of dieting, sometimes the thought of not having visual confirmation from an inanimate object like the scale, the Fitbit, or a daily calorie tracker is too much to bear.

It was a back and fourth battle of wanting to not feel the need to weigh herself, but also dying to know what she weighed for the fear of gaining weight. She thought if she didn't weigh herself, she'd certainly gain weight. When she finally accepted that the scale is just an object and not actually dictating her weight or self worth, she stopped. Because ultimately, knowing the number, regardless of whether it was higher or lower than she'd hoped, made her eat based on that number, not her intuition.

Talking to so many other women about the importance of not weighing themselves validated my own personal need to not weigh myself.  Explaining over and over again to those struggling with basing their self worth on the scale that it would never bring them authentic joy was just saying out loud what I myself needed to hear. So I went cold turkey.

I hadn't weighed myself in a couple weeks. I still had the urge to know, but I didn't let myself. Now it's been almost a year. I can confidently say that stepping on the scale sounds foreign now. When I went to the doctor, I thought about them reading my weight out loud and how it would affect me. I kind of didn't want to know. I wanted to continue my quest of not knowing. It was so damn freeing. When they read my weight, it was higher than it used to be. And guess what? I wasn't phased.  Of course it was higher! Did I gain 25 pounds solely from not stepping on the scale? Of course not. I didn't lose control. I felt better than ever. I was choosing life and authentic joy over trying to obsessively control my body size all the time. And it felt so incredibly liberating.

Not weighing myself didn't ever sound like that big of a deal to me, but I've realized it symbolized a lot more than just knowing a number. Letting go of the scale was like lifting a 50 pound weight off me. How ironic is that?