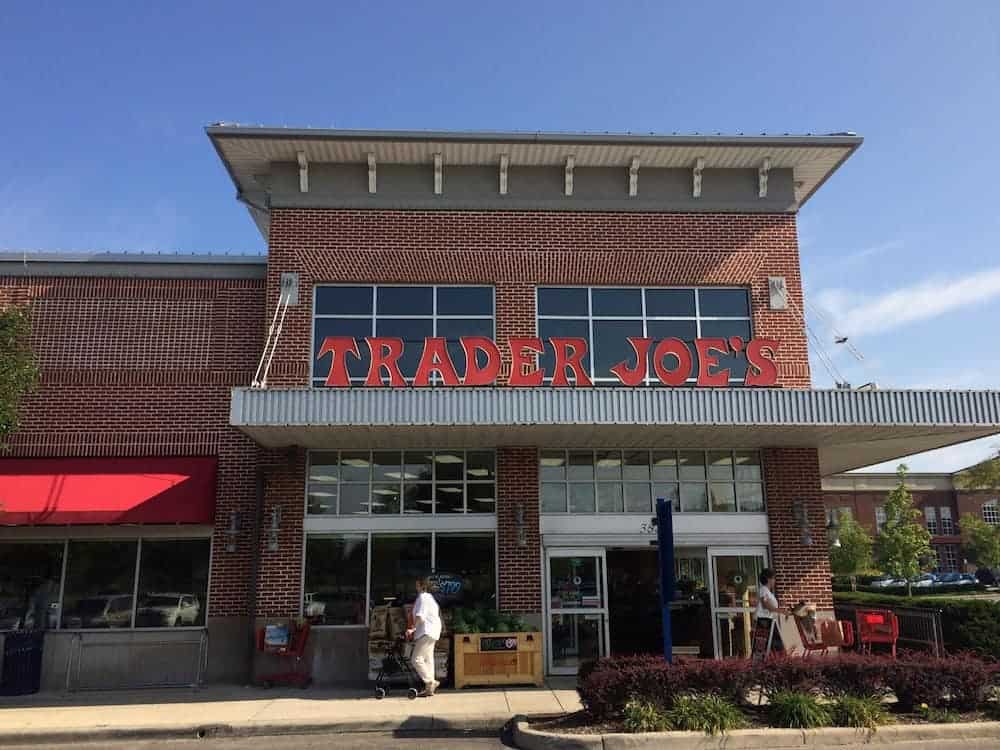 I mean am I the only one who gets totally stoked to see other people's grocery carts?! I'm talking yummalicious grocery carts with fun foodie finds, not the ones filled with sugar-free pudding cups and white bread and enough Cheetos to feed a small army of hyperactive toddlers. Vom. I go to my fair share of grocery stores. It's an activity. I know some people like a one-stop-shop, which I totally understand. It's less of a headache. But I don't think of grocery shopping as a headache. To me, it's a hobby...and one of my all-time favorites!  I get my corn tortillas and Sahara Cuisine hummus and Mary's Gone Crackers pretzels at Whole Foods. I get my almond meal and coconut oil and dates at Trader Joe's. I get Finn crisps and most of my produce at Kroger. And last but not least, I get my huge bottle of Frank's hot sauce and gigantic bag of frozen blueberries at Target. I get asked all the time to share my grocery shopping routine. The truth is that my cart is more often than not filled with tons of fruits and vegetables (spinach, berries, apples, bananas, avocado, onions, sweet potatoes, broccoli, peppers, cucumbers, zucchini, squash, lemons), a few cans of beans, hummus, some kind of whole-grain crackers, almond milk, nut butter and eggs. I keep staples on hand like oats, nuts, quinoa, brown rice, lentils, Amy's burritos, salsa, and frozen fruit and veggies (like edamame) so I can throw something together quickly. 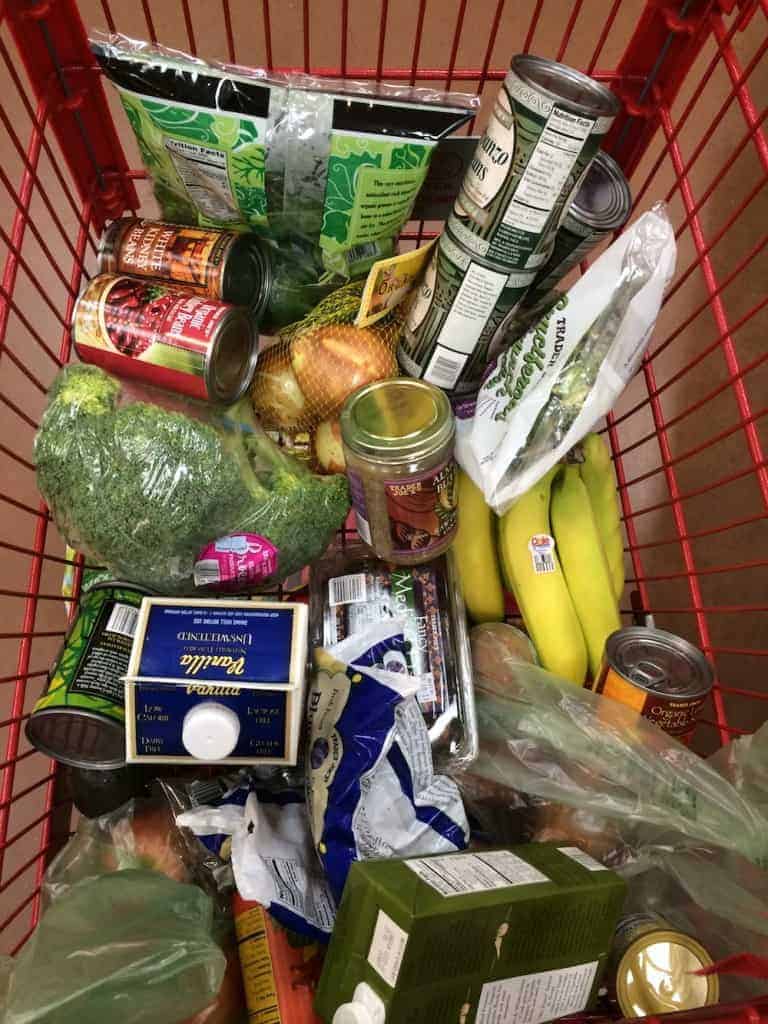 Since produce makes up the bulk of my shopping cart, I'm at Kroger more than I'm at any other store. I find that they have the best deals on produce and I love all of their organic options. And you know how much I love Simple Truth! When I'm not at Kroger, I'm either at TJ's or Whole Foods. I wrote a post last year about my TJ's faves but I thought it needed a bit of an update. If you don't have one near you, I'm so sorry for your loss. The thought of not having my beloved TJ's nearby makes me feel kind of queazy inside. I love Trader Joe's because it's an enjoyable experience, because it's inexpensive, and because the staff is so friendly. Everything is adorabley wrapped and there are always fun new products that are totally up with the times, like coconut flour and cold brew coffee. They're just so with it! I don't love the produce at TJ's because of all the packaging and because it isn't always the best quality, but I often get their bagged spinach and power greens for smoothies since they're pretty cheap. Items I always buy exclusively at TJ's include raw almond butter, coconut oil, dates, and almond meal. The rest are just some other products that I like to throw in the cart from time to time! Without further ado, here are my TJ's must-haves! Ezekiel bread 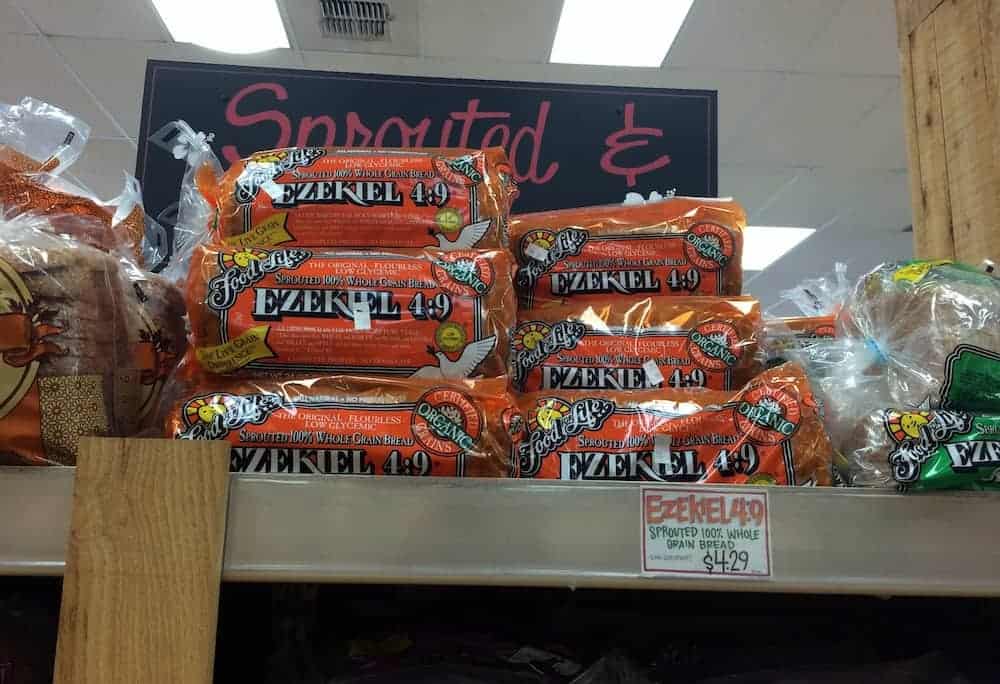 Ezekiel sprouted bread is the only kind of bread I buy. It doesn't have any funky additives or preservatives, so it's usually found frozen in stores like Kroger or Whole Foods. I like buying it at TJ's since it's sold fresh! Of note--it's usually on sale at Kroger for around $3.50. I only eat it toasted, usually with hummus or avocado alongside a smoothie for breakfast. Medjool Dates 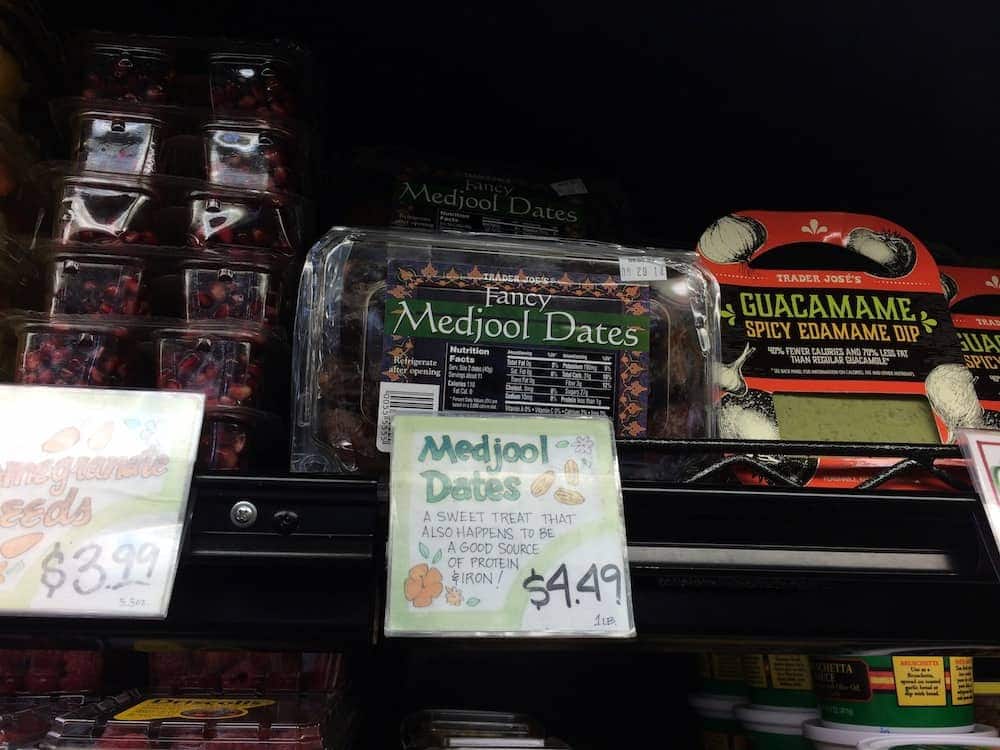 Dates are something I absolutely always have on hand.  TJ's has the best Medjool dates because they're way cheaper than anywhere else I've seen and they're super soft. If I can't get to TJ's I buy them in the bulk bins at Whole Foods. I use one or two to sweeten my smoothies petty much every morning. They're really tasty straight up with almond butter, but I also use them on the reg in no-bake bars and bites. You can find them by the produce in the refrigerated section! Power Greens 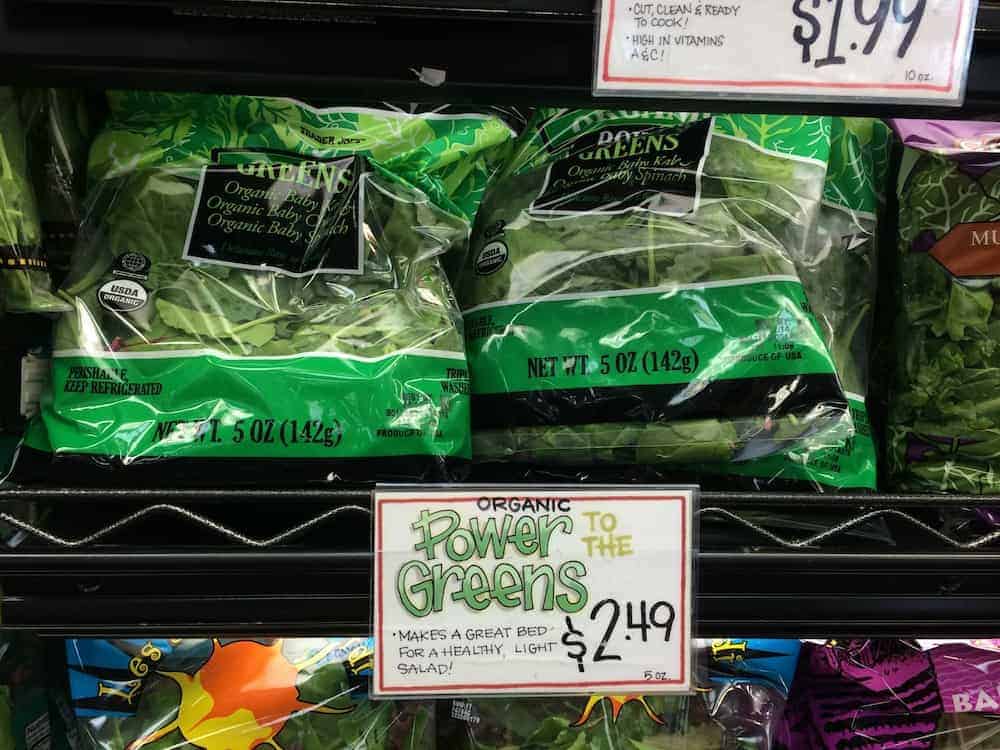 I love this blend for smoothies (like my blueberry cacao power smoothie) because it's the perfect balance between kale and spinach. I personally don't love kale in my smoothies because I find the earthy taste too overpowering, but the spinach and chard in this mix help mellow it out. The nutrition of kale with the mild taste of spinach? I'm in!   Almond Meal 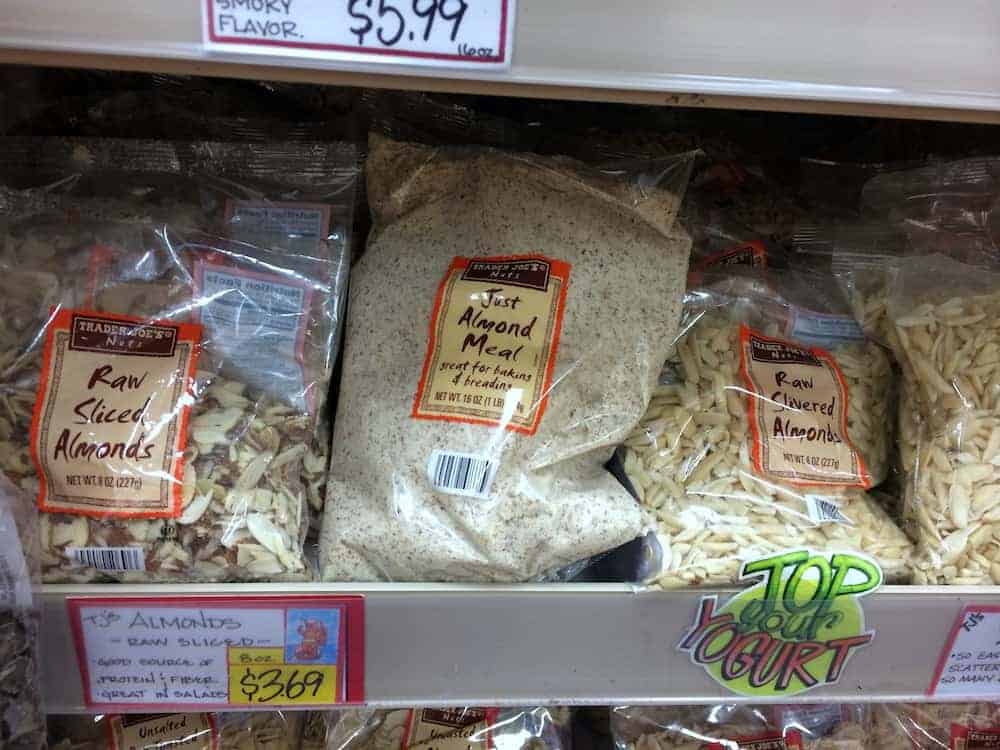 Ohhhh almond meal, how I adore thee. I use it all the time in baking because I find that it adds the best flavor and moistness to the final product. It's higher in healthy fat and lower in carbs than other flours, plus you don't have to add as much oil/butter since almonds are already high in those healthy fats. It's such a win-win situation! You can't beat the price either--only $4.99! It costs twice that at other grocery stores. You'll find it in my blueberry banana hemp muffins, vegan peppermint brownie protein muffins, and my pumpkin quinoa muffins. Raw Almonds 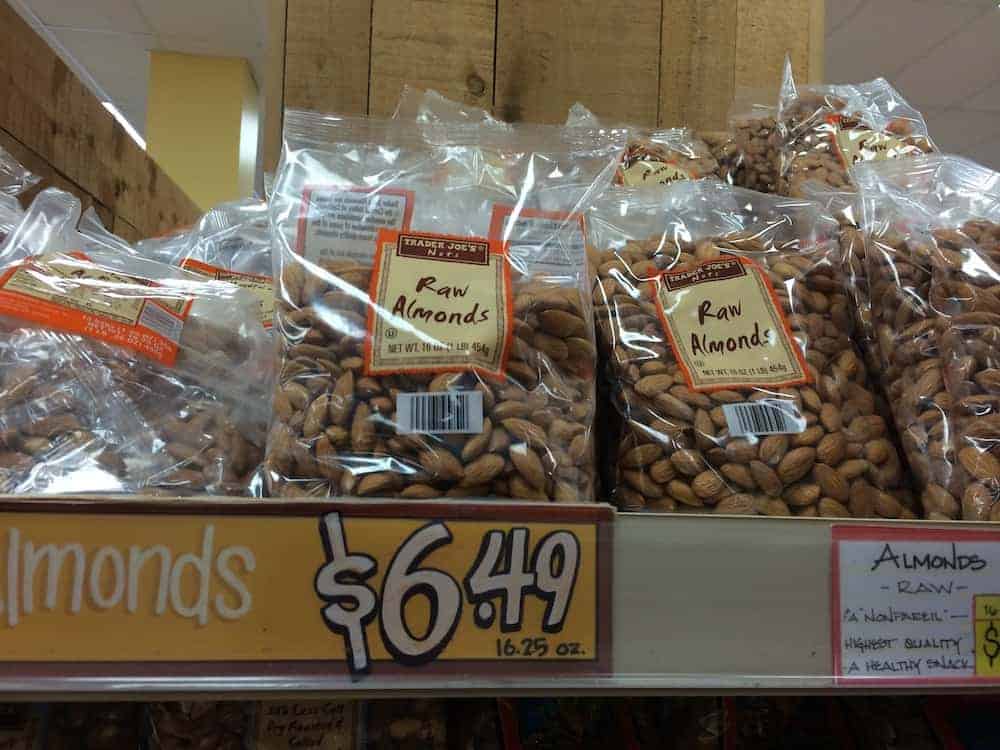 These are just such a steal. I use them in no-bake bites and bars allll the time. I like keeping them in a big mason jar because #lezbehonest, everything looks cuter in a mason jar. Almond Milk 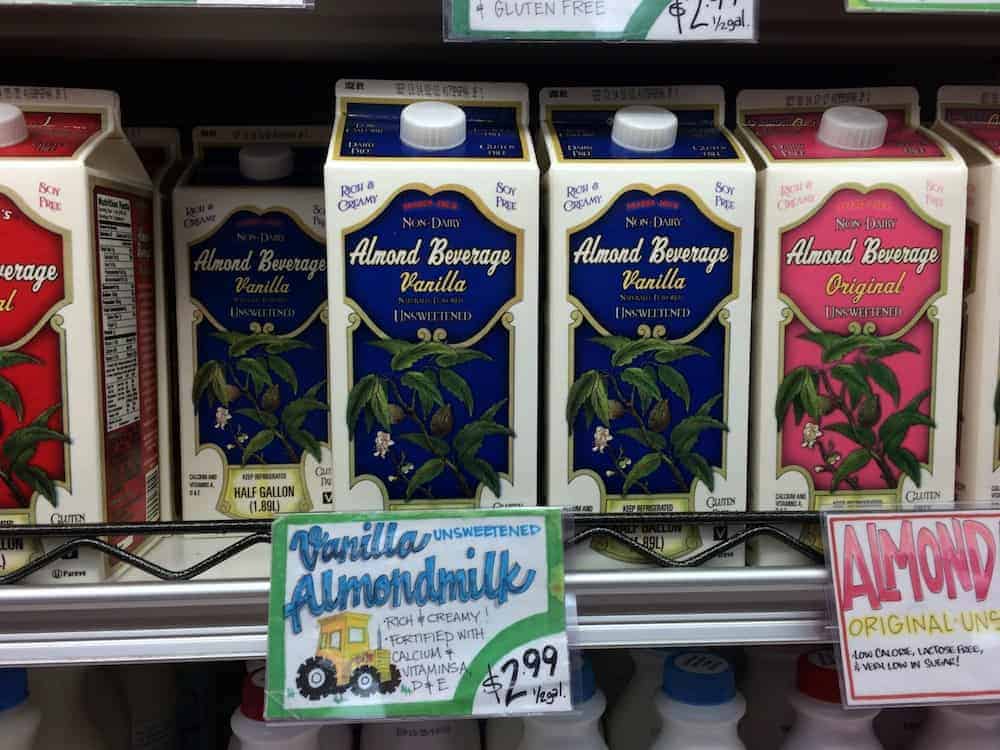 Do we see an almond trend here? Behold the best unsweetened vanilla almond milk ever known to mankind. I don't know how they do it, but it's so freaking dreamy that I legit drink it out of the carton. I pretty much drink a cup every morning in my smoothie and then a couple swigs throughout the day for good measure. Raw Creamy Almond Butter 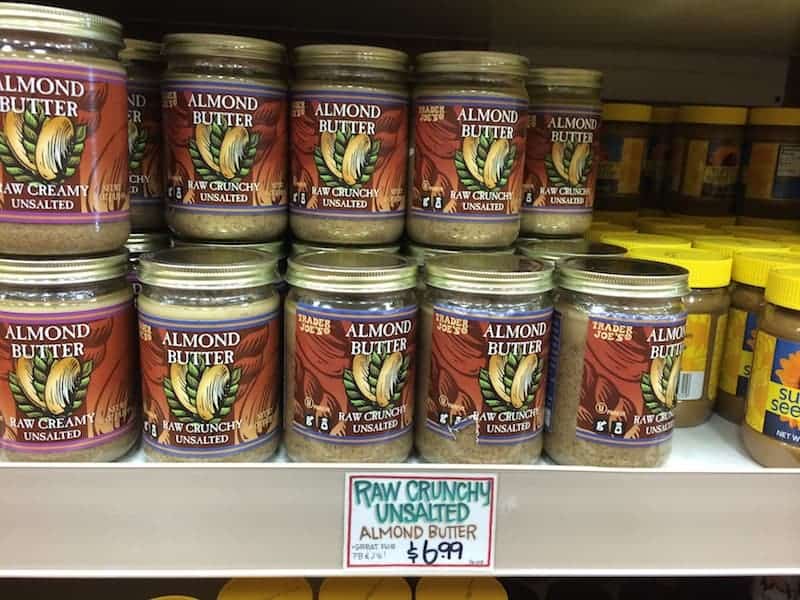 This is another staple in my pantry. Once it gets chilly out, I'll be trading in my smoothies for steel cut oats with almond butter, defrosted frozen berries and chia seeds. Even though the price has gone up lately, it's still the best deal you'll find on raw almond butter. Coconut Oil 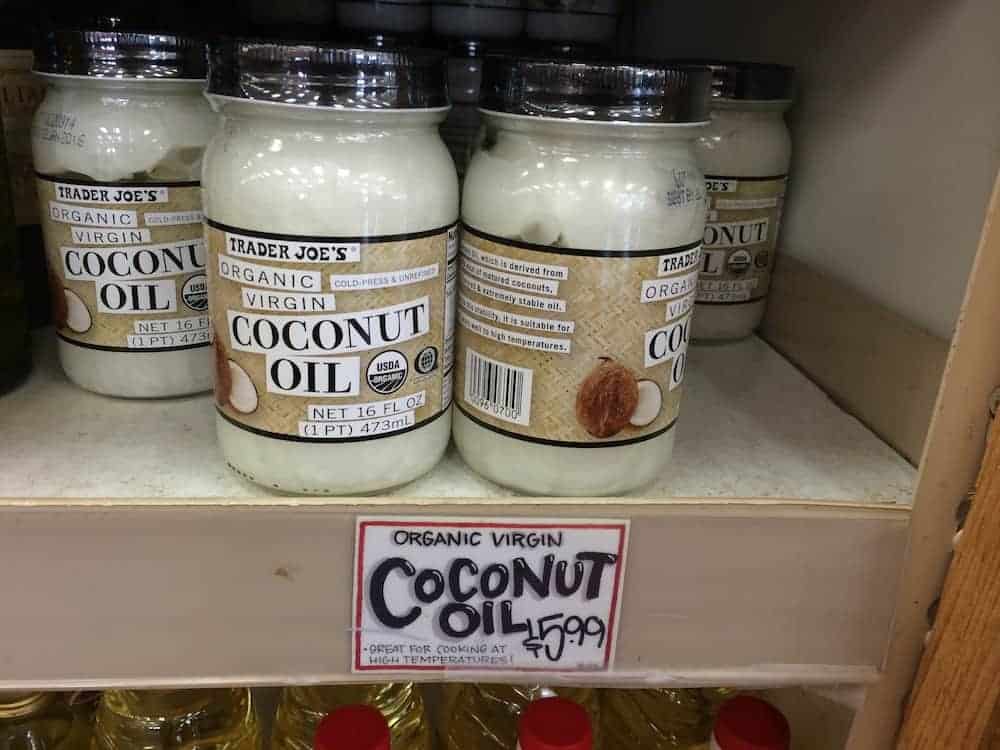 TJ's has by far the cheapest coconut oil around. I use it in pretty much all of my baking recipes. I also use it to pop stove-top popcorn....the best! When it's not in the kitch, it's chilling in my bathroom for when I need a handy dandy makeup remover or moisturizer. Ketchup 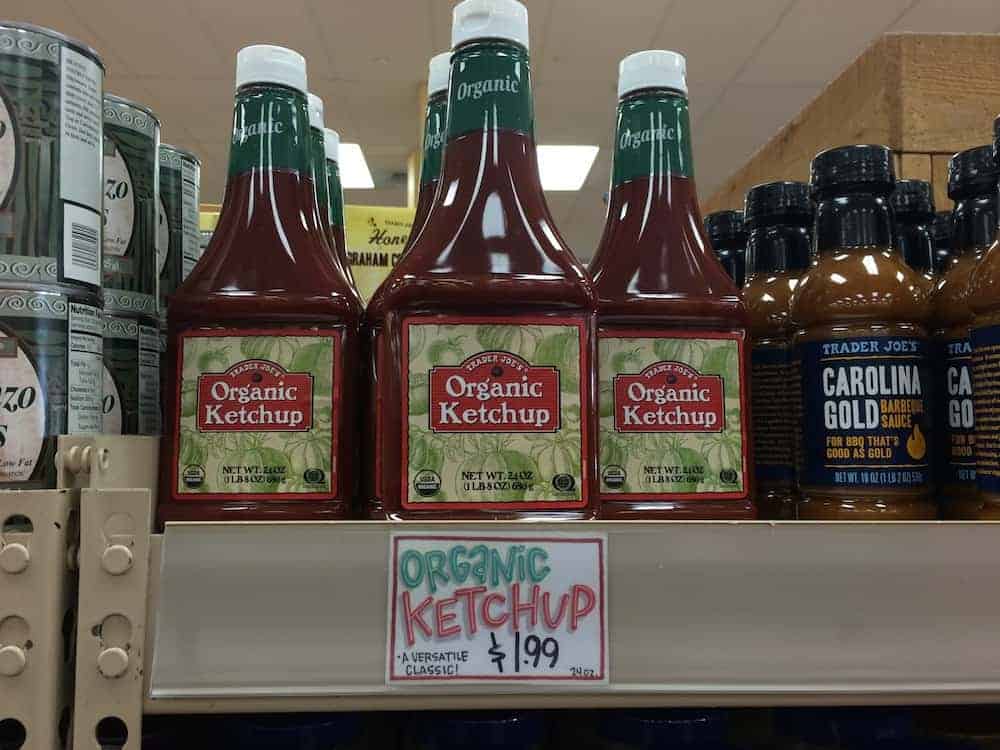 This may seem like a weird one, but I like buying ketchup without high fructose corn syrup and at $1.99, this is the cheapest one around! Plus, it's organic. I use it liberally with baked sweet potato slices (plus mustard). Wild Canned Salmon 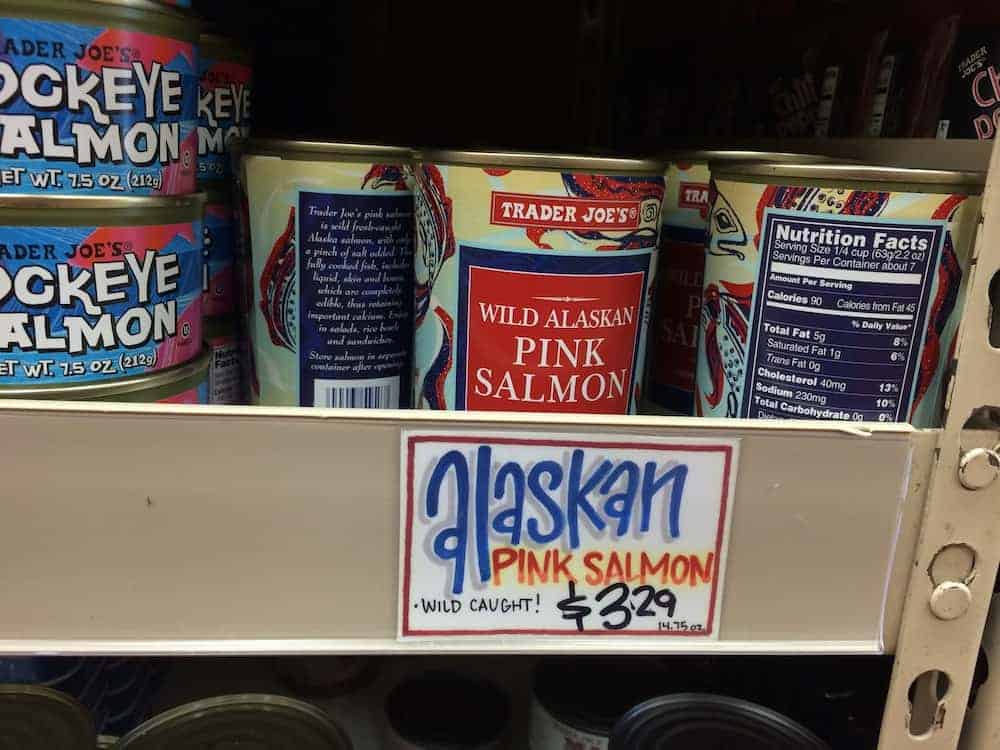 I forgot how much I love salmon burgers! I made a batch this week and I'm obsessed all over again. They come together so quickly, and canned salmon is SO much more affordable than fresh! I nixed the cheese and spinach and added extra fresh lemon juice. It's a great post-workout dinner alongside roasted broccoli (with hummus and hot sauce, obvi) and baked sweet potato slices. NOMNOM! Lentil Vegetable Soup

Have you ever heard that TJ's sells a bunch of Amy's products under a different name? Well, I believe this bad boy is one of them! When I'm feeling lazy and not wanting to cook, I love having this soup on hand for a quick lunch or dinner. It's loaded with fiber and tastes phenom! The split pea one isn't too shabby, either. Spices 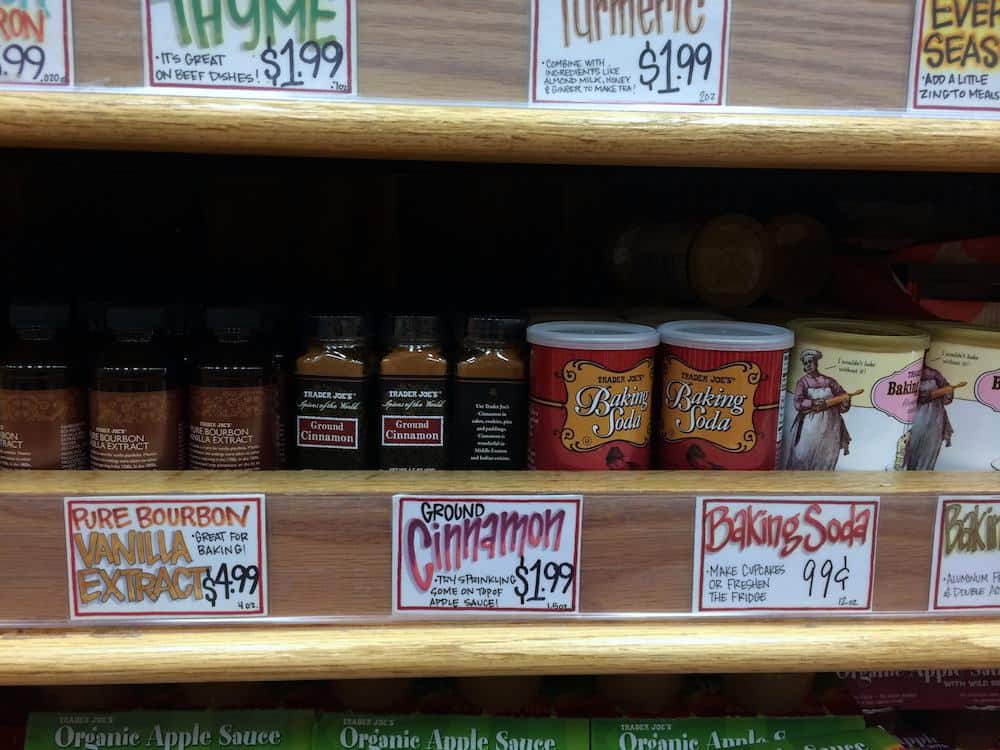 You can't beat the $1.99 spices at TJ's. I also love the bourbon vanilla extract and the aluminum-free baking powder. I pretty much own every spice they offer. (Of note: lately I've been getting the huge organic vanilla extract and saigon cinnamon from Costco...they're so delish and long-lasting that I may be converted). Chocolate Chips 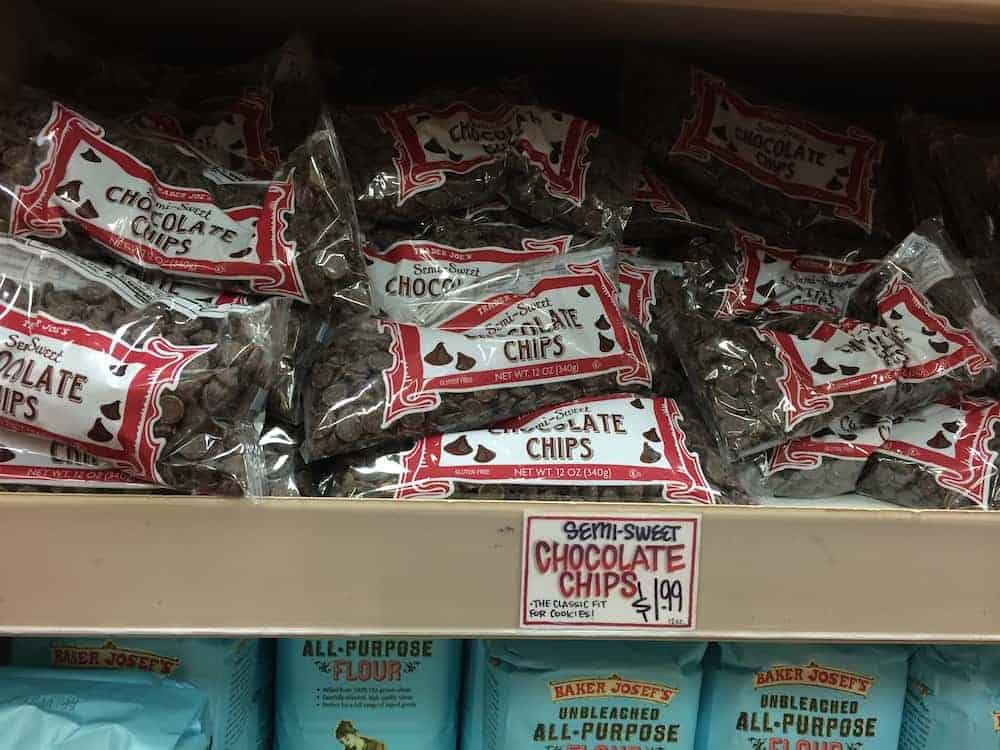 They're $1.99, they're vegan, and they don't have any artificial flavors. Sold! Your turn! What TJ's products are you madly in love with?]]>