Hummusapien » Uncategorized » What I Ate Wednesday: It's Unhealthy to Only Eat Healthy Food

Today I strike for ending age discrimination, misogyny and all forms of bigotry, for reproductive freedom, for national health care for all, and for respect. As a young, outspoken female business owner, I have experienced discrimination based on my age, gender, and appearance more times than I can count. I strike against that being the future for my daughter. 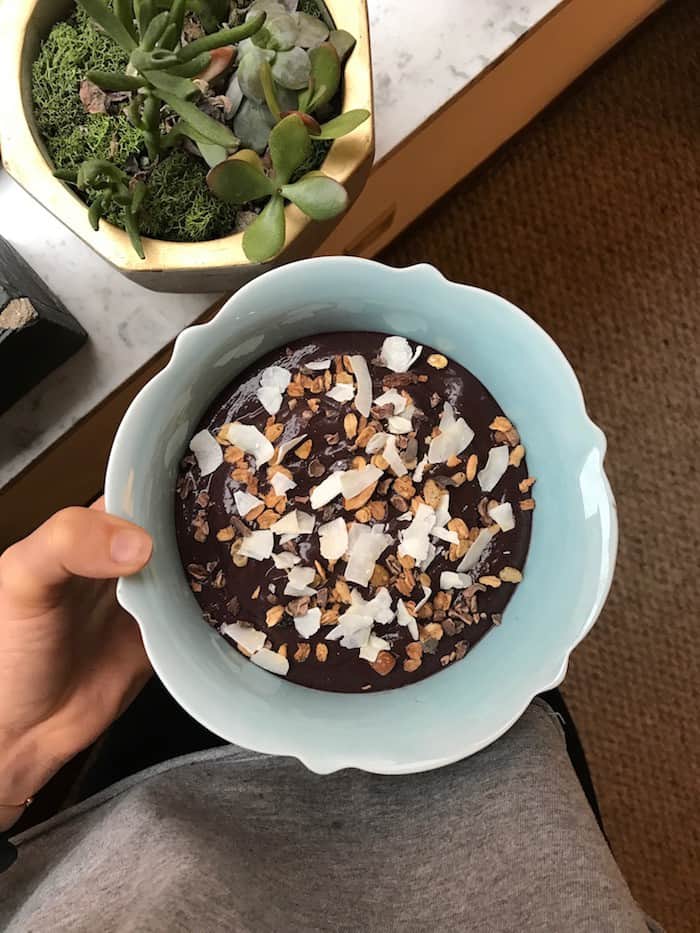 Now I want to talk for a moment about orthorexia, or the obsession with healthy eating, because it's also National Registered Dietitian's Day! I know, sounds serious. And it is. Lately I've been noticing more than ever people's obsession with eating only healthy foods so it's really important to me for you to know that I do not solely eat nutrient-dense, plant-based foods. I recently read a very interesting article (thanks, Emilie!) about how Instagram is linked to symptoms of orthorexia, or the obsession with healthy eating, and I think you all should read it too.

It's no surprise than scrolling through three million roasted veggie bowls with hummus and tofu day in and day out will make you feel like all you should be eating is loaded veggie bowls, too. But guess what? There is so much more to life than golden milk and smoothie bowls and toast covered with berries and almond milk yogurt. I wholeheartedly believe it is unhealthy for your mind, body and soul, to restrict yourself to eating only healthy food. 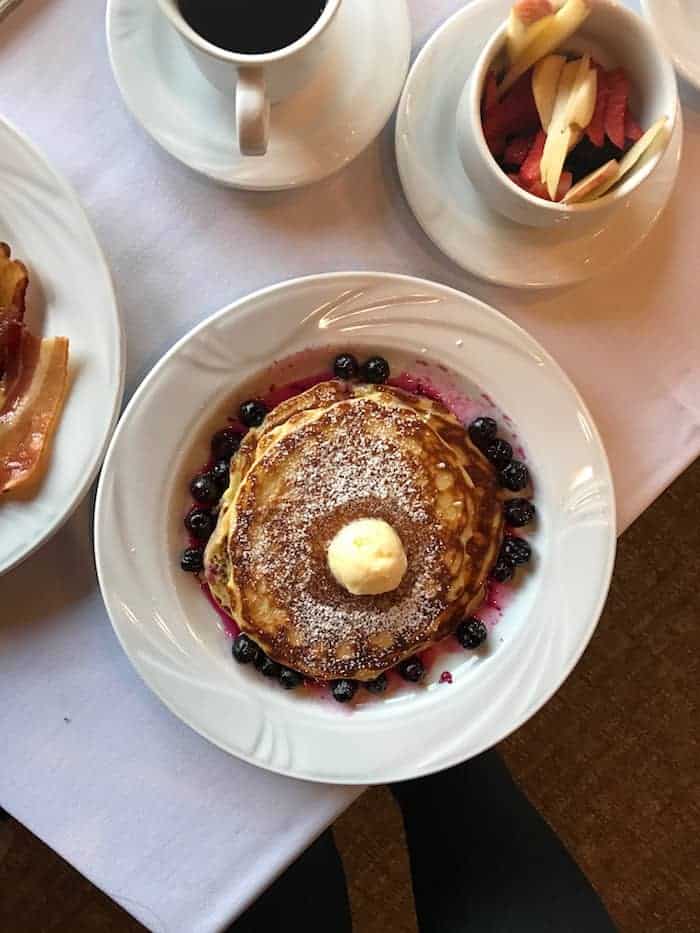 Margarita pizza, all the bread and butter, Oreo covered donuts, cannolis, chocolate chip cookies, and more were all consumed and completely adored by my body over the past couple weeks. They were not plant-based. They were not "healthy." But they tasted spectacular and they soothed my soul. They were healthy for my mind. There is so much more to health than eating fruits and vegetables and if you're sacrificing your sanity or even your social life to avoid eating something that's not paleo or vegan or gluten-free, please re-evaluate your priorities or seek help.

Back to breakfast! I had the most scrumptious lemon blueberry pancakes I've ever had over the weekend at Tarragon when we stayed the night at the cute and cozy Inn at Honey Run. The day before I had pancakes with loads of almond butter, maple syrup, and blueberries. I've also been really into this over-medium eggs + toast + avocado + grapefruit combo but when I woke up I was craving something cold and creamy so a smoothie bowl was what I went with. I don't actually measure anything, but I know you love knowing the ingredients so here we go!

First I blended half a peeled beet with half a zucchini and a cup or so of almond milk in the Nutribullet until smooth (this helps break down the beet). Then I added a freezer smoothie pack that I made the night before that had ⅓ cup of frozen Wild Blueberries and frozen raspberries plus a few frozen cherries (all from Costco). Then I added ¾ cup frozen cauliflower florets, ½ cup frozen spinach, a scoop of Vega protein, 1 teaspoon spirulina, a spoonful of cacao and chia seeds, and a dash of cinnamon. Lastly I added a big spoonful of peanut butter, ¼ an avocado, and a splash of vanilla extract. I topped it with a sprinkle of Cherry Almond Granola, cacao nibs, and coconut flakes. Whew!! 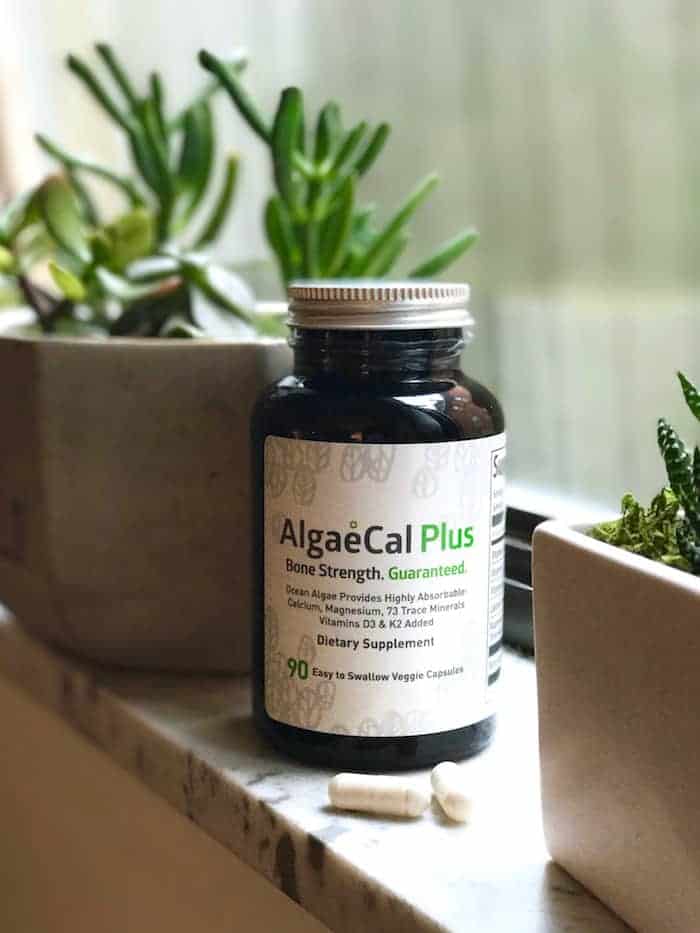 After breakfast I took this lovely calcium supplement that my friends at Algae Cal recently sent me. You know I'm the biggest believer in whole foods nutrition, but we all go through different seasons of life warranting different means of nutrition. This bod can always use a little extra calcium, especially with it being the winter (less Vitamin D) and me following a mostly plant-based diet. I don't talk about supplements often, so when I find one I actually love, I get super excited to talk about it!

Here's the low down. While most calcium supplements are made from laboratory-made calcium carbonate or inorganic rock, AlgaeCal Plus is made from sustainably harvested organic marine algae, which offers 73 trace minerals (most calcium supplements on the market have zero) plus vitamin D3, K2, and strontium. The bottom line is that unlike other brands, AlgaeCal Plus is clinically proven to improve bone growth. You can read more about how it's a step above the rest here. What I love most is that they have several evidence based studies backing up every single health claim they make. I have tons of clients at risk for osteoporosis and osteopenia so reading the different studies gets me super excited. Hooray for science!

Lately for lunches I've been pretty lazy. My go-to has been finely chopping a big head of romaine, red cabbage (sometimes I buy pre-shredded), pepper, and carrot and keeping that separate in the fridge. Then I pack a Tupperware of dressing (like the one from this Crunchy Thai Salad) and top everything with roasted chickpeas, a bean burger, and hummus. 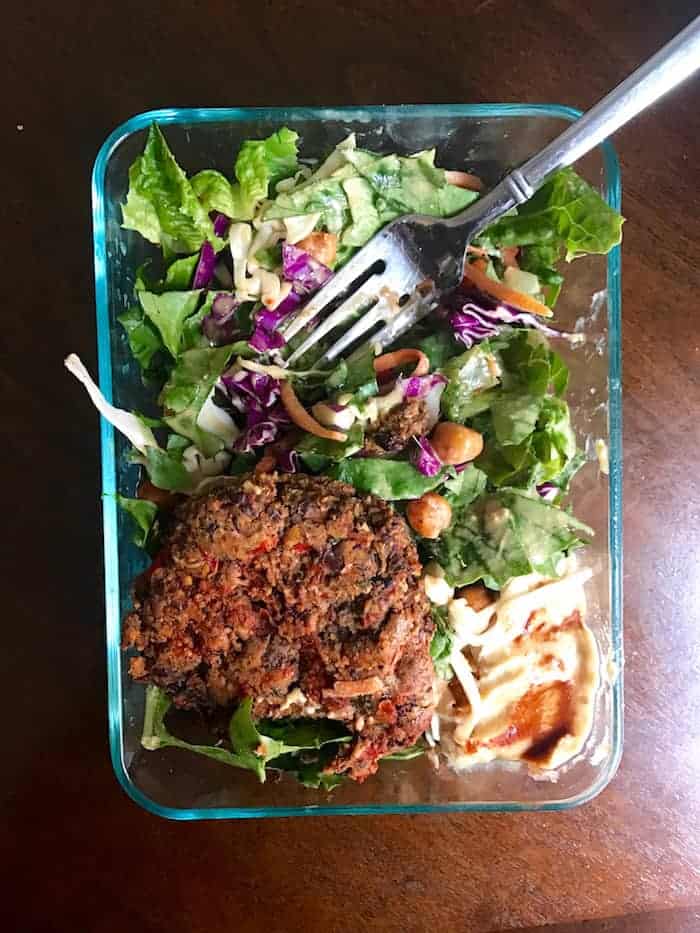 On the side I had a One Bowl Chocolate Banana Muffin, a Carrot Cake Protein Bar (err, ball), an un-pictured sliced apple with cinnamon. 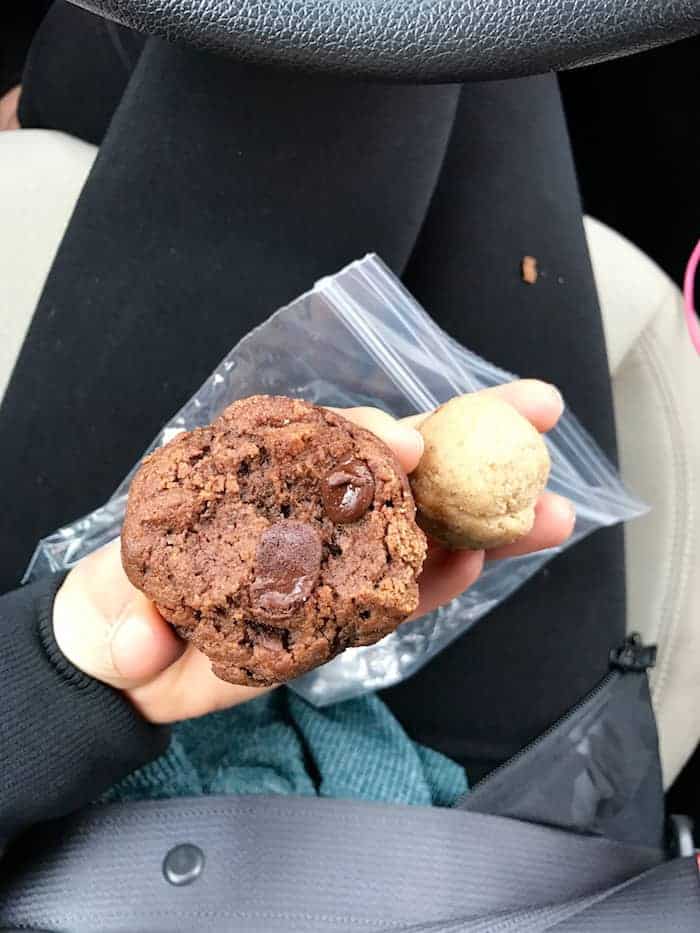 Later I munched on a handful of Made in Nature's Pomegranate Ginger Nut Fusion which is like the best snack in all of the land. Highly recommend! 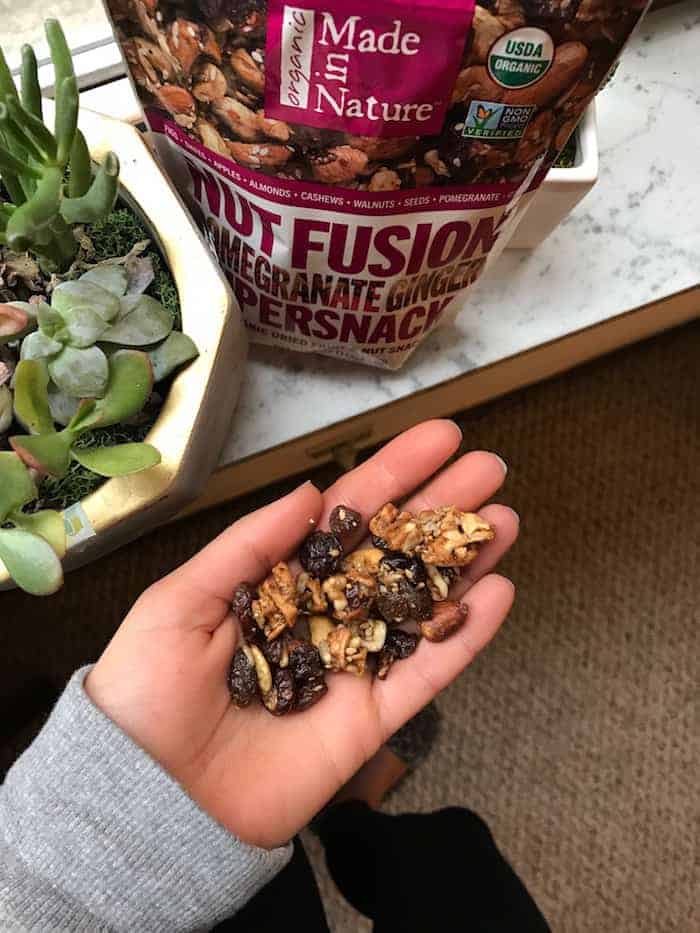 While I finished up some work I sipped on turmeric mylk made with a heaping cup of almond milk, ½ teaspoon each of turmeric and cinnamon, a pinch of ginger and black pepper, and a squirt of raw honey. Stir, heat, and sip! 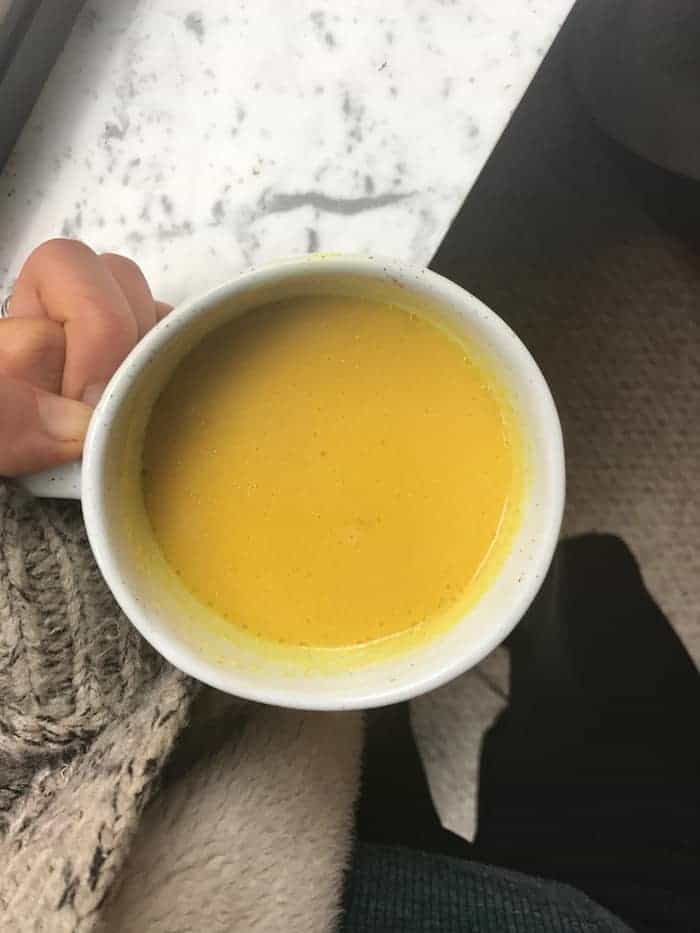 I was hangry before dinner when I got back home so I noshed on roasted sweet potatoes dipped in hummus which is actually a fabulous combination. 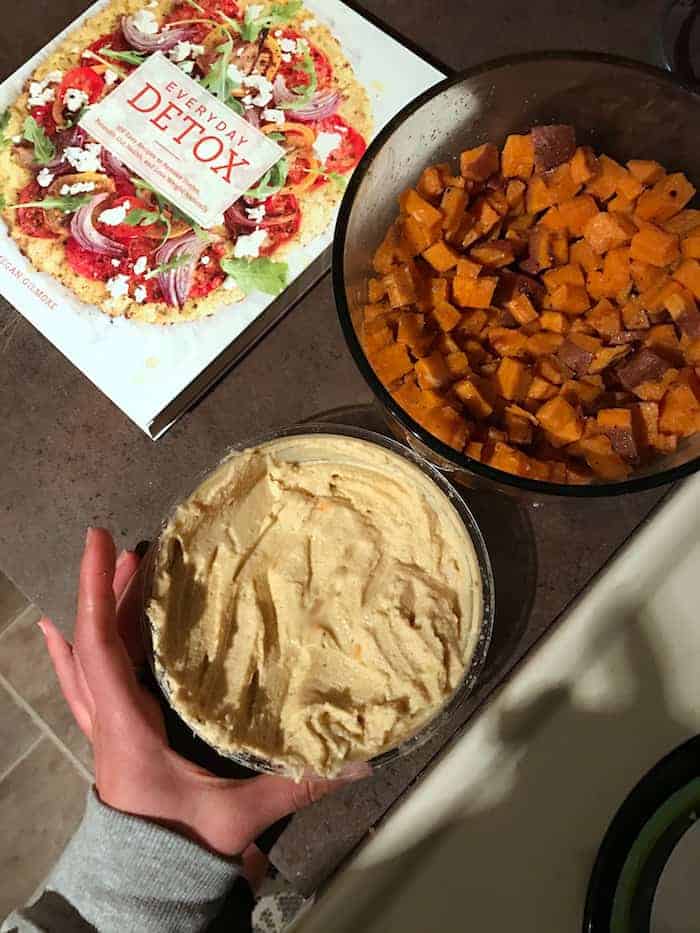 Dinner was a big batch of the best lasagna ever (Costco's organic marinara is the bomb) sans the peas with a big salad. Each week I blend together equal parts extra virgin olive oil (probably half a cup), balsamic vinegar, a splash of water, a couple garlic cloves and a squirt of dijon for salads at night. Topping usually include organic roma tomatoes (cheaper than the other kinds), cucumber, carrots, and pepper. I never used to have salad every night but my boyfriend loves it so now we make it without question! It's interesting how behavioral eating really can be. 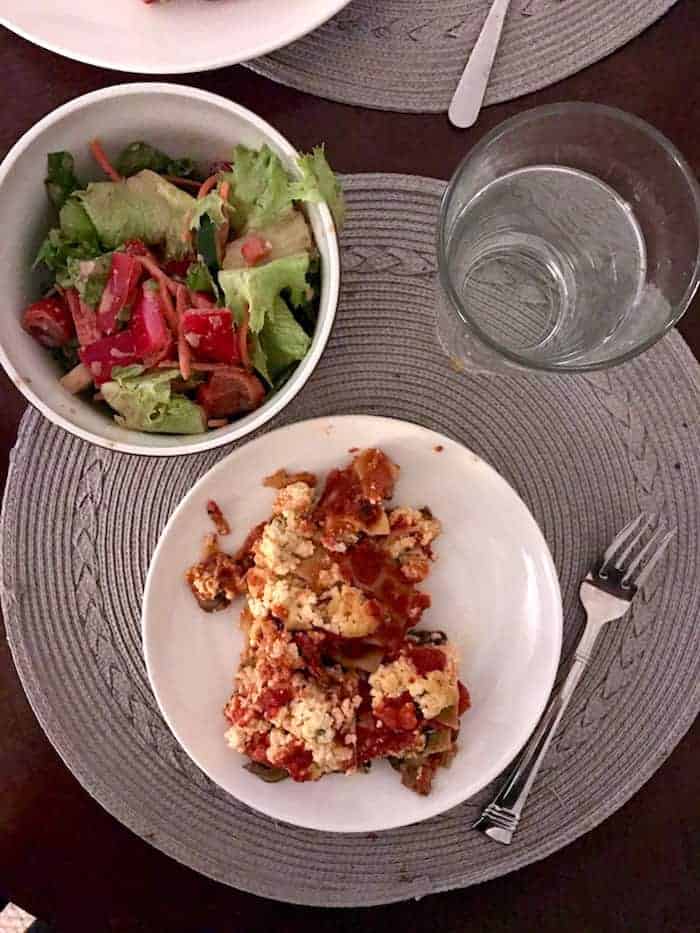 I also ate a shiz ton of Salt and Vinegar roasted Brussels Sprouts from Everyday Detox that I had been meaning to make for a while. Basically I tossed 1 ½ pounds of sliced sprouts with 3 tbsp melted coconut oil, 1 ½ tbsp apple cider vinegar, a heaping ½ tsp salt, and plenty of pepper than baked at 350F for about 28 minutes. So easy and delish! 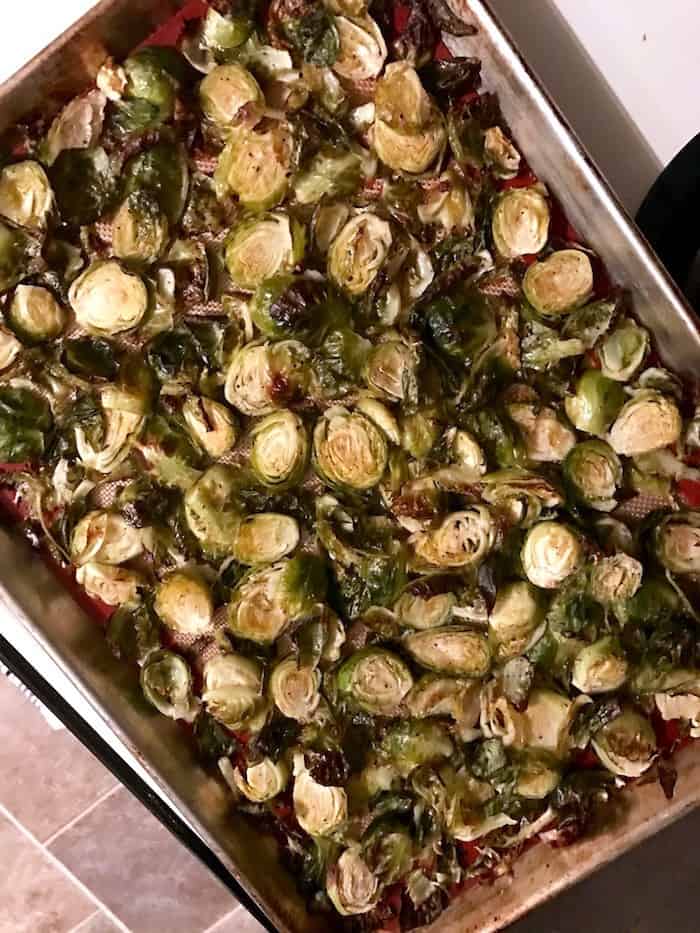 Dessert was one of these amazing bakery-style chocolate chip cookies with Nada Moo's new "Rockiest Road" dairy-free ice cream. Sooooo good. I had tons of leftover almond flour to use up so these were perfection! 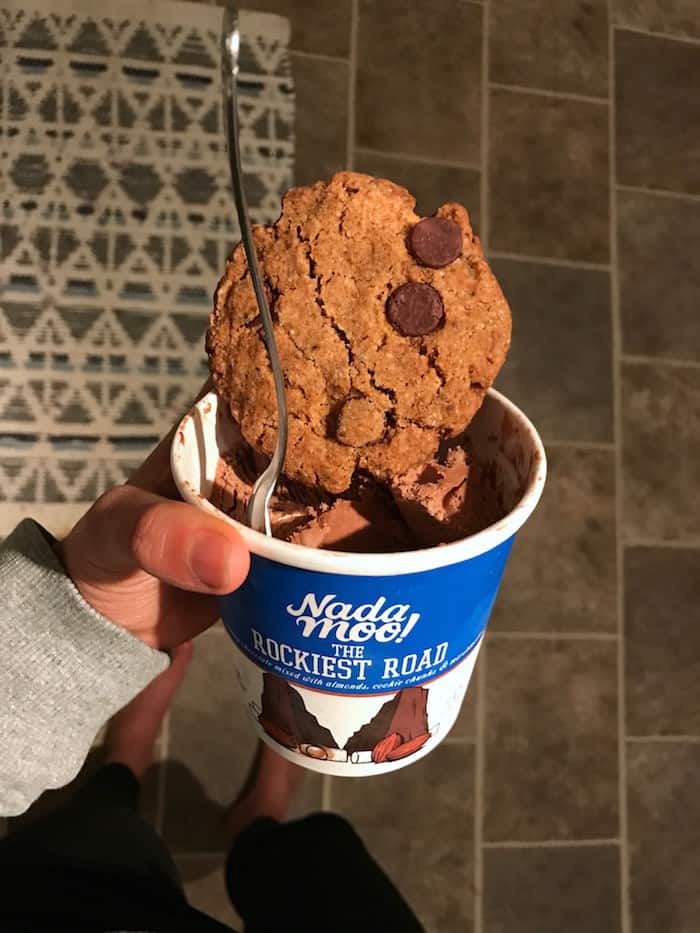 One last thing! I mentioned the 3-Day RD Workshop in my last What I Ate Wednesday post but I wanted to let you know that registration opens today! Regarding pricing, it's $199 for the first 15 people that sign up, then for 24 hours it'll be $249. After that it will go up to $299. The workshop features five awesome dietitians who will teach you how to stand out in this crowded field and how to convert clients. You'll also get CPEU credits for the workshop. Pretty awesome. Now go sign up!