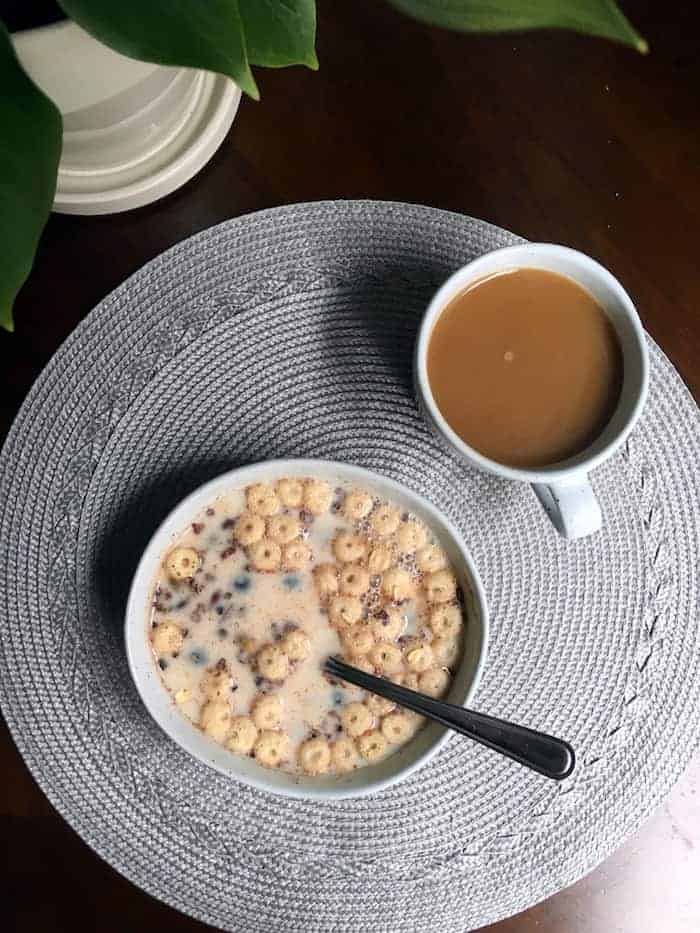 I'm not at all excited for the weekend. Nope. I only start thinking about it oh, say, on Sunday at 8:37pm. It's fine.

If you follow me on Snapchat (or should I say Instagram stories?), you know that breakfast has been the same thang---DIY oatmeal cereal! I saw on Instagram that it inspired some of you to make it yourself which was so dreamy to see. Be sure to tag me @hummuspaien and use #hummusapien so I see all your gorgeous eats!

Into the bowl went ½ cup uncooked old-fashioned oats, a handful of Power O's, a sprinkle of ground flax, cacao nibs, and pepitas (sometime walnuts), lots of cinnamon, a Medjool date chopped into tiny pieces (so great for natural sweetness), a handful of fresh bloobs, and lots of unsweetened vanilla almond milk. Dreamy!

I also had coffee with almond milk per uge.

A couple hours  later I grabbed a cold brew with a splash of soy milk on my way out the door at Alchemy because I knew it would be a late lunch and I felt that a pick-me-up was necessary. 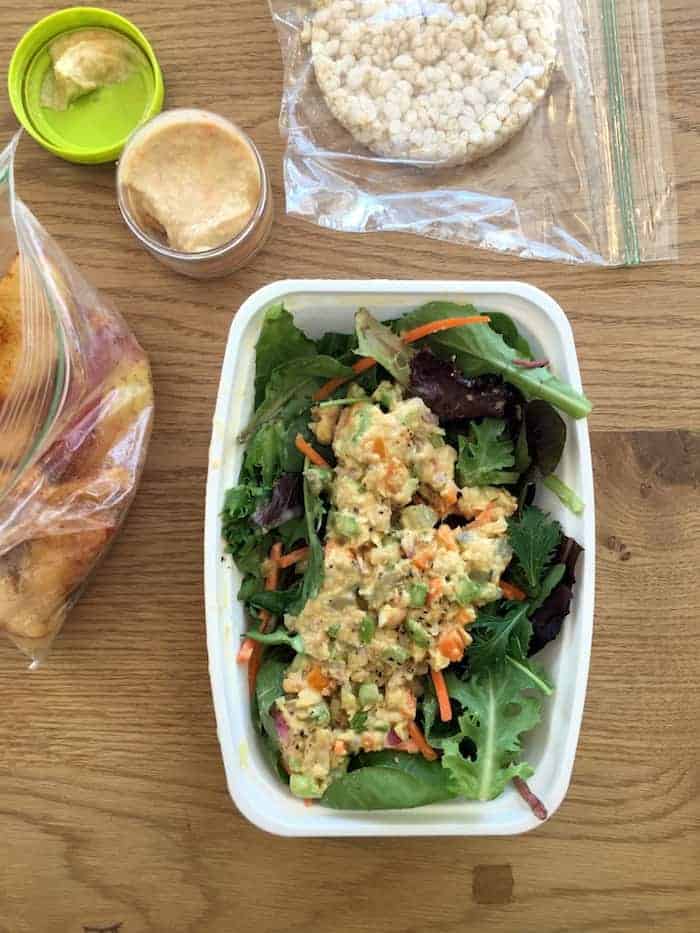 I was ready to eat both elbows by the time I was able to sit down and eat lunch. I prepped Angela's Perfected Chickpea Salad from her cookbook over the weekend to have as simple lunches. I followed the recipe pretty much to a tee except that I didn't have dill and I added chopped bell pepper and red onion instead of green. On Sunday I ate it on bread with avocado which was clearly a dream, but for work week lunches I packed it over organic mixed greens (the huge tub was on sale at Kroger for $3.99 hay!) with shredded carrots. 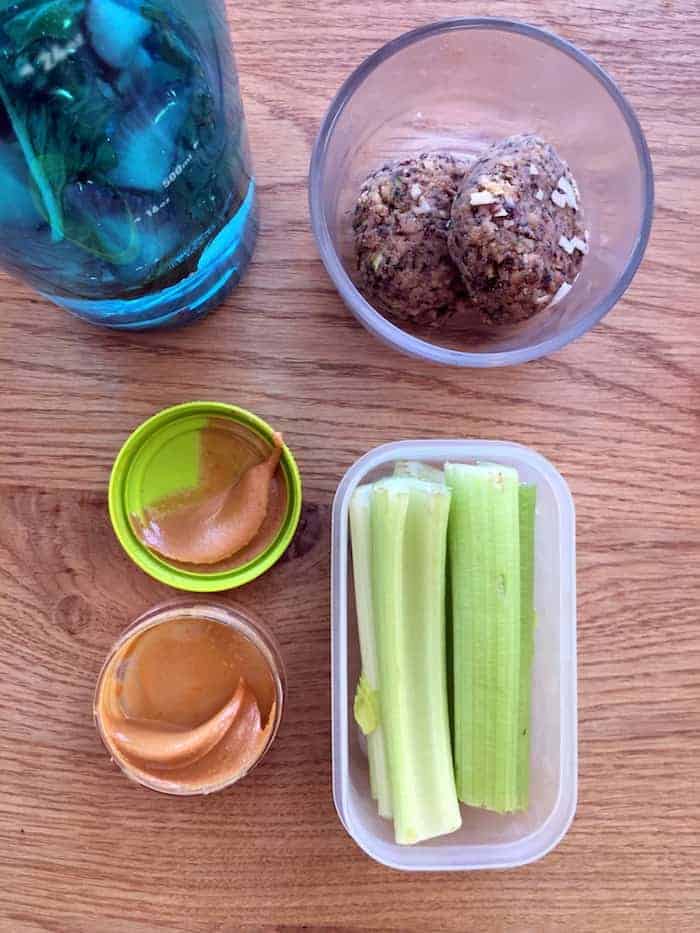 I also had a big organic apple with cinnamon (I slice it in the morning before I leave for simple snacking), two Morning Glory Breakfast Cookies, celery and peanut butter, and hummus with brown rice cakes.

Post Body Pump at The Fitness Loft involved plenty of Vegan Buffalo Cauliflower Dip with black bean Beanitos chips as an appetizer followed by a huge salad and amazingly creamy curry also from the Oh She Glows Cookbook. I added cubed tofu that I seasoned and baked in the oven at 350F for half an hour. I highly recommend this recipe! I'll be reviewing her second cookbook soon and I can't freaking wait to get my hands on it. 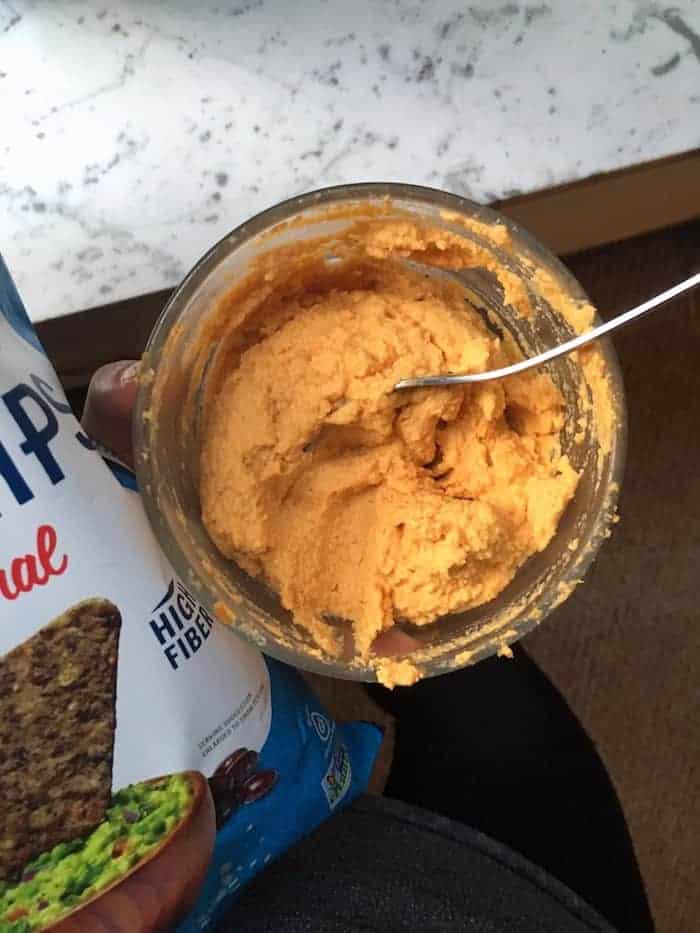 The boyf and I are in this awesome salad routine, mainly because he loves salad so I'm always inclined to make it for us. Each week we buy either a big tub of mixed greens of a big head of lettuce, a bag of pre-shredded carrots, a few organic Roma tomatoes, a few bell peppers (we always get them in the sale section three for a a dollar), a cucumber, and an avocado.

Then each night we throw all the chopped ingredients in a big mixing bowl and toss with a good drizzle of balsamic vinegar (I always buy Pompein because the only ingredient is balsamic vinegar, it has no sulfates, and it's super affordable), extra virgin olive oil, sea salt, lots of pepper, and oregano. 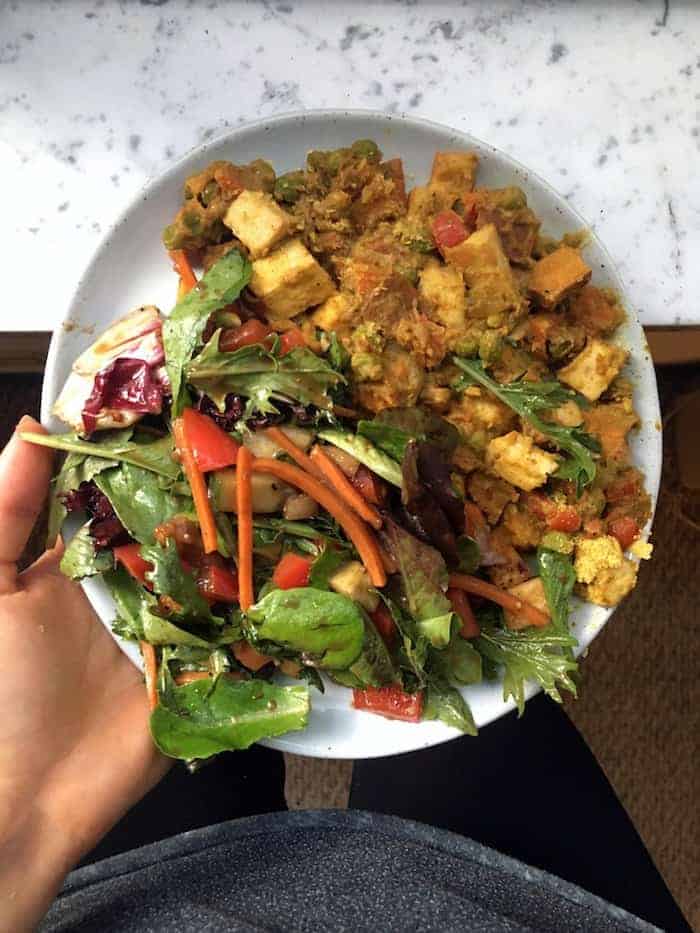 It's so fresh and we really don't get sick of it. I swear once you get in the routine it will become a habit and there ya go, immediate increase in veggie intake!

Dessert was a couple of my girl Sarah's Double Chocolate Peanut Butter Cookies with lots of almond milk. They're made with oat flour, a bit of coconut oil, and coconut sugar so basically they're like the perfect healthy treat.

We're in this thing where we watch the Olympics and eat cookies every night like ten minutes after dinner. I freaking love it.