Omigosh I had the best ice cream last night. Total foodgasm. Total drool everywhere. Guess you'll just have to read a full day of eats to find out what it is, yo! P.S. if you follow me on Instagram, you probs already saw half of these eats. Oopsie! 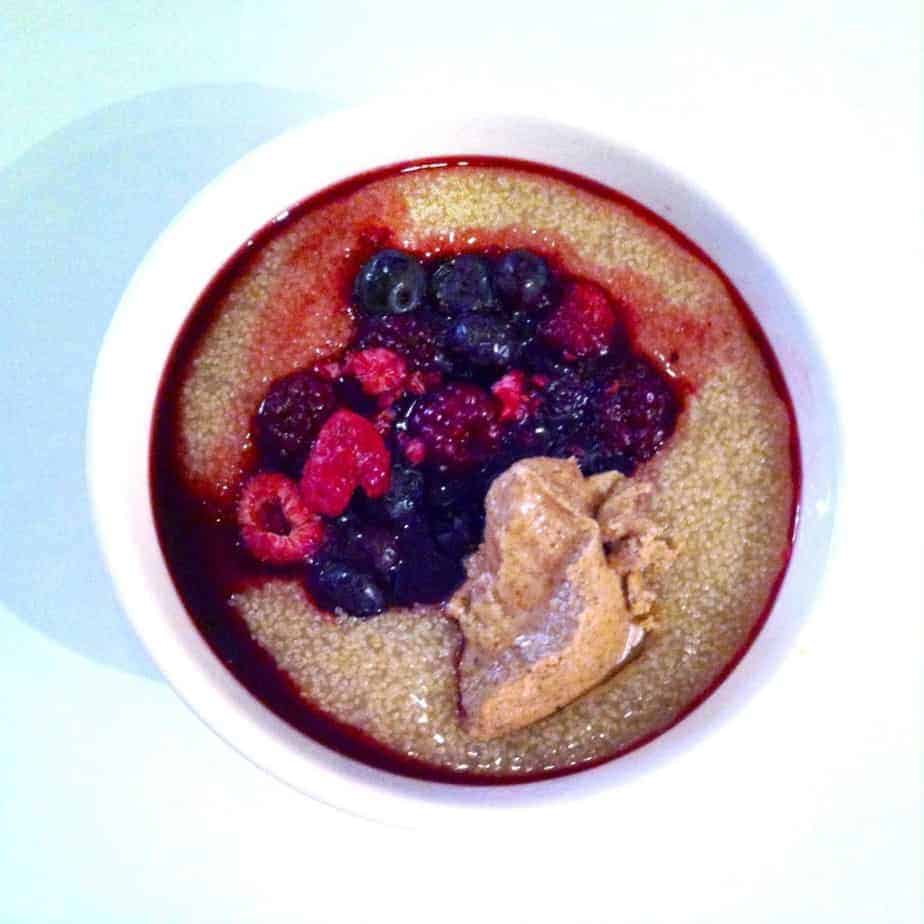 I bought some amaranth last week from the Whole Foods bulk bin on a whim. It's basically an ancient gluten-free pseudo-grain similar to quinoa, except it doesn't fluff up and separate when you cook it. It turns into more of a porridge consistency. It also has a whopping 7 grams of protein and fiber per serving, which is even higher than quinoa! Since I'm a total hot cereal fan, I brought ½ cup (for two servings) of amaranth and 1 ½ cups of water to a boil, then covered it and let it simmer for 20 minutes . It tasted pretty earthy, but I did like the consistency. Plus you really can't go wrong when your breakfast is smothered in Justin's maple almond butter and berries. 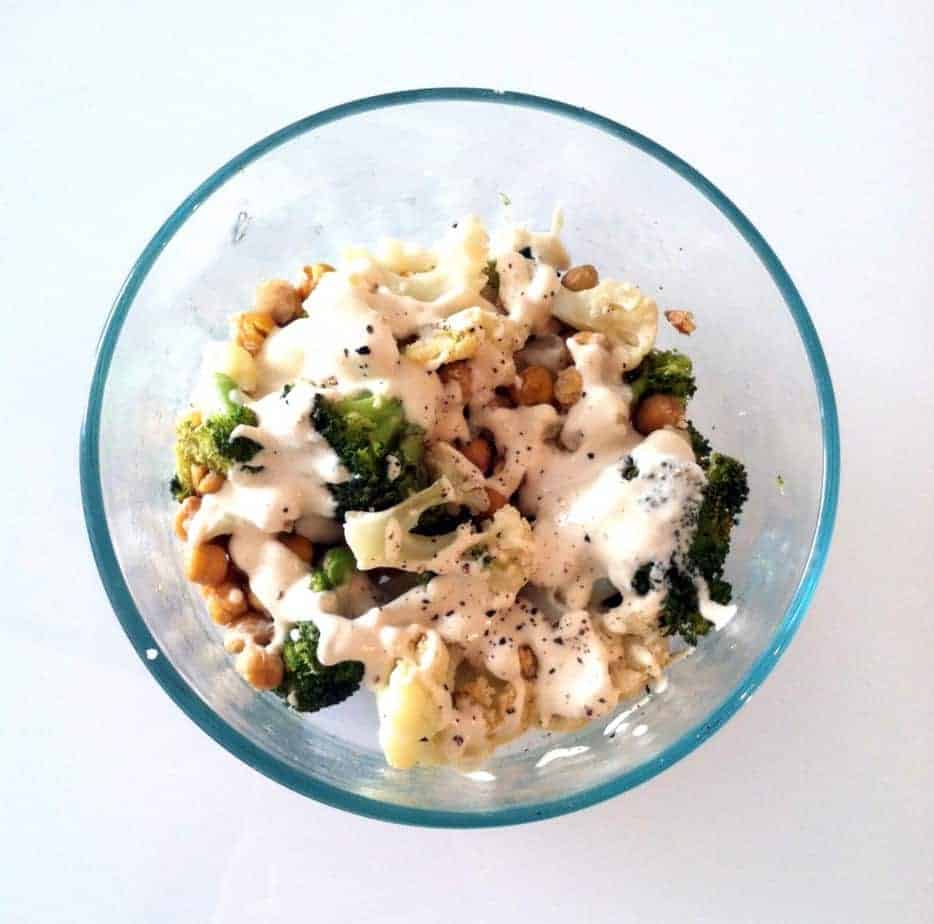 For lunch I had this leftover roasted buddha bowl with chickpeas, broccoli, cauliflower and this ridiculously amazing lemon tahini sauce, which is always a go-to recipe for me when I'm in a food rut, which I kind of am. No shame. 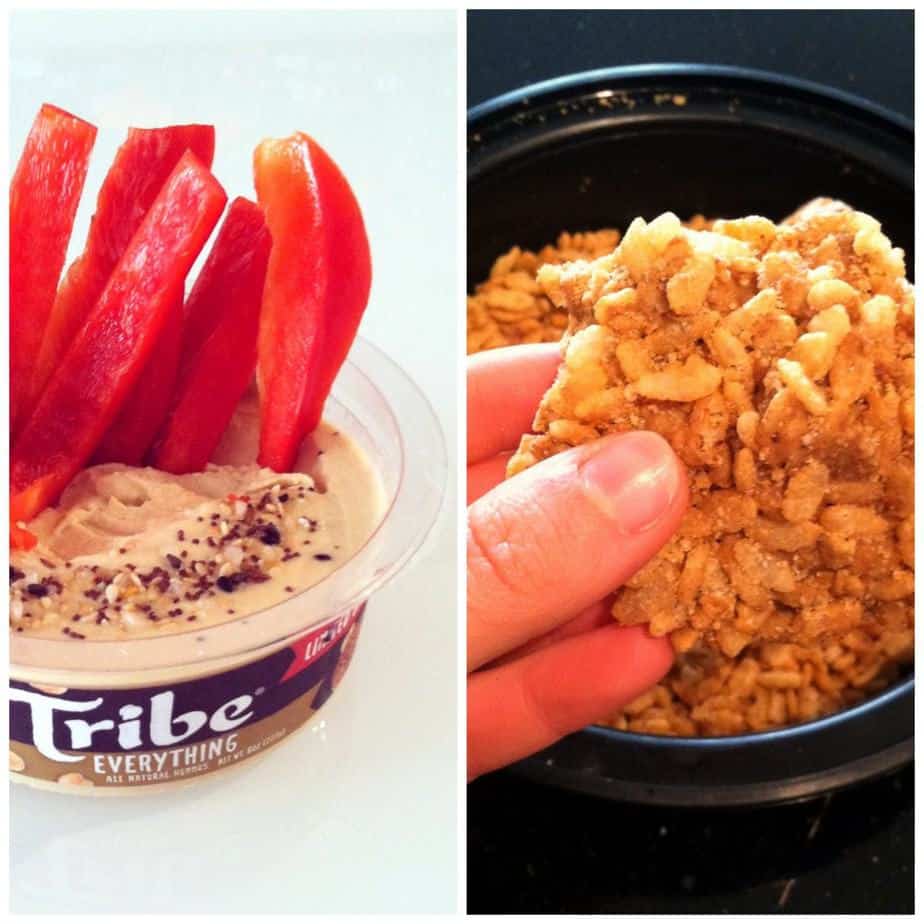 Then I snacked on a brown rice krispie energy bite (sans the chocolate), except mine didn't stick together so I've been eating it as cereal with almond milk which is the BEST.THING.EVER. Then I munched some more on red peppers with Tribe's epic everything hummus.

Today was chock full of snackity snacks in case you haven't noticed. I stopped at Starbucks for a cappuccino (my latest obesssion) before class paired with a homemade banana prune muffin (sounds disgusting, tastes pretty legit). You know I would never buy one of Starbucks's pastries complete with a bajillion and a half ingredients. #bringyourown 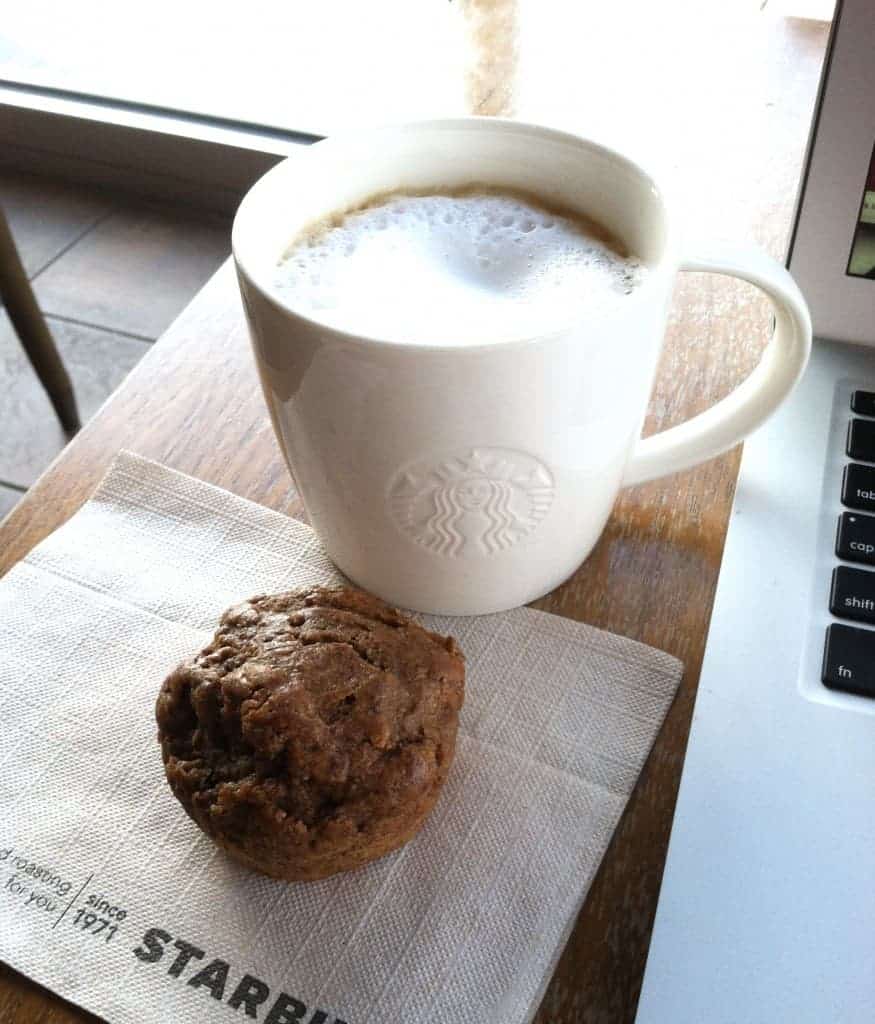 Ohhhhhh ya know and then I had a pumpkin spice energy bite and an apple. Then I was done snacking till dinner, I swear. 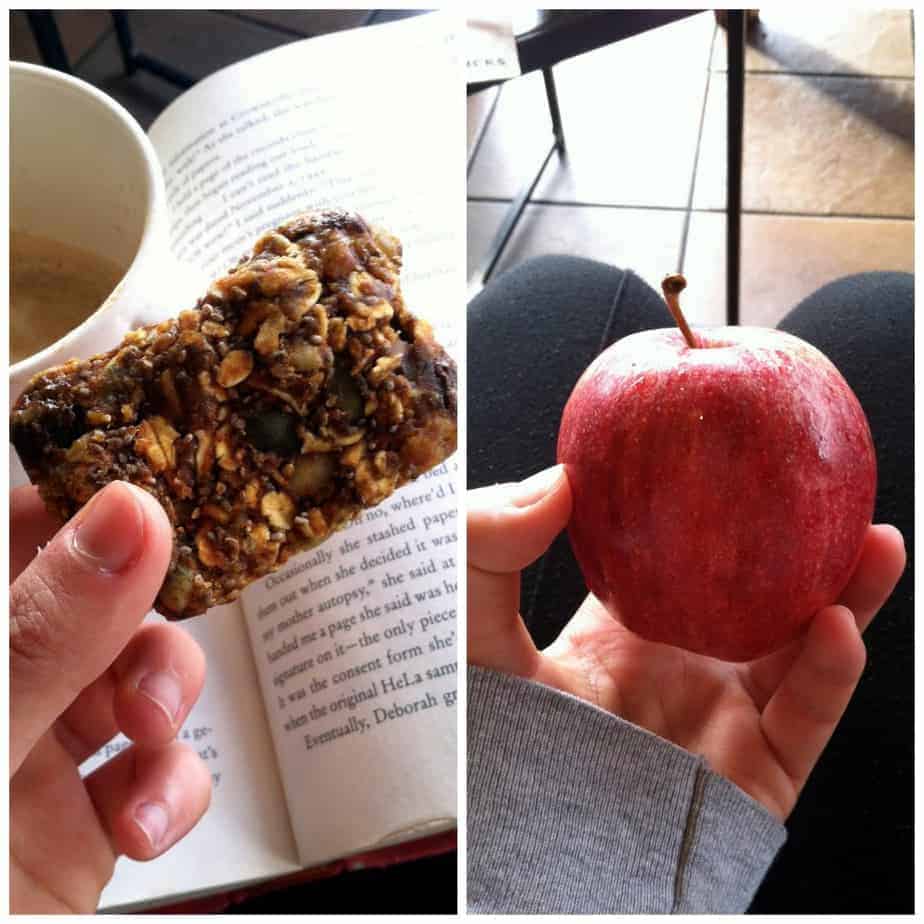 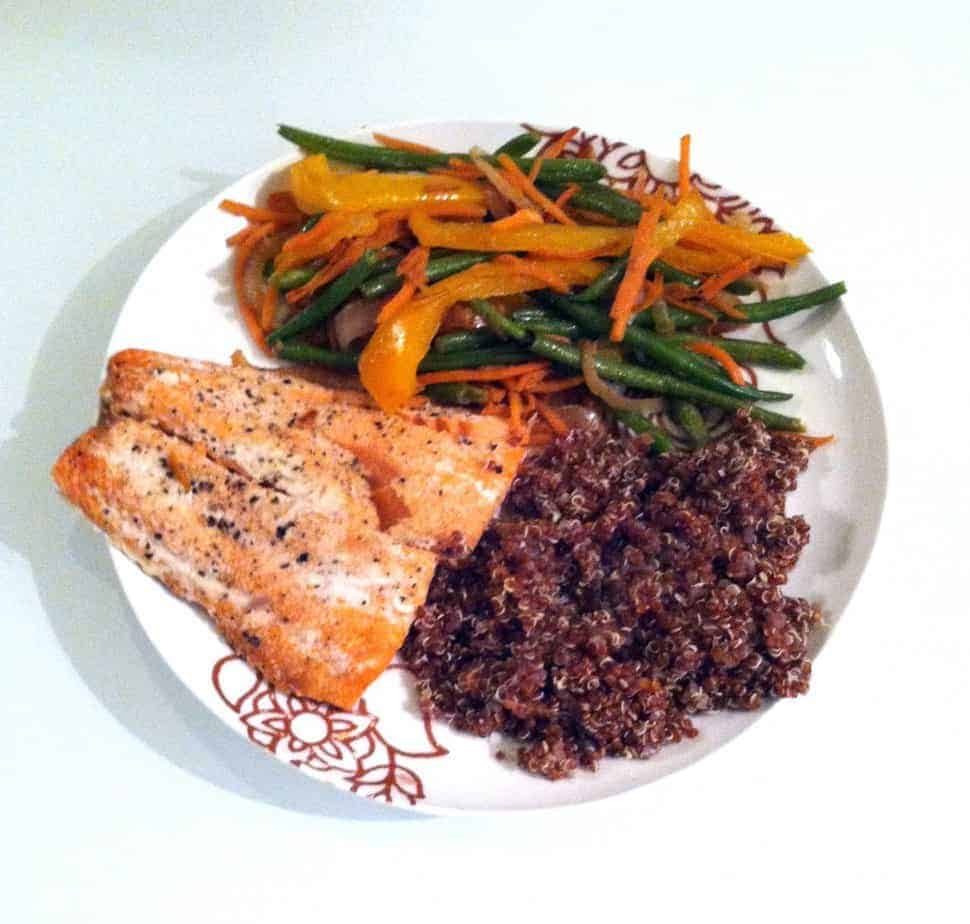 Dinner was a deconstructed version of my fave salmon and veggie stir fry. I use wild frozen salmon from Target (so convenient) that I defrost in the fridge all day paired with some green beans, sliced pepper, shredded carrot and onion doused in TJ's island soyaki sauce instead of my usual homemade version.  I switched it up with red quinoa on the side instead of my usual brown rice. 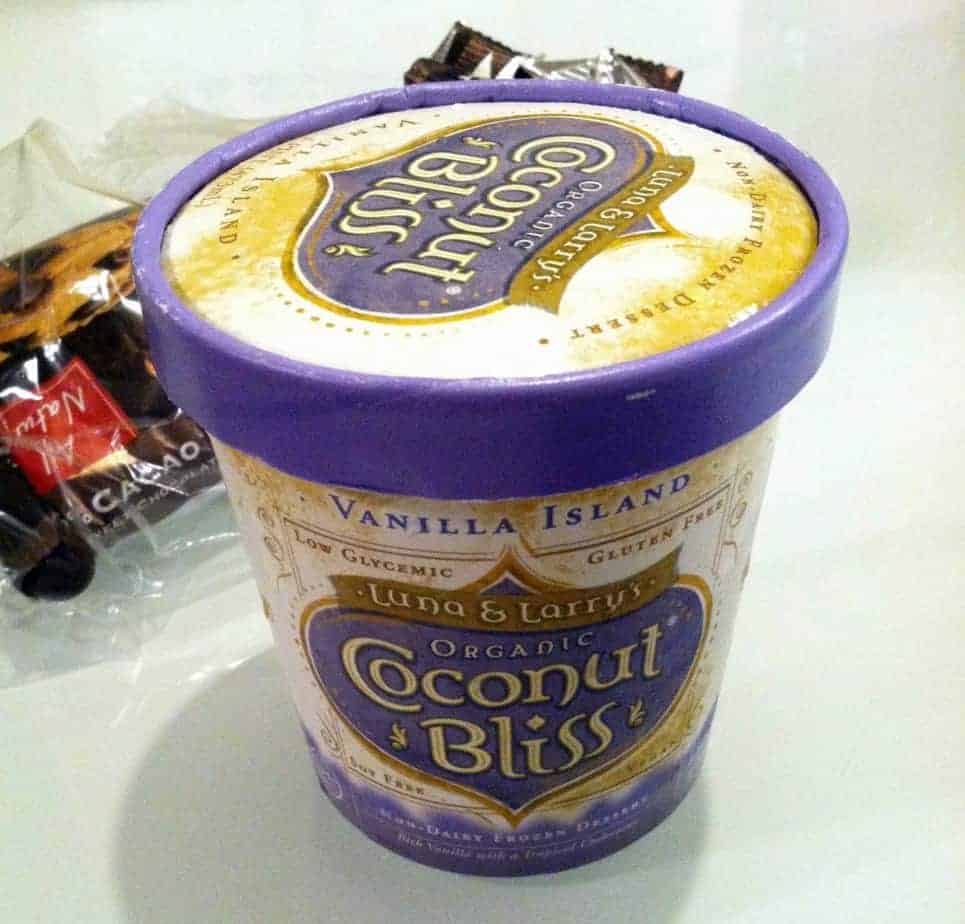 Ally brought home a pint of this insanely delish Coconut Bliss dairy-free ice cream....SO decadent. It's dangerous. I paired it with some dark chocolate chips, obviously.

What was the most humbelievable thing you munched on today? Do tell!