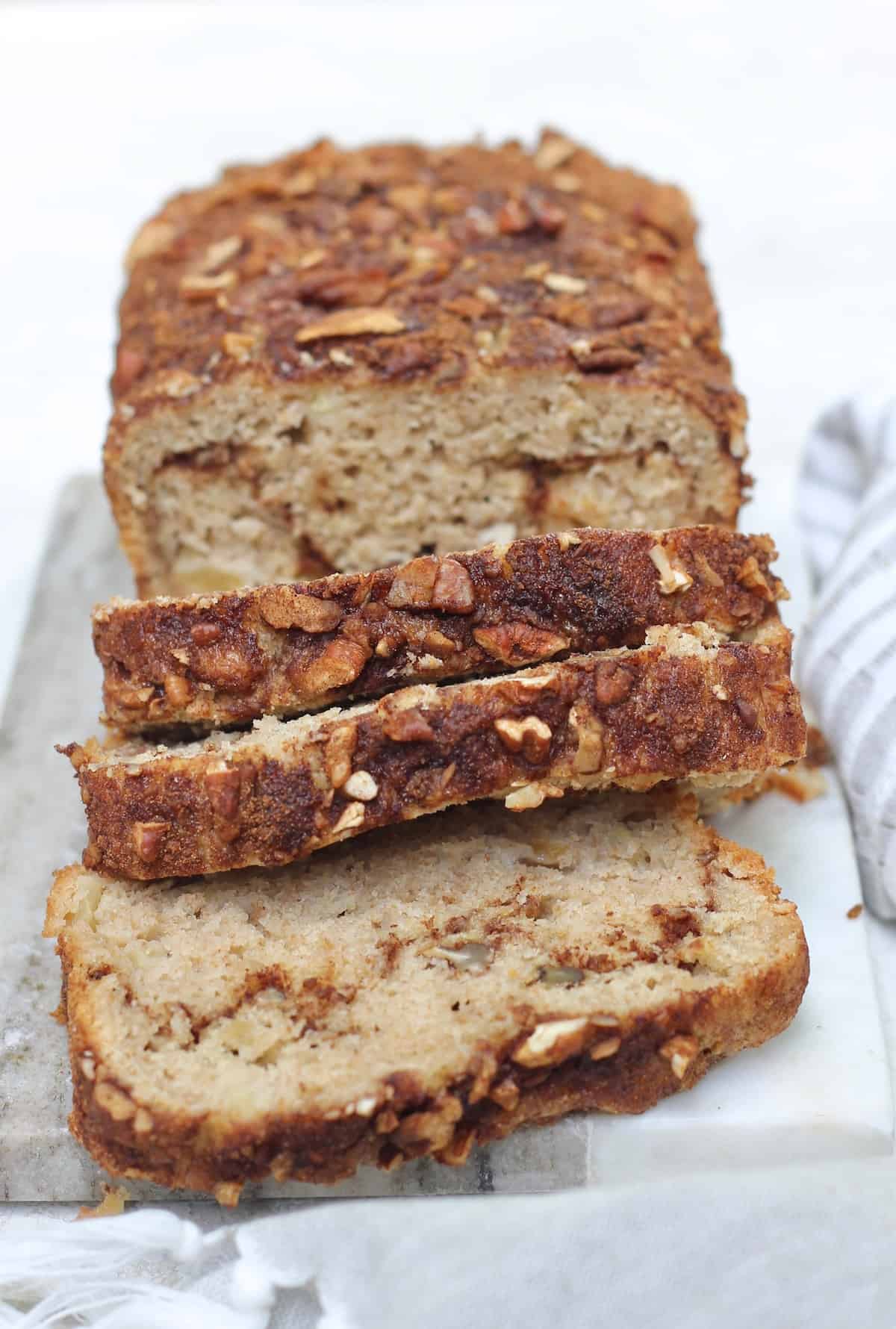 Does life get any better than this?!

Jeff and I enjoyed a slice with hot coffee every morning last week while I read my book and he caught up on the news. Then we ate it again for Rosh Hashanah! I could totally get down with our apple cinnamon swirl bread and coffee ritual on the regular.

This is of course a quick bread, not a yeasted bread. It's a super simple recipe that comes together in no time and makes the most delish dessert, breakfast treat, or mid-afternoon pick me up. This would be a great recipe to make with kiddos! 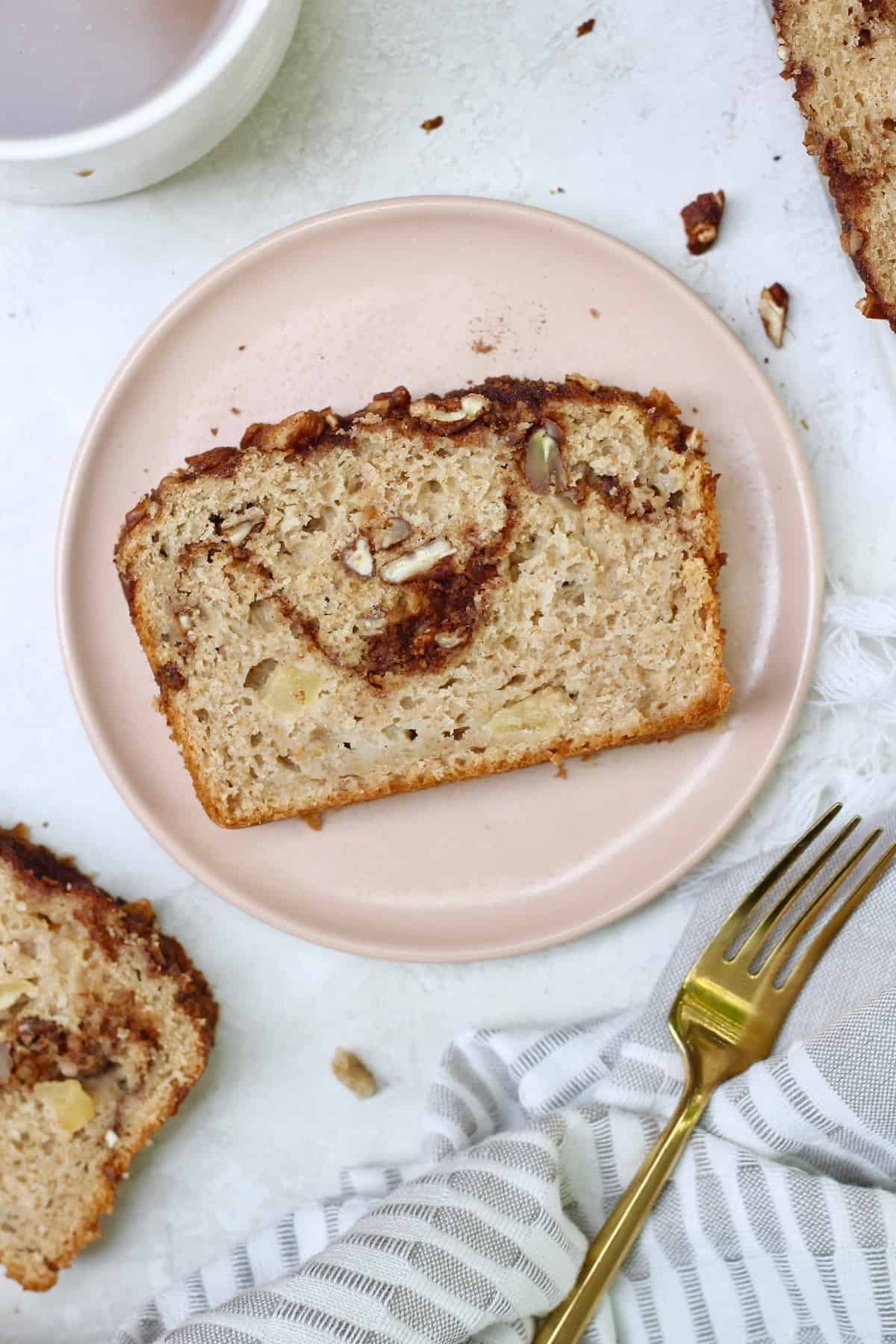 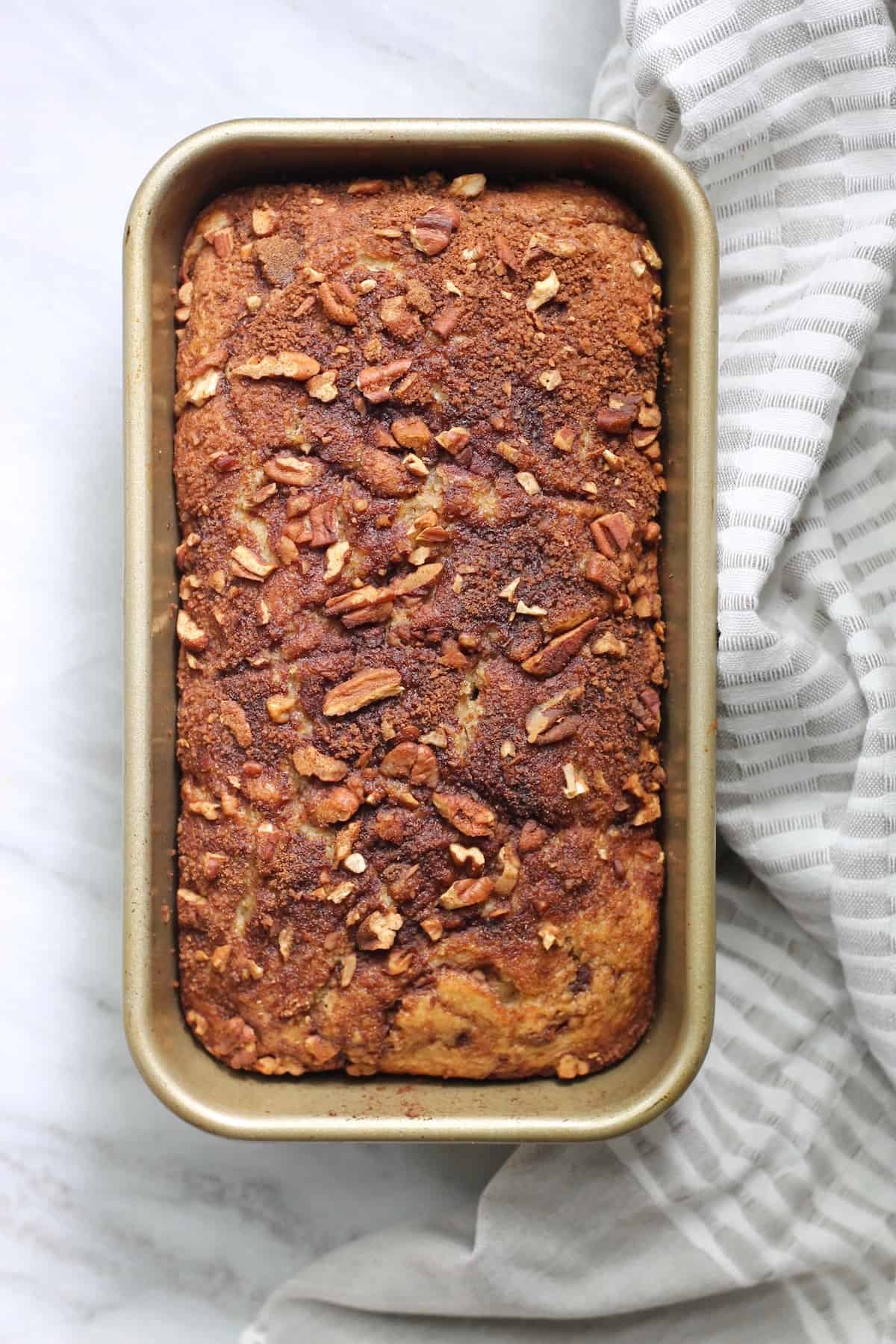 Wouldya look at that golden beauty?!

Which flour to use 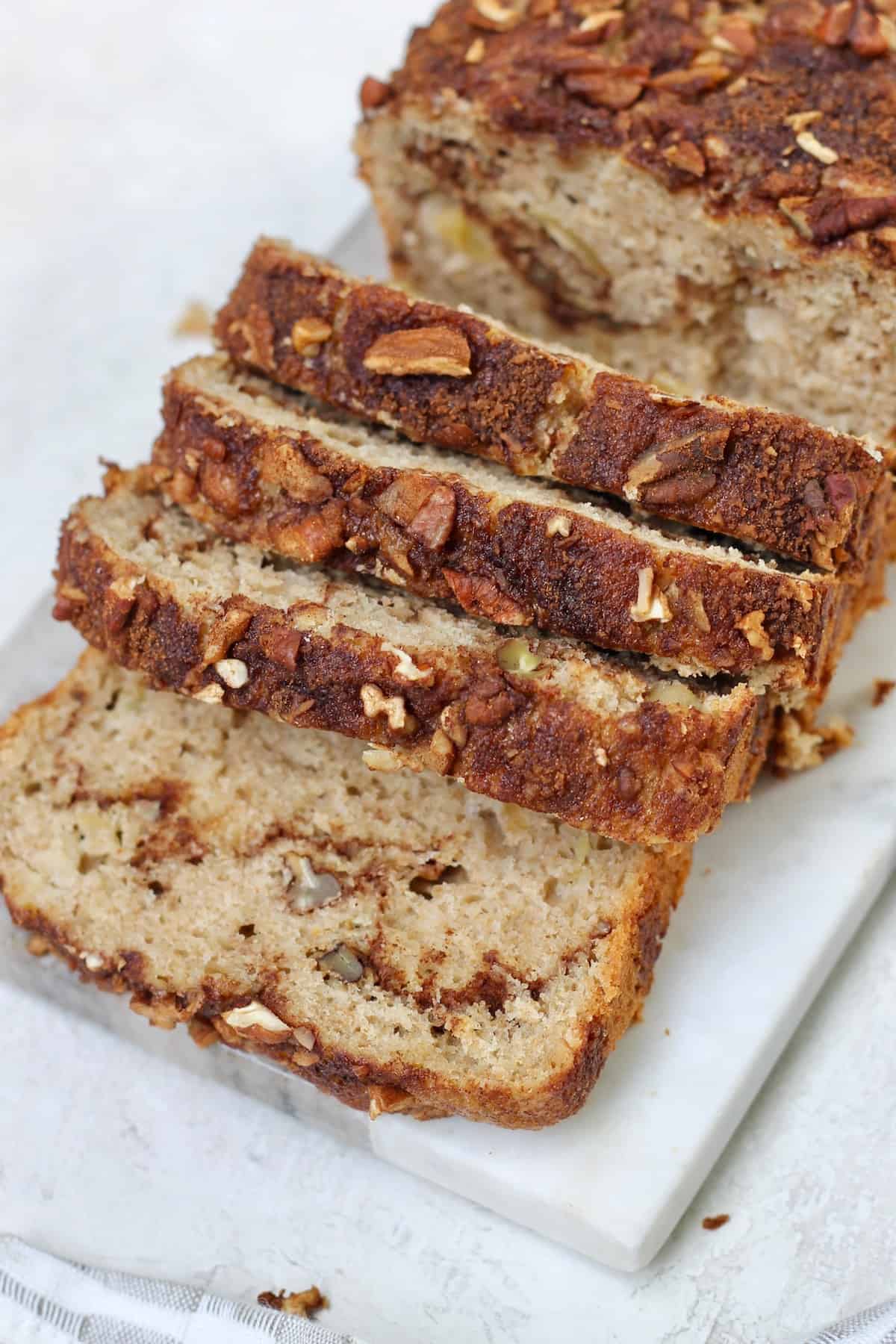 You can absolutely whip up muffins if you prefer individual portions versus a loaf. They cook in way less time, which is always a plus.

Simply make the batter, divide half the batter into the muffin tins, sprinkle with a spoonful of cinnamon sugar, and repeat with the remaining batter and cinnamon sugar. Swirl each muffin with a knife for that pretty cinnamon sugar swirl.

Bake for 8 minutes at 425°F then, keeping the muffins in the oven, reduce the oven temperature to 350°F. Bake for an additional 12-15 minutes or until a toothpick inserted in the center comes out with just a few crumbs. The total baking time will be about 20-23 minutes.

You can store this apple cinnamon bread on the countertop in an air-tight container for up to three days. If you still have some left, you can store it in the fridge for up to a week. Warm it in the microwave before serving and it tastes as good as new!

To freeze, wrap the loaf tightly in foil then in a plastic bag with the air squeezed out. It will stay fresh for up to three months. You can thaw it on the counter overnight when you’re ready to eat. 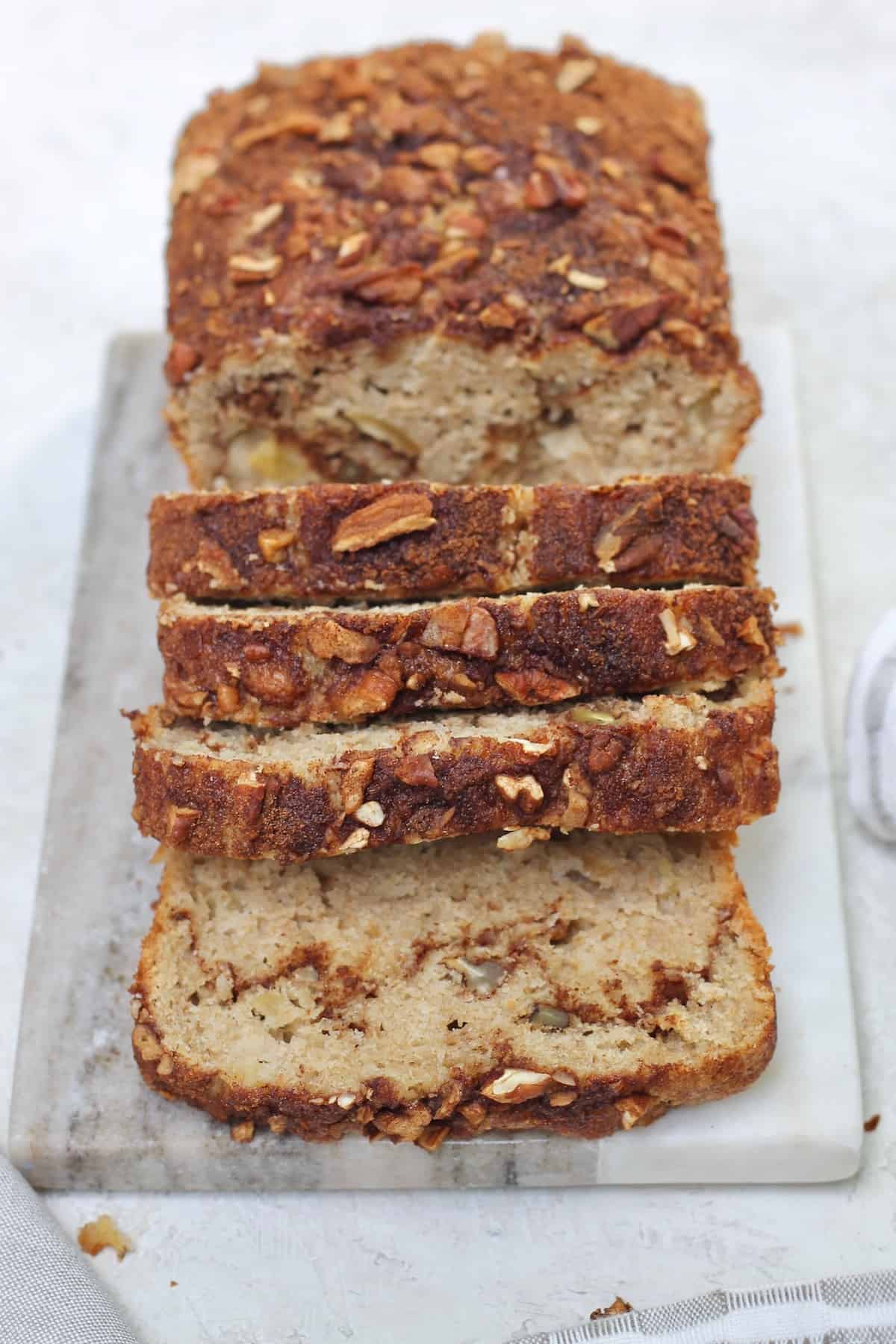 I hope you’re as in love with this wondrous Apple Cinnamon Swirl Bread as I am! If you make it, please leave a comment and star rating letting me know how it turned out. I’m so grateful for your feedback!

Adapted from this recipe.

*Be sure to measure the 1 cup of diced apple. Using more can make the loaf too moist!

TO MAKE GLUTEN-FREE: Some readers have commented that they've had success with Bob's Red Mill 1-to-1 all purpose gluten free baking flour, but I have not tested it. Do not substitute other flours like almond, oat, or coconut as they will not work in this recipe.

TO STORE: Store leftovers in an air-tight container on the counter for up to 3 days and then transfer to the refrigerator for up to a week. It tastes great reheated in the microwave!

TO MAKE MUFFINS: Divide half the batter into the muffin tins, sprinkle with a spoonful of cinnamon sugar, then repeat with remaining batter and cinnamon sugar. Swirl each muffin with a knife. Bake for 8 minutes at 425°F then, keeping the muffins in the oven, reduce the oven temperature to 350F. Bake for an additional 12-15 minutes or until a toothpick inserted in the center comes out clean. (Total baking time is about 20-23 minutes).