What’s In My Fridge

What’s In My Fridge

If you’re anything like me, you ADORE seeing what other people eat.  You  also adore seeing the goodies in the fridge that are the very foundation of what those people eat. 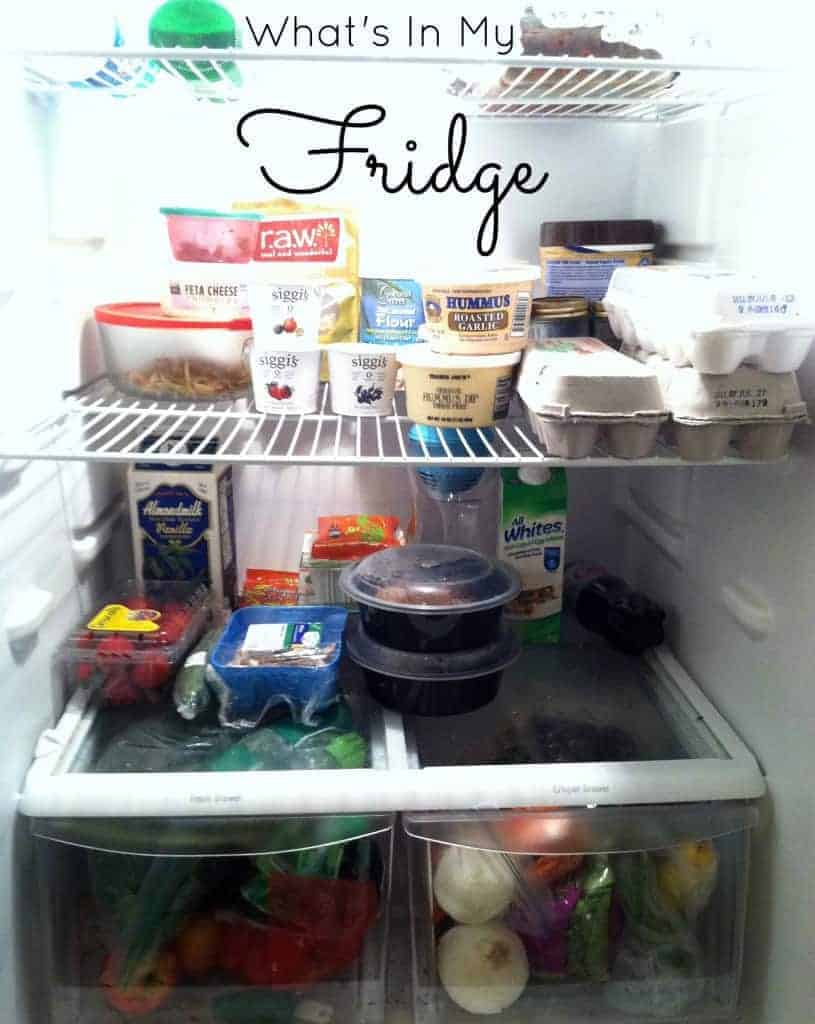 It’s not weird. In fact it’s totally normal foodie behavior. It sparks fresh ideas and serves as a terrific motivator to clean out your own fridge. By “clean out,” I don’t mean bust out the Windex and go cray on the produce drawers. I mean “clean out” as in get rid of all the crapola and replace it with clean, healthy food.

Oh, and I don’t even need to tell you that the Diet Coke is most definitely not mine.

Because I stick mostly to clean eating recipes here in this little space, I haven’t written many posts about healthy living in general. I have a whole lotta advice to share, so I’ll try to let you in to my life a wee bit more on the healthy living front. In my opinion, there’s nothing more inspiring than seeing how others around you strive to achieve their health goals.

Since my two roomies have been out of town for a while, everything you see in the fridge is pretty much mine (besides the condiments on the side). I always have a weirdly large amount of food in the fridge. When I’m grocery shopping, people probably think I’m shopping for a family of four. But since I go through fruits and veggies like a mad woman, I always make sure to have a lot on hand. If they’re there in front of your face, you’ll eat them. The same thing goes for the unhealthy stuff; if you don’t buy the carton of ice cream, you can’t eat it.

Let’s start here. We have a carton of strawberries to snack on, mushrooms for salmon stir fry (recipe coming soon), a cucumber, two baked sweet potatoes for zesty sweet potato black bean burgers, and a piece of wild salmon defrosting beneath it. I always keep organic extra firm tofu and tempeh on hand as well. You’ll also notice a spare unsweetened vanilla almond milk  for smoothies, cereal, etc. in the back. I try to grab an extra whenever I hit up TJ’s because I go through it so fast. If I have the munchies but have already eaten a ton (per usual), I often microwave some 100% egg whites in a small bowl and eat them with hummus and hot sauce. It’s a good high-protein snack when you don’t feel like prepping something. 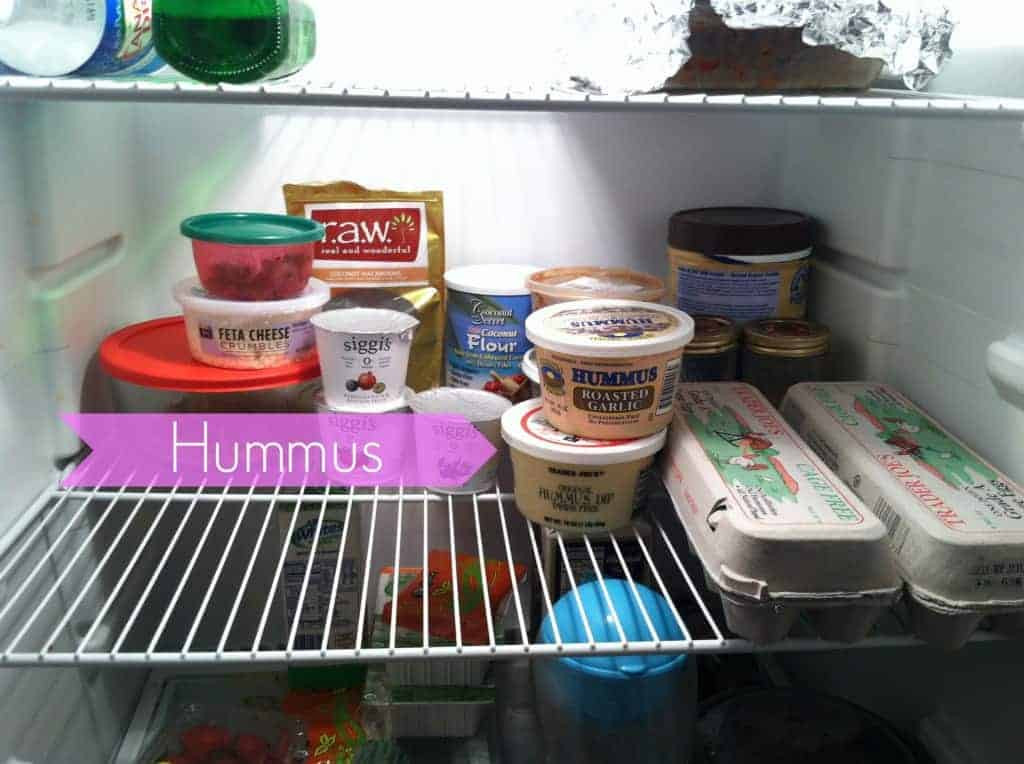 At the very top, there’s a pan of skinny vegan lasagna leftovers for quick dinners throughout the week. I don’t buy yogurt often, but Siggi’s was on sale at Whole Foods and I love both the simple ingredient list and low sugar content. Most Greek yogurts have around 18g of sugar and this one only has 11g. It’s perfectly sweet for me and beyond delish with this granola. In various Tupperware’s are roasted beets to throw in salads or in my mouth, leftover asian broccoli slaw, two big containers of hummus, some R.A.W. macaroons, a container of dates, homemade honey balsamic, coconut flour, RAW protein powder and lots of eggs. 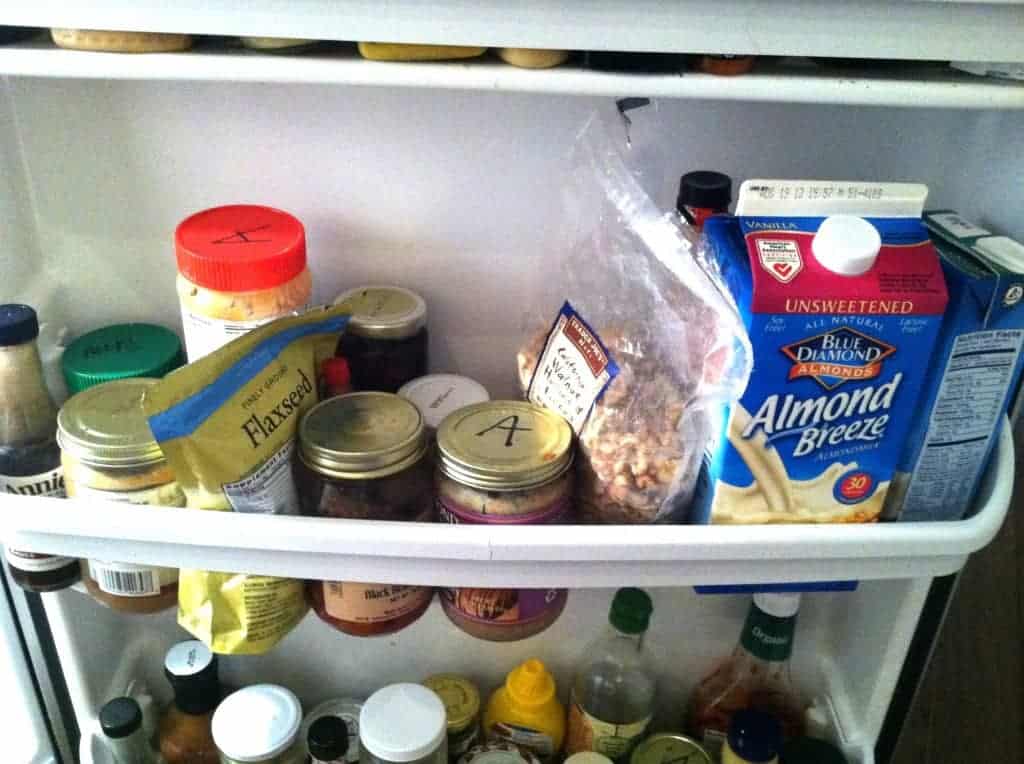 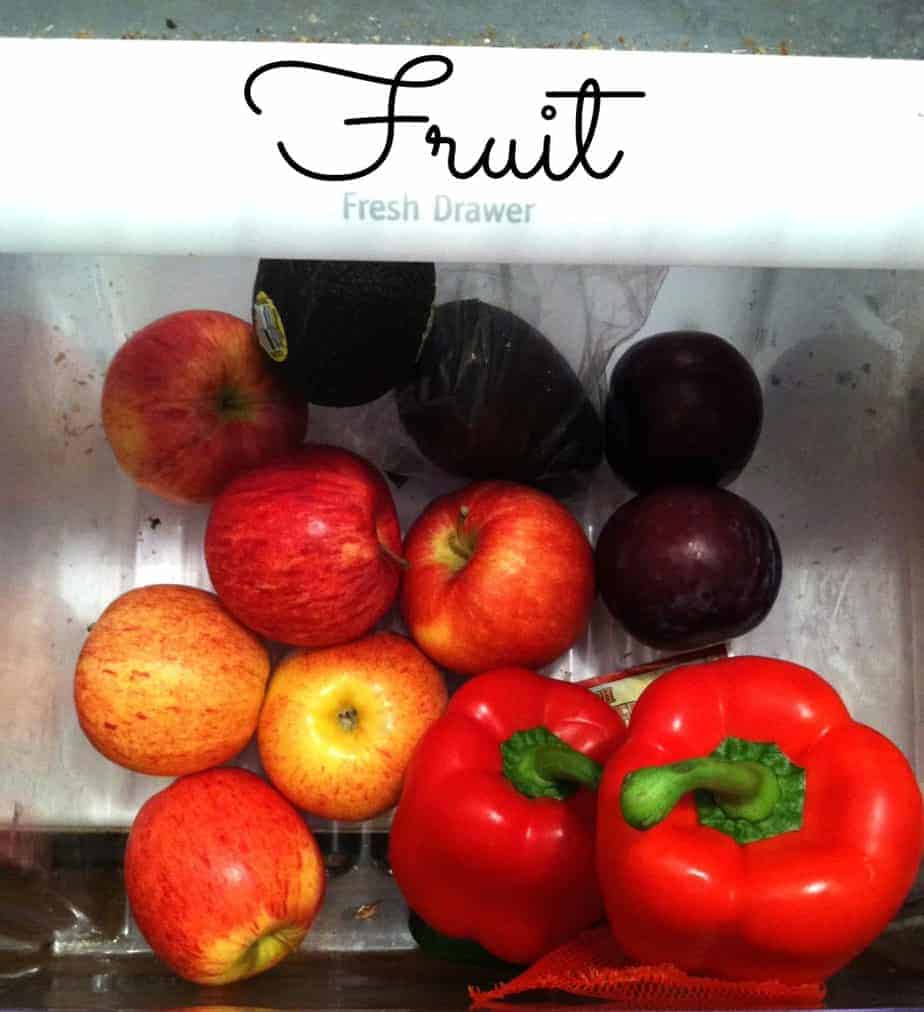 In addition to the bananas on the counter and the strawberries above, I had lots of organic gala apples, red bell peppers, organic plums and avocados.  There’s also a boatload of frozen fruit in the freezer because fruit’s da bomb. 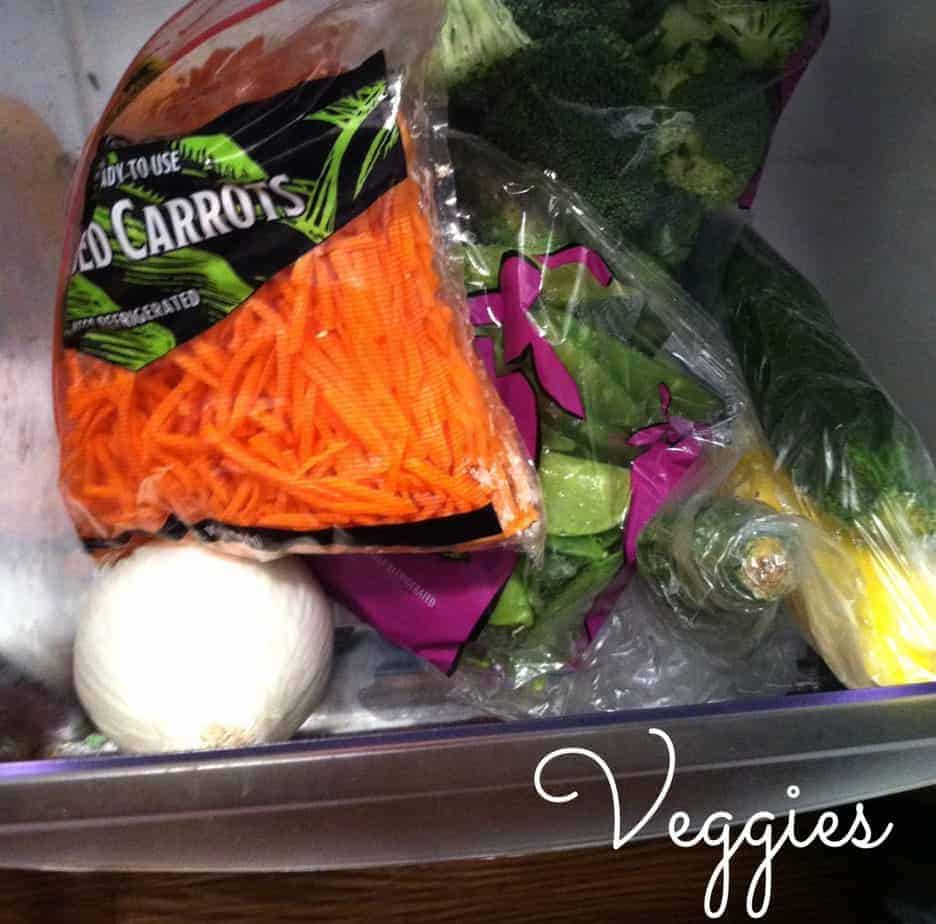 Always having tons of fresh veggies on hand is key to a healthy whole foods diet. Here we have zucchini, squash, snap peas, broccoli, carrots and an onion (plus the cucumber and mushrooms above). There are sweet potatoes on the counter, too. 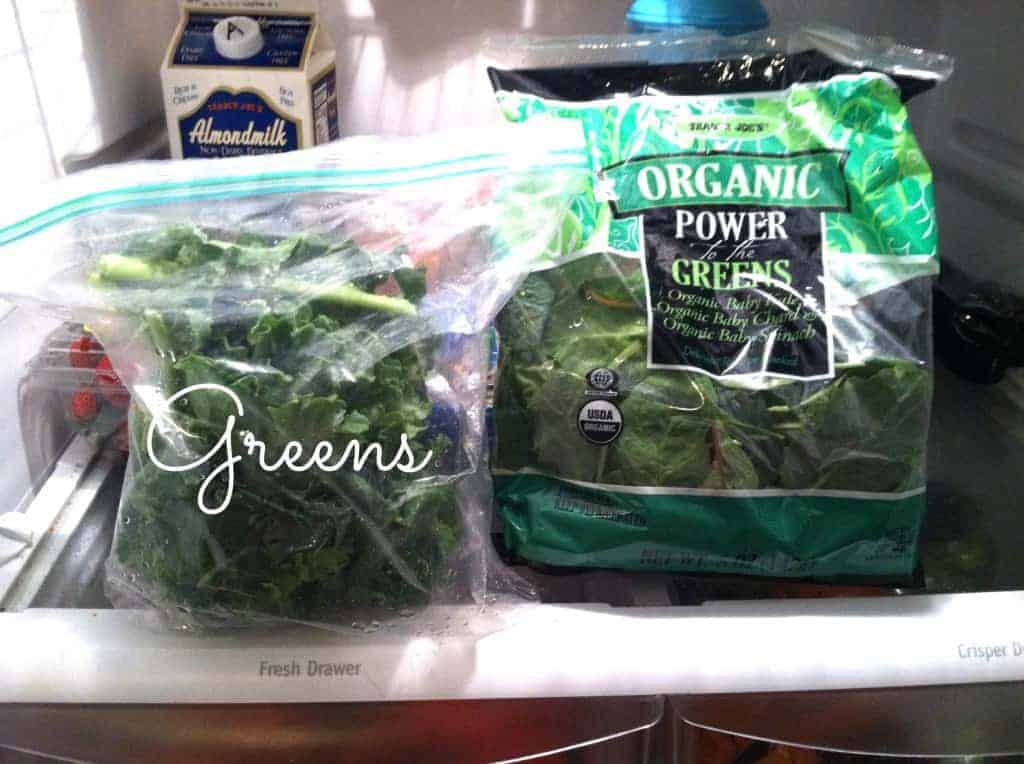 Be a lean, mean, green machine. Here we have fresh kale from the Garden of Hope plus my fave power of the greens mix (kale, spinach and chard) from TJ’s. I  use my greens mostly in smoothies but I throw them into salads, eggs, etc. as well. Once I get my hands on 50 Shades of Kale, I’m sure I’ll have some fab new ways to use kale to share with you guys.

Aaaaand here’s a quick look at the freezer. 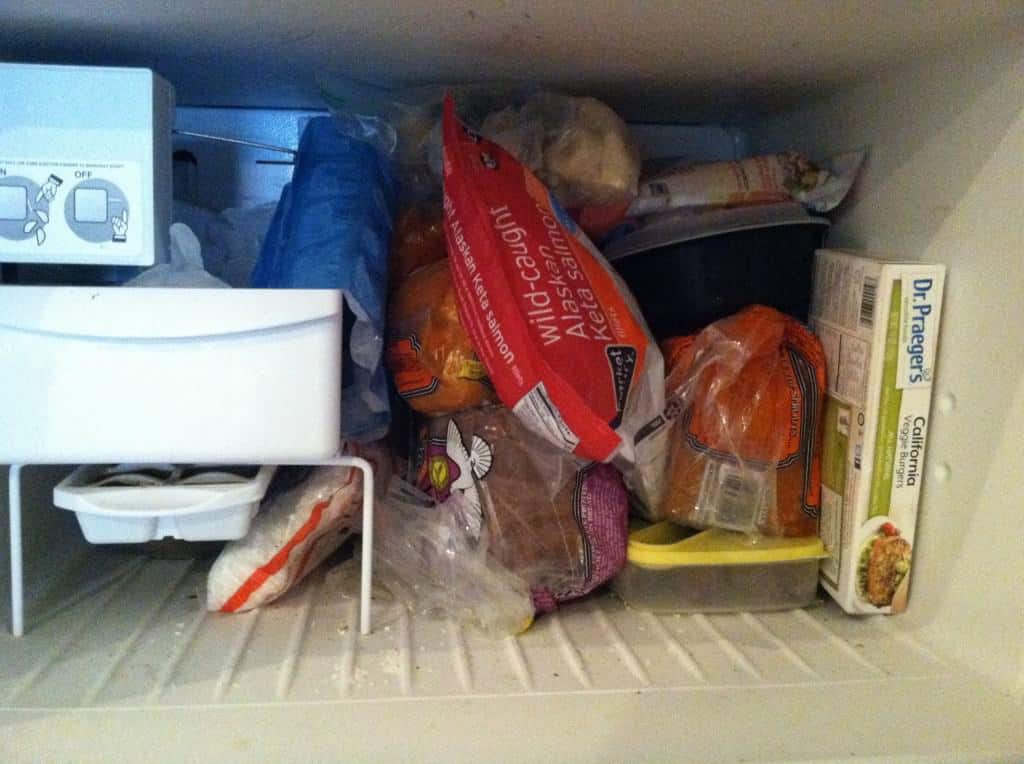 Okay…these are not in my fridge. They’re in my pantry. They deserve an honorable mention because they’re insanely good. And the dark chocolate is 73%, so it’s like antioxidants on the wazoo fighting off all the yuckies in my bod.  They won’t be in the pantry for long (aka they’ll be in my belly). 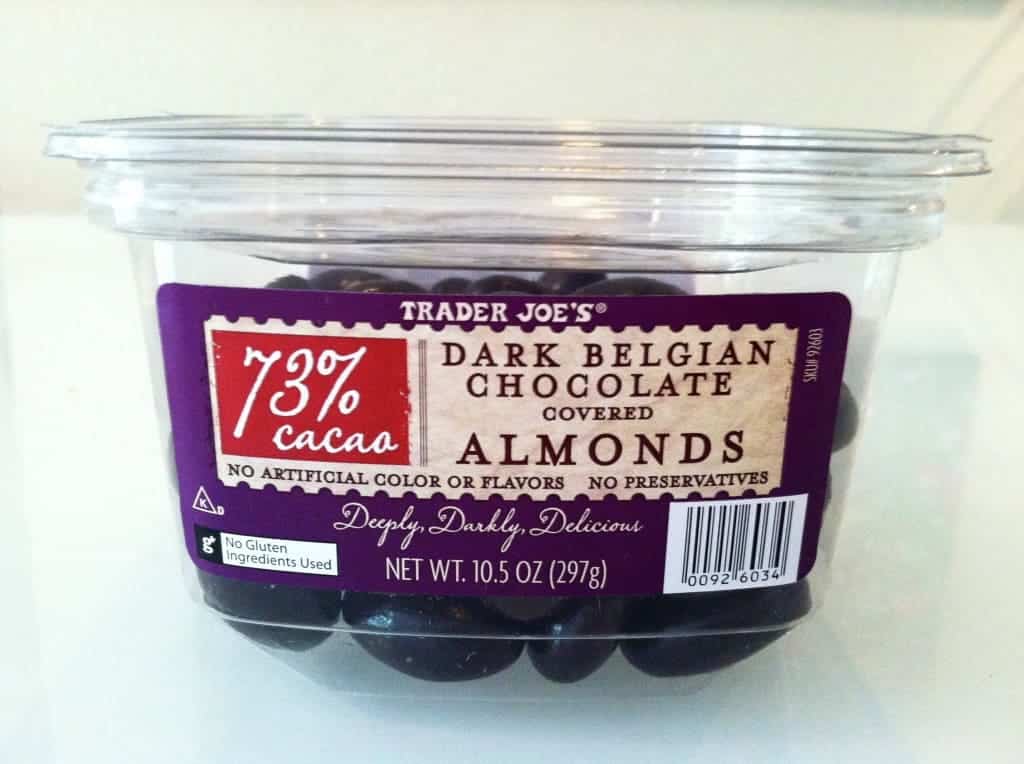 What’s in YOUR fridge? Tell me tell me!